Over the last two voting sessions, the Community has seen a lack of voter turnout. The recent Inclusion Poll for MIP12c2-SP4 - LRC Collateral Onboarding had a turnout of 8 unique voters. The Poll: Adjust the BAT-A Risk Premium had a voter turnout of 5 unique voters. Both Polls were swung and unanimous decided by ONE voter.

As a Community who strives to improve, we need to learn why there’s a lack of voting participation. Is it based on the old theory of socio-economic status: the Wealthy vote at much higher rates than those of lower socio-economic status? Unfortunately that’s not the case here, as Large MKR holder do not participate as well. We as a Community need to ask, why are the Large MKR holders not showing up to Rock the Vote?

Please take a moment to answer the following🎭 Poll and let the Community know why you haven’t voted, or will not be voting in the current, or future upcoming Polls & Executive Vote:

Why do you believe large MKR holders are not highly active in Voting?

Nothing works without incentives and punishments.

Interesting opinion–Sam Williams the Founder of Arweave did a lecture on A16Z Crypto Startup School, and he’s a proponent of incentivising. Did a talk on how to capture value and design proper incentives.

Few people have the time to study all of the polls. To much micromanagement.

Is there a subscription system for poll notifications? Nobody wants to check the governance page every day.

Nothing works without incentives and punishments.

I honestly think we need some sort of voting incentive system. Receiving a percent APR in mkr based on voting and locking mkr for x amount of time, much like staking incentives. We also need a delegation system in combination with this that produces the same yield. This would create some mkr inflation, but would likely increase engagement from mkr holders at large, increase security of the protocol, and pull in outside crypto folks who are interested in yield.

There are number of questions around uninformed voters voting simply for yield, but I think these issues can basically be mitigated with delegation, since small voters would be incentivized to delegate via lower gas fees and lower effort. Depending on the requirements to be a delegate, this could also be a way for active and trusted community members to sway votes on subjects even if they do not have the capital to be a mkr voting “whale”

I don’t really have enough MKR to be meaningful, but what I do have is in a liquidity pool earning fees. There is an opportunity cost to pull that out to vote, plus the obnoxious gas fees.

I don’t know how to get around gas fees without L2 solutions, but I do wonder if we could allow voting with LP tokens as well.

I think a lot of us are coming to this conclusion. Has anyone else begun discussing the next steps that would be necessary to implement such changes? I know delegation and more efficient voting are on their way with the new governance module being developed, but also including vote lockup/rewards would be an added bonus. Should we draw up a MIP to have these features included in the new governance system? I know @MakerMan has had some good ideas on this type of implementation. There are so many great features in different governance platforms that we could take from. COMP/Curve/KNC all have features I think would really complement and add to the existing governance structure.

For me it is a combination of high gas prices and the importance of my vote in terms of weight. There just isn’t enough incentive for me to vote when my vote isn’t going to sway anything. If I personally feel a particular vote is important enough to speak on I will and have but the rest of the time 10 or even 100 MKR doesn’t seem that important in most of these votes.

There is also an issue of whether a vote should be decided by something at little as 1, 10 or 100MKR. What does it mean if governance is effectively split on an issue?

Personally I would like to see greater participation by larger MKR holders but that appears limited at best. Here is a better question. If someone who holds 10-50K MKR can’t be bothered to vote why would someone who holds 10-50 MKR? One could argue that only 50k MKR voting means 100MKR voting votes for 2000MKR but I have heard that before and while somewhat true it doesn’t make 100MKR vote 2000MKR worth.

One suggestion I wanted to see in the governance portal was seeing votes weighted by MKR and votes weighted by WALLET so we could get an idea of whether there is a signficant difference between these two different ways to tally a vote. Right now I don’t have a good feelling about this. Perhaps I am missing something but mkrgov.science doesn’t really tell me in an easy way how many wallets voted in total except perhaps by drilling down into each vote one-at-a-time.

Another thing is that governance website - where some of us vote - is so bloody slow to load, then we have to drill down into each option to vote on it. Put simply the amount of time to vote is high, costs to vote only growing, and actual meaning of our vote not really easily observed. There is no real reward to voting.

There were also events in the past - during/after BT and our emergency votes that it was clear when whales wanted what they wanted it didn’t matter what the community might have wanted. I can’t remember what vote exactly it was - maybe @LongForWisdom will remember. I just remember it was on a Sunday and literally vote passed in less than 2hours as if others were all ready to go. Really sent a strong message to me that whatever I might have thought and wanted was irrellevant to the real governance powers that be.

Delegation is key. Check out KNC’s kyber.org or Compound governance. Both have delegation options and I’m sure this is a major priority for the Maker team working on the portal rework (at least I assume so).

Does not work. The MKR can be split between wallets.

Does not work. The MKR can be split between wallets.

Doing a tally by how many wallets voted vs. how much MKR voted actually is quite easy. I think the plurality % is trying to show that but without the total number of voting wallets a plurality % doesn’t tell me much. My suggestion was to add this metric to the governance data portal mkrgov.science not to change how MKR votes.

I also agree with others that delegation could help here.

It forces delegators to openly take stances so you know why people vote the way they do. @monet-supply does a great job breaking down his reasons for voting for specific proposals on twitter and would make a great delegator in the future. I’m sure we will see more community members do this in the future. I would also like to see other monetary incentives for voting in the future to further entrench governance participation as free riders are a real problem.

high gas fees: I was a regular voter, but high fees are just too much at the moment. Voting was not a rational thing to do (importance of my vote is negligible), but it kept me more engaged since i’ve read more posts on this forum.

If we disregard governance contract changes, better UI for governance could be prioritized.
Unfortunately contracts and UI are coupled, so any change to the contracts would break UI.
So, it’s not as easy as to just incrementally improve UI.

I also agree with MakerMan about visual hinting for polls where wallets and mkr votes are
at significant difference. I think it would be very useful to label and easily track whale voting.
mkrgov.science is less than perfect atm (I agree with MM).

I am very sceptical of incentivizing the voting. You will just get more votes, but unlikely
more informed voting.

In this crypto world, if you want people to participate you need more incentive than just owning the token and hoping it appreciates in value. We need more participation any way we can get it. This is not the old school way of running a governance system nor should it be. I hear this argument about uninformed voters a lot as the main rebuttal. I think this is a bad assumption. Unfortunately I have no data to back up my own assumption so we’ll have to agree to disagree. How much damage would someone looking to vote just for rewards actually do to the system. Hell, I think most whales barely pay attention to whats going on as most don’t even vote, and they have the most to gain! I would think that if most people are going to vote for rewards they’d either delegate to someone with more knowledge (and still receive a reward) or do a minimal amount of research so they don’t feel like an idiot. You could then have politicians than educate the voters into why a certain stance is necessary. Right now we have a participation problem. What is your solution to overcoming this? Time? Cause that ain’t working.

I guess the the only other solution I can think of would be to reduce the barriers as they stand. UI loads faster, gas is cheaper (free), transactions faster (L2, etc), more analytics / feedback from voters. If we try all of those first and then we still have a participation problem, its time to start thinking plan B.

We’re funding the Abridged team to work on this @OKDuncan

Come on, get in there and Rock the Vote! 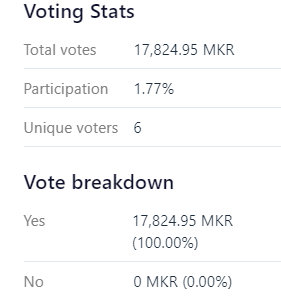