Dai on Different Chains - Where is my Dai?

The bridged Dai total on BSC has remained largely unchanged, though the majority is held by the Binance EX rather than a yield farming platform.

Special thanks to @SebVentures. Bookmark his database for accurate, easy-to-read tracking for Maker analytics of all kinds.

Dai usage on Polygon has risen from around 418 million DAI to over 567 million, peaking at 652.9 million DAI. The majority is held in two pools:

Iron Finance identifies as a “partially collateralized algorithmic stablecoin” and operates on the BSC and Polygon chains. The project made headlines earlier this year after its stablecoin (IRON) fell off its dollar peg and its governance token (TITAN) fell to near zero.

This represents a relaunch of the same, with alterations made to its protocol. It has yet to go live, but its contract is the largest Dai holder on the Polygon network at over 36.2% of the market share - or over $205 million in DAI.

The spike in bridged Dai began in early July and peaked on the 15th.

Iron Finance rose to over 48% of Dai’s market share on Polygon, but has since since evened out with Aave.

Aave wallets hold the second highest Dai total, amounting to 34.1% of Dai bridged to the Polygon network - or around $185 million in DAI.

Aave was last week’s Polygon majority holder with over 51% of the network’s Dai market share, but additional Dai has been bridged, and funds have been removed from Aave and placed in Iron LPs.

Aave’s Market share fell drastically mid-week, but has since recovered.

Layer-2s still only represent a small portion of the total Dai supply.

Have anything you’d like to see added to these breakdowns? Leave a message in the comments or DM me, @seth, or @Jerry.G.

In xDAI they take into account what parameters for the Holders? well I know that there is also a DAI token there that has n value of 0.61 xDAI. And we know that xDAI = DAI in ERC 20

Yeah, xDAI’s token information is definitely a bit limited. Probably going to update to unknown - there’s just too much supply missing from the ERC-20 contract to call it a fair estimate. Thanks for catching that.

Any chance you have a link to the token contract you’re mentioning? Definitely something to look into.

I find it very curious, because if xDAI is already worth 1 DAI of ERC20. and wXDAI complies to be compatible as a token. Then why create this DAI TOKEN? 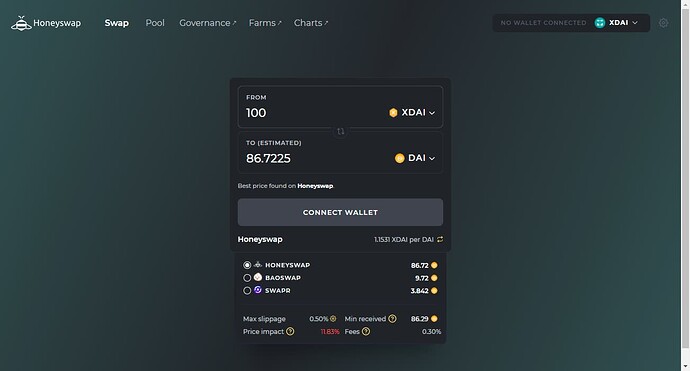 Wow, I am shocked that Iron Finance came back somewhat…

I am shocked that Iron Finance came back

And with the same busted economics as far as I can tell. It’s not technology that did them in last time, it’s how they’re fragile to that kind of market condition. I hope they’ve got some backstops built in this time

It is quite curious, what could affect such an uneven change, liquidity?

I think you have to have a lot of hope to use this protocol again, how incredible that it will come back.

It is quite curious, what could affect such an uneven change, liquidity?

There are only 80k DAI tokens in the xDAI network.

Maybe that explains the low liquidity

Tough to say where exactly the rest is, but Blockscout gives me a few guesses.

Just found this for xDAI tracking. 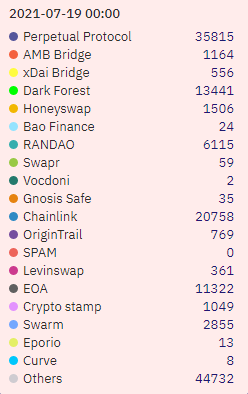