If you missed last week’s update, here’s a link to Dai on Different Networks #12.

I created a dashboard to track some of the stats I’ve been reporting in real-time. Dune Analytics currently tracks Ethereum and Polygon proficiently, but databases for the other L1s and L2s are limited or non-existent - BUT more are being added every week. As more information becomes available this dashboard will be updated!

With the dashboard now available, we’ve made some changes to the format; namely, an extension of the highlight section and a pivot to focus on any anomalies seen over the course of the week. Hopefully, this format will prove to be a more valuable week-to-week format. As always - we’re open to any and all suggestions.

Now, on to the meat and potatoes.

Liquidity Mining Incentives have become the new normal in our multi-chain world, with each announcement boasting a higher and higher total.

This can be seen with Polygon’s $40mil program, Algorand’s $300mil program, Fantom’s $370mil program, and now Avalanche Rush - a $700mil program bolstered by an inital $180mil from the Avalanche Foundation, as well as large contributions from Aave and Curve.

As the Rush began a slew of announcements came from the AVAX team, including:

In the wake of the news another 12 million Dai was bridged to the network, primarily into Benqi and Trader Joe.

On the other hand, Solana saw a massive drop-off of over 11 million Dai or an 81% decrease in week-over-week circulation.

The timing comes after the release of Solana’s native Phantom wallet, a Metamask competitor, which has seen over 500k downloads since its release.

So one possibility is Dai is now being stored in Phantom wallets. A second is Huobi’s release of a SOL-USDC pair. Solana now claims to hold over $2bil in native USDC.

Whether DAI was rotated into USDC, or held in Phantom wallets - it’s movement to keep an eye on.

The xDAI chain is holding steady at around 22mil bridged DAI, totaling around a 67% increase over the last three months.

And last but not least - let’s address Rollup szn. Still definitely underway with another 14% increase in Dai circulating on Optimism, as well as over 7mil in Dai bridged to Arbitrum.

For perspective, on August 12th, Optimism only accounted for just over 4mil Dai. Rollups are growing, and fast.

Where is my Dai (General)

This week brings a few changes to the Overview, courtesy of @SebVentures, including the addition of a ‘Bridge’ section, as well as updates to the CeFi category.

We also had a large drop in total Dai held on custodial exchanges which coincided with increases in Dai circulating on DEXs, Lending Protocols, and Bridges.

Where is my Dai (Bridged) 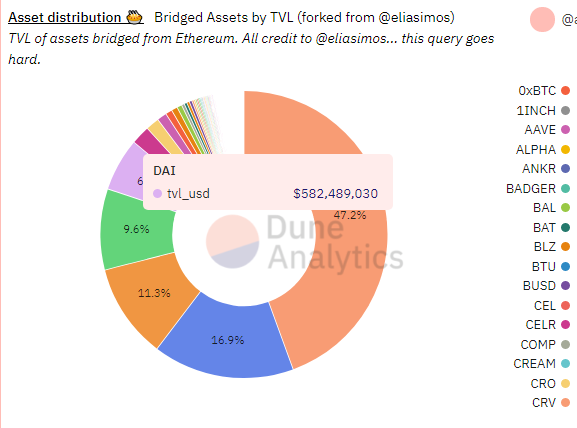 BIG shoutout to @ElProgreso for the find!

Last week saw another crab market, but regardless, Dai keeps on flowing to Avalanche - with another 12 million bridged in the last seven days. This influx comes in the wake of the Avalanche Rush Liquidity Incentives Program.

All other L1’s saw decreases in circulating Dai, though Polygon’s volume has stabilized at around 300mil DAI.

With so much activity happening on-chain, we’ll continue to track Avalanche’s top wallets as the network grows. To start, here’s a brief rundown of Avalanche’s three-chain network:

We’ll be focusing on the C-Chain, where nearly all the network’s current Dapps are housed.

Since its recent price boom, Dai has rotated from platform to platform on the Fantom network. Curve has maintained the top wallet, but second place has been a revolving door.

This week was a great example of this as a combined 34 million Dai exited Curve and SpookySwap. The primary on-chain benefactor is the Scream protocol, seeing a cool ~16mil Dai flood the platform.

On the other hand, Solana saw a massive drop-off of over 11 million Dai or an 81% decrease in week-over-week circulation.

The timing comes after the release of Solana’s native Phantom wallet, a Metamask competitor, which has seen over 500k downloads since its release.

So one possibility is Dai is now being stored in Phantom wallets. A second is Huobi’s release of a SOL-USDC pair. Solana now claims to hold over $2bil in native USDC.

Whether DAI was rotated into USDC, or held in Phantom wallets - it’s movement to keep an eye on. 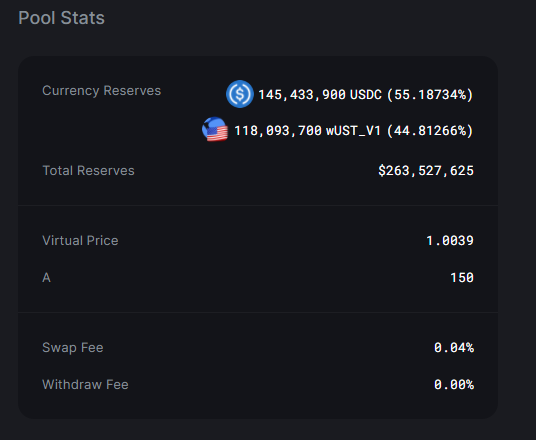 Seeing crazy volume on anything in particular?

Mostly on the Saber App.

We need to find a DefiPulse, or Stablecoin indicator on these chains–hard to keep track on inflows/outflows. You’re doing a great job w/the limit resources – keep it going! Well, it seem if there are announcements on Twitter where you get that information from it means it is an official announcement of the protocol

. But is DAI officially in Solana or is it like in BSC that they added it without asking?

Def some solid alpha - and looks like you called 'em both!

So, looks like the block explorer still needs some fine-tuning… Updated total actually shows a 63% increase in circ DAI, with over 99% held in Saber and Mercurial.

They do have an “official” DAI Wormhole, but most dapps are using USDC and UST as their primary stable pairs.

Hoping Saber and Mercurial are signs of that changing

Hopefully yes, no doubt it is good that DAI is present thanks to the bridges, I am very interested in Solana, I do not know these projects I will read about them, thanks Alec and ElPro for discovering the alpha hehe