We created a sample report on key DAI Supply growth and risk metrics that we find valuable to track on a continuous basis.

The aim of this post is to share these metrics with initial insights, some of them already surfaced over the course of the month from different community members.

Moving forward, for the sake of community alignment, these are not meant as a separate report but rather as a support for the KPI framework presented by @Aes in the Monthly Strategy Review. The community can then decide which are monitored in MSR versus only internally by @Risk-Core-Unit and brought up to the community when valuable insights are surfaced.

Below you can find individual charts with a short summary of insights.

We have seen a strong DAI Supply growth, most of exposure still comes from ETH-A, WBTC-A and ETH-C (92%). 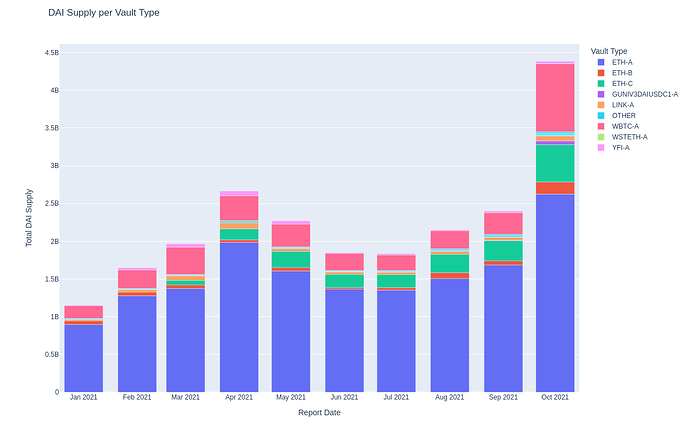 We have seen the largest growth in organic DAI Supply demand for WBTC-A and ETH-B, both doubling in size even after normalized by price trajectory (formula in the report). 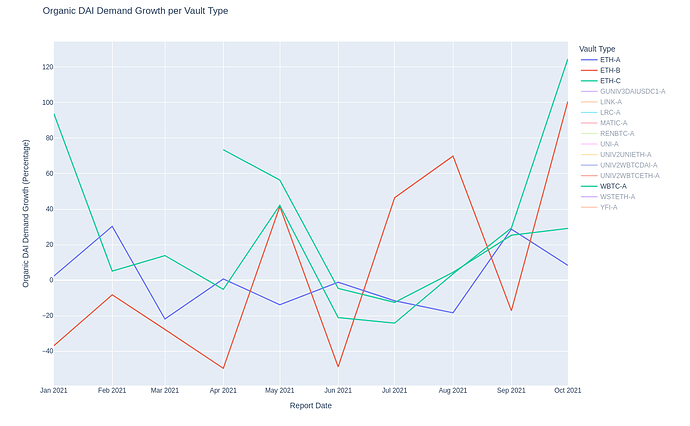 We have seen a large DAI Supply growth from new vaults (730M) yet most of the growth still came from retained vaults. 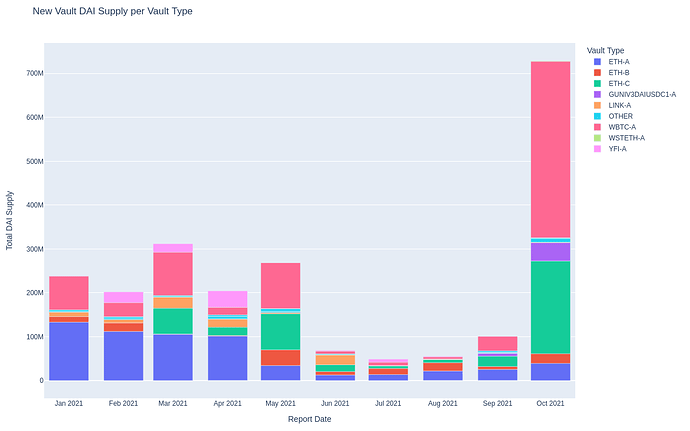 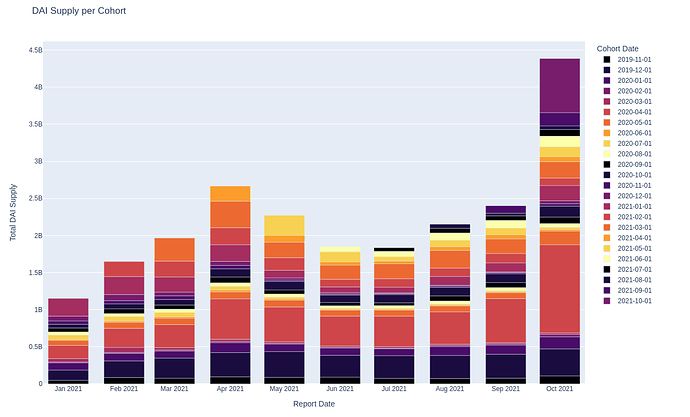 Among the largest vault types, the highest concentration risk comes from ETH-A, WBTC and LINK-A. This is less of an issue with the ETH-B but the value tends to generally increase across the portfolio over time. 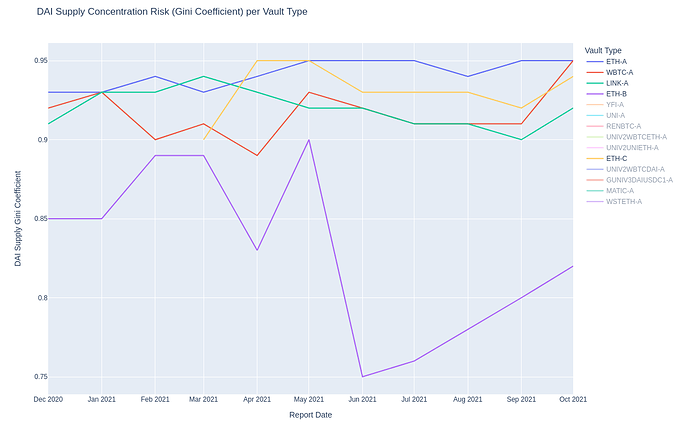 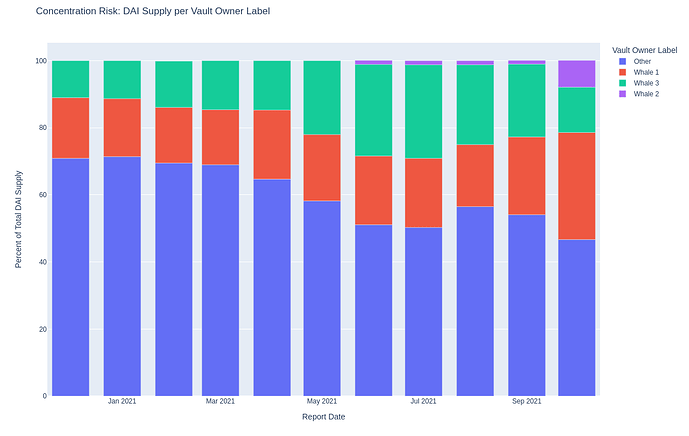 While counterparty risk from Circle (USDC) decreased, it increased from both BitGo (WBTC) and Paxos (USDP). 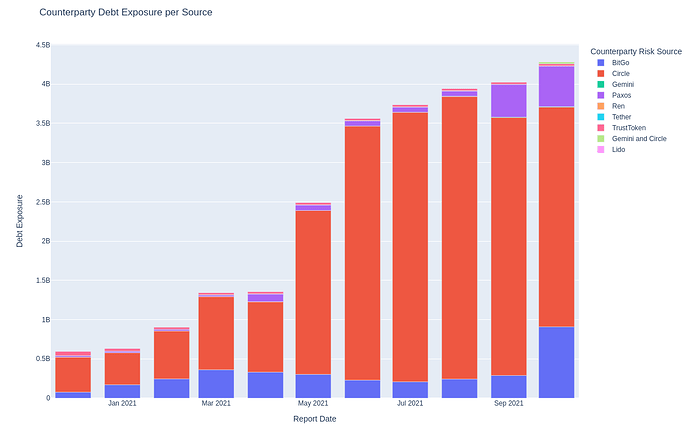 Finally, the metrics from this report will be integrated into our dashboard in the coming weeks for open access to the community.

this is great stuff.

It helps define how Maker is doing and what KPIs should we be tracking/managing to. Ultimately I think Maker should have one summary report that gives a good sense of how Maker is doing. Then one can dig deeper into certain areas/metrics if needed. But it will also help get the community organized/agreed on what really
matters.

I want to think about this more and maybe make some suggestions later.

We added the above report into our dashboard.

When looking at organic demand growth (DAI supply growth normalized by collateral price change), the largest growth came from WBTC-A (52%) and RENBTC-A (24%). This is followed by LINK-A (12.5%) and ETH-C (12%). and ETH-A (10%) This is excluding the large growth in WSTETH-A as it’s new and as such has a low exposure base from last month.

We’ve seen the largest absolute growth in outstanding DAI in ETH-A (almost 50% of total) which is less surfaced in the organic demand growth because of the large existing exposure.

Besides that, October’s cohort has since increased their outstanding DAI from 687M to 801M which is a healthy signal.

When looking at risk metrics, the relative outstanding DAI contribution of whales has increased to 58% of total (from 54% last month).

When splitting concentration risk by vault type and quantifying it with the Gini Coefficient, we notice extremely high values for our largest ilks (0.96 for both WBTC-A and ETH-A).

Both of these concentration risk insights can be both alarming and comforting. It can be alarming because if some of these whales move their funds elsewhere, we can lose a substantial amount of market share. Besides that, in case of a liquidation this would bring a huge load to our auction throughput which could cause a large slippage and/or bad debt.

On the other hand, we noticed that whales are less sensitive to rate changes and based on historical data they protect their vaults better than an average retail user. Also, they are less sensitive to large gas increases during potential market downturns as the spikes have less impact on the cost of protecting their relatively large vault sizes.

Counterparty risk exposure has increased the most for BitGO (via WBTC-A outstanding DAI growth).

Both of these concentration risk insights can be both alarming and comforting. It can be alarming because if some of these whales move their funds elsewhere, we can lose a substantial amount of market share. Besides that, in case of a liquidation this would bring a huge load to our auction throughput which could cause a large slippage and/or bad debt.

Super informative post—thank you J. Question—Primoz recently wrote that whales/institutional players ”can exchange $1bn stETH to ETH by incurring only about 1% slippage right now, while 1% slippage between ETH and DAI is made when selling $75m of ETH” —do you have the numbers for the possibility of a liquidation huge load for keepers to have enough gun powder to liquidate both WBTC-A and ETH-A? Like, can they acquire enough DAI to participate? Hopefully my question was clear enough—if not, sorry about that.