The idea to create a EuroDAI is on the roadmap for a long time. Currently, the € token market is dominated by EURS and sEUR from Synthetix with a $40M market cap for each. There are a Curve pool and Uniswap pairs. Celo is soon launching its cEUR. Things are moving.

A part of the opportunity is that it’s super hard to create a fiat-backed EUR stablecoin as the Eurozone is under negative interest rates.

Being a EUR-based citizen myself, I struggle to keep assets and have lost a fair amount of money last year because of $ depreciation. I don’t think EURS or sEUR are the best solutions.

I can see 4 path to achieve this target:

I will focus on the last one bit please present other solutions or discuss the others.

At a macro level, it would something like the diagram below. Currently, the MKR token holders govern the DAI protocol. We would just add a copy of the DAI Protocol, still governed by MKR The code would be almost the same with the same Oracle system (but EUR feeds). the Surplus Buffer of the EuroDAI protocol would be expressed in EuroDAI and not in DAI. There would be a separated rate proposal group. 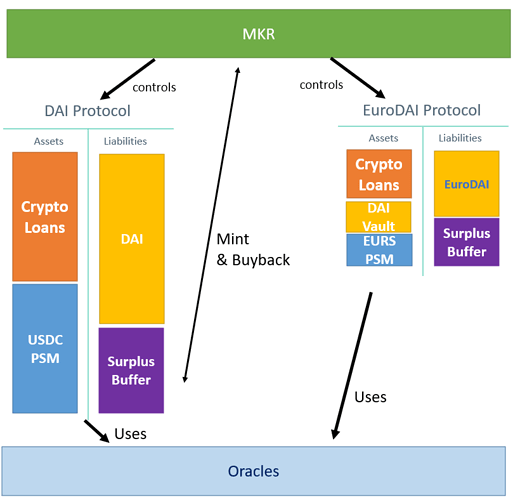 The minor difference is that there would be no flapper or flopper in the EuroDAI system at the beginning (beta phase). This way, the system is obviously a bit more risky but this avoid any negative impact from this system to the rest of the Maker Ecosystem. When more proven, flopper/flapper can be added.

EuroDAI stabilization can be achieved either using a EURS PSM and/or a DAI PSM/Vault.

The advantage of this approach is that it allows a clear separation of work and avoid putting another task to the SC Core Unit. There probably one year of work at best to get the thing running and to achieve a bit of traction. I think this decentralized approach makes sense and allows us to move at the speed of DeFi.

If this discussion leads to something we can move to a declaration of intend.

I would love to hear from @Oracles, @Risk-Core-Unit , and/or @Protocol-Engineering on the feasibility of the PSM implementation since I think it would be the simplest. If it’s a no go from an oracle/risk perspective then I’ll accept that but I just don’t understand the system dynamics/game theory enough to know whether its possible or not.

What collateral ratio are we talking about? Lots of forex exchange platforms allow 100x leverage.

What collateral ratio are we talking about?

As liquidation will have to be enabled at least 110%.

From a user perspective, I need first a ETH-A → DAI vault (with liquidation risks), then DAI → EuroDAI (with another round of liquidation risk). To sleep at night I would need at least 120% CR on the second one so paying 20% SF more on my loan than a $ user.

To be honest, I don’t like a system where the $ is the base currency then other currencies are just pegged, like being inferior currencies. The Bretton Woods system failed exactly 50 years ago (I know there is almost no relationship besides the role of $).

@Joshua_Pritikin how do you add assets backed euro if you don’t have a specific vat?
The all value is here by having more vault.

Oracle should be also much simple as you just need to have a sort of uniswap oracle Eth/USDC * usdc/euro.
Therefore by pushing euro/USDC you should have the oracle for all assets.

I haven’t done the research but I was under the impression that we’re in the current messed up global financial situation because we left the Bretton Woods system.

There would be a separated rate proposal group.

i wonder why this would be needed. I would assume the rates would be more or less the same?

I believe mostly because it is demande related. If you have a high demand you need to put the fees down.
People can move from one to the other and decrease or increase the pressure on the dai or eur.
Most of the time it should remain the same tho.

Is there anyway we can test euroDAI without duplicating the entire protocol first? I’d hate for us to go to all that effort to discover there is like 100M of demand at most.

Personally I would like to see a duplicate protocol, but with minimized governance that leans heavily on the usdDAI protocol.

For example, the euroDAI protocol should probably only have the following vault types:

And they should be implemented in that order (probably.)

Additionally, the main usdDAI protocol should have:

A PSM-like solution where the exchange rate is bound to a price oracle may reduce the amount of arbitrage (edit: fees can also help).

We could also get inspiration from Curve and Mooniswap. For instance we could trade on a curve where at every oracle update, euroDAI:usdDAI liquidity ratio is reset to the €/DAI oracle price (euroDAI liquidity is actually unlimited). Then the price slowly drifts up or down following a chosen curve until the next update. I think in this case where oracle delay is a bug, not a feature.

Just thought of another possibility : update the core system to allow drawing from any vault in both euroDAI and usdDAI. It seems more risky than cloning, and I have most certainly not thought through whether that even makes sense economically

Overall I agree with your proposal. I would even start with only one vault type ETH-A with a very low SF.

If you are short € (which is what issuing EuroDAI means), you need to be long € (holding EURS for instance, or a € loan backed by ETH) in order to be hedged. Otherwise, you take currency risk. It’s like borrowing in € to buy a US house.

Just thought of another possibility : update the core system to allow drawing from any vault in both euroDAI and usdDAI. It seems more risky than cloning, and I have most certainly not thought through whether that even makes sense economically

Exactly my point, pushing DAI to be able to handle multi-currencies is super complex.

Cloning provides a lot of benefits like decentralization, having multiple teams working in parallel, and risk containment. If one system is shut down, the others might be not affected. This might save the day at some point

I might be way off, but wasn’t the plan for synthetic assets supposed to be DAI-backed, and not re-making vaults?

As said above, it seems super capital inefficient, costly, and painful for vault users. But happy to have an explanation on how it should work and why it would be better.

FWIW i would think you start with maybe an ETH:EuroDAI vault + EURS PSM + DAI:EURODAI vault probably in that order.

For example, the euroDAI protocol should probably only have the following vault types:

And they should be implemented in that order (probably.)

I differ from @LongForWisdom opinion here. DAI grew from with starting with just ETH backed vaults as collateral. Would make sense to me that ETH backed vaults would be close to the top of your priority list to give yourself the best chance at success.

I’m not sure that all of the investment would be throwaway work either. For instance, There is probably enough demand for a ETH:EURO oracle it might be worth building in its own right.

Then see what sort market interest there is. If you see some usage you double down on your investment if not then either leave it at that or shut it down.

FWIW i think this probably a great idea. Seems like a real growth opportunity and there are less entrenched incumbents in the EURO stablecoin market.

From a user perspective, I need first a ETH-A → DAI vault (with liquidation risks), then DAI → EuroDAI (with another round of liquidation risk). To sleep at night I would need at least 120% CR on the second one so paying 20% SF more on my loan than a $ user.

I agree starting with a small set of collateral types makes sense. BUT we should encourage LP so boost, euroDAI-DAI at least, maybe even euroDAI-eth

one question i would have on this is how would ES be implemented for EuroDAI?

Could you shutdown EuroDAI seperately? Could it survive DAI ES as a separate entity? Stuff like that.

Thinking do we need to generate euro from Dai … at the end of the day no one will do that. And Dai is a special asset for the vat.

If we have a sort of symmetric vat but not inclusive.
We can reuse the oracle and liquidate in dollars, that will remove two big points.
The flop can sell dai to euro.

RE oracles: maybe worth to consider just to use the existing USD oracles and just apply a USD-EUR oracle on top of it. Surely adds SC work, but would save a lot of gas. We could then onboard all collaterals to euroDai for free.

If that works, it could be a template for any other fiat

one question i would have on this is how would ES be implemented for EuroDAI?

Could you shutdown EuroDAI seperately? Could it survive DAI ES as a separate entity? Stuff like that.

That’s the whole point, no link between usdDAI protocol and eurDAI. Fully decentralized. And until we add a flopper, no impact on MKR tokens neither (except for those triggering the ES I guess).

Even for governance, it can be governed by eurMKR that are owned initially by the MKR Chief (there are reasons we might want to do that, but it’s a detail at this point).