The current Maker governance contract (DsChief) design allows flash-borrowed MKR to be used to vote on proposals. This design led to a flash loan being used to pass the October 23, 2020 executive proposal. A number of short-term mitigations to limit the risk of flash loans in governance have already been introduced in the October 30, 2020 executive:

In the medium-term the goal is to prevent the usage of flash loans in voting, while re-enabling the ability to instantaneously freeze oracles and disable liquidations, as these protections were added initially as defense mechanisms against other threats. This post presents an option for achieving these goals and outlines a transitional process to a new DsChief.

By migrating the system to a new DsChief, voting via a flash loan would be rendered impossible. Once in place, we would safely re-enable the ability of governance to vote on instantaneous oracle freezes and liquidation activation/deactivation. This upgrade is referred to as DsChief 1.2, as this would be the second upgrade to the original DsChief design. Upgrading the DsChief has a number of benefits.

On every call to lock() MKR in the new chief, we would record the current block number, while at the same time ensuring that any corresponding call to free() happens in a different block. The ability to call lock() and free() in the same block is what allows for flash loans to be used with DsChief, by preventing these calls from happening in the same block, we are in turn preventing flash loans from being used with DsChief.

Raises the barrier for governance attacks

By preventing flash loans, governance mitigates governance attacks that require no capital or skin-in-the-game. While this does not prevent all types of governance attacks, it ensures certain economic barriers are in place that significantly increase the difficulty of such attacks.

This fix is easy to understand at only 18 new lines of code in DsChief. The low complexity and lack of new attack surface remove the need for time-consuming audits and increase confidence in this approach.

Governance attacks via flash loans are completely resolved prior to DssGov

Every time engineering teams are randomized onto emergency issues, it delays the rest of their roadmap. This delays collateral onboarding, liquidations 2.0, and the future DssGov upgrade. There are a number of important governance features coming in the future DssGov upgrade, and since flash loan prevention is one of the new features of DssGov, any engineering time spent backporting that solution is duplicate work. Some of the other solutions we explored were mitigations that could still interrupt engineering timelines. Because this solution isn’t just a flash loan risk reduction, as past solutions were, but rather prevents flash loans entirely, we can be assured that engineering, and other, teams won’t be randomized onto other governance flash loan attack vectors.

The governance delay can be safely bypassed as needed

From time-to-time governance may require instant, albeit limited, access to change the Maker Protocol. This is achieved through emergency access modules that can bypass the GSM delay, called Moms. Replacing the Chief preserves maximum flexibility for freezing subsets of oracles or triggering circuit breaker subsets. The existing OsmMom and FlipperMom can be safely reenabled once the Chief is replaced, restoring the full emergency module functionality that had been disabled due to flash loan concerns. Further, this solution allows us to follow the same methodology in the future, creating new Moms as needed.

Upgrading DsChief also comes with a number of concerns

All solutions have some drawbacks. Upgrading DsChief is no exception and comes with the following risk considerations:

Due to the aforementioned activation threshold, there will be a period of time during which governance actions cannot be taken at all (between casting the spell to switch to the new Chief and sufficient MKR migrating to it). Below, the exact sequence of steps is described, and possible risks of the migration (and their mitigations) are considered.

Having spoken to @cmooney a bit about this. We aren’t confident that the migration will be complete in time for a regular executive on the 4th of December.

This means that next weeks executive (20th November), might be the last one where we can make changes until the 11th of December.

Given this is the case we’re going to try to expedite some of the currently active signal requests so that we have a chance to make changes on the 20th. I’ll post on the relevant threads with the details.

I’m also going to speak to @Primoz to coordinate any risk or rates related changes that we may want to poll on next week.

Hey @cmooney I have followed discussions on DSSChief upgrade and have a post with questions on the DSSChief2.0 upgrades. I know you guys have read the whole MKR seasoning idea I proposed to mitigate a lot of these ‘instant’ attacks (flash loan or otherwise).

Greetings Maker community. There is a lot going on and my apologies to add but I wanted to get this idea off my plate for risk-governance consideration as well as community consideration. There has been a lot of discussion about attack vectors in the Maker system. I have in my own analysis identified two primary attack vectors that I outline quickly below. General governance attack via obtaining sufficient MKR. The first line of defense for the MCD here that has been recently enacted is …

Is there some reason why we just don’t make people pay up front by having to hold MKR for some amount of time before it can enter the system to do things? I keep thinking at some point if the system is large enough that the ES becomes an attack vector and from what I can tell all the work on DSSChief may not apply to stopping an ES. I think the proposed code changes are straightforward and I loath to add any time to someone who is working has ass off to keep on top of implementing the vast majority of smart contract changes to answer questions about why this approach (already done for the most part is better than another not done or worse already ruled out for some reason). I am not married to any solutions here I just wondered why what I would consider a simpler approach to nailing the Flash Loan protection using Seasoning at the lock() by rejecting MKR that isn’t seasoned was ruled out - and why we wouldn’t want to force anyone wanting to do anything to have held their MKR for some amount of time before being allowed to do ANYTHING in the system governance or otherwise?

I know @LongForWisdom has remarked that it is better to have MKR doing something be locked in the system so those doing bad things have to take on some MKR pricing risk. I agree with this sentiment, but then I am back to the ES being a wide open attack vector here. 25M or so to lock approximately 2B worth of collateral and cause some market chaos is getting cheaper every day.

Anyway I wanted to thank you for all the hard work on all of this and look forward to seeing the upgrades.

@cmooney is coming on the first half of the community call today to talk about DSChief 1.2

join us at 12pm EST at the event page below: 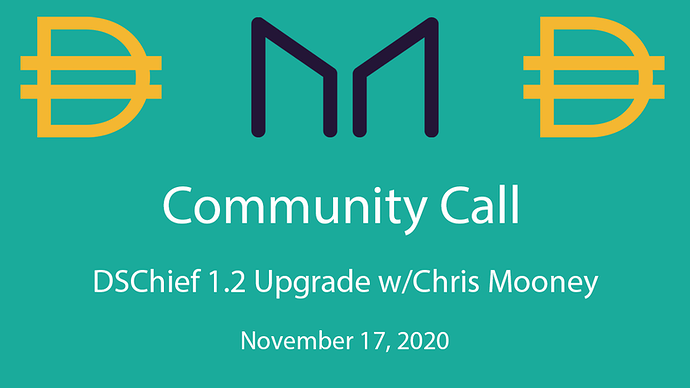 I’m in favor of seasoning in theory, but I am concerned that any implementation might add so much friction it would prevent participation. When I start thinking about how some MKR holders vote today, it’s clear that they pull the MKR off markets to vote on issues they care about. Once those executives pass, they go back to providing liquidity (also a useful and needed function for a healthy Maker Protocol). I’m not convinced that we can thread this needle.

For example, polls are the place where MKR holders can express much more granular preference about what goes in the executive, one would expect this to mean more participation, but instead we see extremely low participation in polls. Why is that?

I’m concerned that the lack of participation in polls comes from the fact that one must have their MKR in the chief or their wallet at the exact moment of the snapshot. DssGov will have a similar snapshot feature, and I am already concerned that this is too much friction.

The real answer is, I don’t think any of us know what seasoning would do to participation. I can see an argument for adding seasoning to DssGov, and then slowly increasing that seasoning amount to see what impact on voting it might have. We don’t have to use seasoning, but it could be an important feature to stop governance/economic attacks in the future.

Dang it I did not know DSSChief was topic for todays CC. WIth work schedule change it would have been hard to participate anyway.

I already put in about 1-1.5hrs on LFWs doc - making my own version until I can settle down the ideas/details on things.

I’m in favor of seasoning in theory, but I am concerned that any implementation might add so much friction it would prevent participation. When I start thinking about how some MKR holders vote today, it’s clear that they pull the MKR off markets to vote on issues they care about. Once those executives pass, they go back to providing liquidity (also a useful and needed function for a healthy Maker Protocol). I’m not convinced that we can thread this needle.

Yeah I totally understand this. I think it is going to be hard as hell to offer incentives for MKR to stay in governance that competed with LP returns. Aligning incentives idea should help. Unfortunately too many people think I want to add MKR as the only reward. I want it ON TOP of DAI as a kind of bonus including people who already are paid by foundation or grants, you included. It is a bonus on top for everyone so all players here have a growing and strong incentive to burn MKR.

What I am surprised about is no-one talking about how burning MKR basically removes MKR from the possible pool to be in governance.

This is a Pre-MIP discussion and poll to gauge interest… I have posted elsewhere the core concepts of this basic idea which is pretty simple. Take some portion of the MKR slated to burn via a flap and use it as an additional reward to align interests of those doing the hard work of Maker with shareholders around improving MKR burn. The mechanics of the idea are straightfoward. Determine some percentage of the MKR flap to set aside in another account via a MIP14_subMKR transfer to an accou…

I generally agree with you barriers to DSSChief can hurt governance but hell I think we are so low in terms of participation we can only go up from here with some careful thought. I also have ideas of some additional governance metrics I want us to have to go with incentives/changes.

BTW: Thanks for the reply @cmooney I know you are busy as crap and once I get some more time plan to hammer down details of concrete ideas regarding incentives to reward MKR to be active in governance. I keep feeling I really need to understand the underlying HAT mechanics to give the best input on DSSChief so I may take some time to digest that with @LongForWisdom before firming up anything concrete. I know our timelines are tight so have this as top priority over anything else here

When I start thinking about how some MKR holders vote today, it’s clear that they pull the MKR off markets to vote on issues they care about. Once those executives pass, they go back to providing liquidity (also a useful and needed function for a healthy Maker Protocol). I’m not convinced that we can thread this needle.