Hello everyone. As most of you are aware, an emergency signal request was posted over the weekend and has resolved in favour of action.

Given this outcome an executive vote will go on-chain on Monday. However, for a number of reasons that are detailed below, the parameters included in the on-chain executive will not directly match those presented in the emergency signal poll.

What will be included?

Why have we made changes?

As someone who was torn between the two options this seems like a reasonable compromise with polling for reduction during the week. I support these changes.

As noted above, my feeling was that governance might not be properly informed about the scale the system might be affected at 101% LR for USDC-A or PAX. It is expected to have heavily increased stablecoin exposure at LR 101%, probably between 150-200m DAI debt minted on USDC and PAX from day one. Furthermore, arbitrage trades could be performed by single a Vault user by using iterative flash loans and collecting huge profits by only spending gas fees. We would then hope that this user repays its loan when DAI < 1.01 (net of fees). If not, Vaults would need to be manually liquidated, hopefully during liquidation 2.0, so Maker doesn’t incur too much slippage and carries potential loss. Note that this is not the main reason for why it was decided to make an executive with 103% LR, but I just wanted to stress this, before a lower LR is proposed to an Executive vote (based on a Monday’s poll).

Also note that my personal preference is to decrease LR slowly and be more aggressive on collateral onboarding with assets such as cUSDC or yyCRV, where we basically achieve similar stablecoin exposure (more other protocol risk though) but Maker could charge much higher SF. We know that USDC-A won’t be collecting much fees at low LR.

We know that it is a good idea to enlist assets such as cUSDC or yyCRV as collateral, but how long will it take? One month is too long, can two weeks?
The current PEG issue is increasingly hindering our development. I found that some users in the market are giving up DAI and choosing USDC instead. If the collateral we choose is beneficial to PEG, we should complete the work as soon as possible.

Awesome. Yes, it is difficult to go back from 101%. 103% CR is still a big move forward for stabilizing the peg, and we still have options on the table to do more action on Friday.

There is absolutely zero chance we can get cUSDC or yyCRV done in a month. Furthermore, on the governance and risk call last week the community seemed to indicate it wanted the domain teams to stop focusing on onboarding regular collateral types but focus on more long-term items like real world assets at the expense of not doing any collateral onboarding for 2-3 months. The community can’t have their cake and eat it too. I understand it’s frustrating. At some point it has to be acknowledged that domain teams have a limited amount of resources and have to strike a balance between short term and long term priorities.

Yeah, that was my understanding also.

When RWA was voted the priority, this also meant bigger short term reliance (and risk) on USDC (and other stablecoins). I am also not thrilled, but there seem to be no other choice. Well, maybe the only other choice is ‘bad’ peg.

Sell 140M DAI will lower the price to 1.01 and not all the generated DAI will used to short. 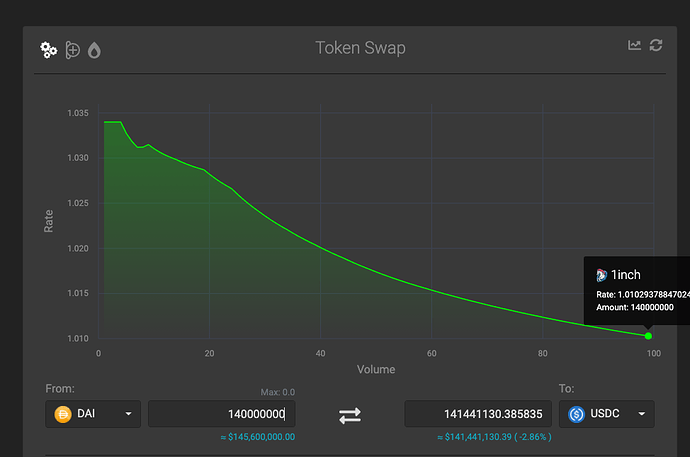 thank you for the explanation. In other words, the PEG tool that can be activated quickly is only LR = 101% (USDC, PAX, TUSD and other stable currencies), while other solutions require a long waiting time.

Increase in ETH price is the optimal solution for DAI stability and at that time the USDC stability fee could be raised really high which will push everyone to close their position.

Worst case scenario if 101% is not reliable for Maker system longer term the governance can setup stability fee really high >100% (making sure USDC-A never be usable again) and release USDC-C after the DAI is in a stable state.

What time will the vote go live?

How long will be it be live?

It’s a continuous approval vote, it’s live until it passes, or until people decide it isn’t going to pass and want to pass something else.

If it goes through, when will be the on-chain implementation?

After it passes, there is a 12 hour delay.

What are the requirements for it to pass? (How many MKRs needed?)

it needs to beat the current proposal which has 107k MKR. Note that much of this MKR will probably swap to the new proposal. So you need ~55k to swap to pass it.

Executives can’t use ranked voting. We had to pick one thing. As described there will also be a ranked on-chain poll with the options 101% - 105%, the results of which could be implemented on Friday.