After liquidating close to 10m debt this Tuesday we got new insight of how robust current Liquidation system 1.2 is and we decided to propose adjusting few parameters. First, let’s take a look at data covering auctions this Tuesday, 23th February. 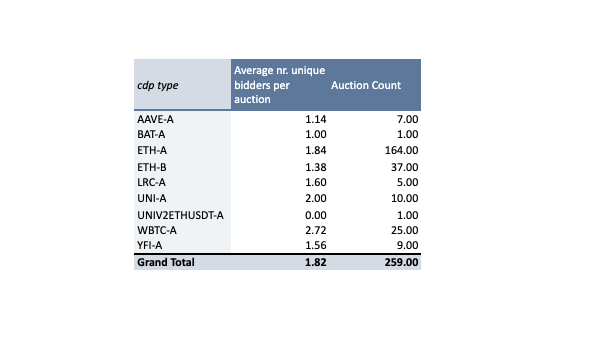 Current bid duration (ttl) and auctions length (tau) are set to 6 hours and the main reason to have them so long is to increase keeper participation and avoid 0 bid scenarios. However, 6 hour auction duration is quite long and most of the competitive bidding happens at the end of auction anyway. The data confirms that close to 50% of auctions did get bids to cover debt amounts and liquidation penalties in the first hour of auction duration, apart from ETH-B where a lot of keepers didn’t bid in DENT phase because of lower liquidation ratio. Still, most “healthy” bids come in the first hour or so.

If we can shorten ttl and tau this would increase daily capacity of liquidations. Currently the box is set to 15m and tau to 6 hours which represents 60m daily auction capacity. If we shorten both ttl and tau to 4 hours we can increase this capacity to 90m if box is kept the same. This should be also beneficial to increasing keeper participation, since proposed shorter duration makes auction bidding slightly more predictable. We may however not want to shorten duration significantly more, since there is still only between one to two keepers bidding per auction and we may want to have more time to react (make people bid through auctions UIs) if some of keepers don’t show up due to various reasons.

@lix made this great analysis of how well capitalized keepers currently are. Despite finding 118m of capital in wallets and associated addresses of bidders, a lot of this capital is illiquid or in non-stablecoin form. One other Interesting and promising finding was that a lot of bids came from DeFi Saver auctions UI.

As @lix suggested and what we also believe is that 30m box should probably work in terms of keepers capital. But when looking at how lowly competitive bids currently are at times (particularly for ETH-B) and knowing that higher box will only decrease competitiveness, we suggest only a modest increase of box to 20m. Together with decreased tau and ttl to 4 hours, this would increase daily liquidation capacity from current 60m to 120m which is an improvement.

We already recommended increasing beg for UNI LP vaults where keeper participation is extremely low. Higher beg should attract more keepers generally. Downside of higher beg leads to potentially worse outcome for vaults, but not in cases where keeper participation is already low and vaults already lose most of overcollateral (ETH-B case). This is why we propose to increase beg to 5% also for ETH-B. It seems the community didn’t support increasing it in the latest signal, but I hope it gets reconsidered after looking at this data of worse ETH-B auction efficiency.

FLIP adjustments for all vault types

We believe we should include these changes into the on-chain poll already next week.

As already mentioned above, there is one other issue which can not get simply solved by adjusting auction parameters. Auctions are getting kicked very late for vaults that are undercollateralized. This is because one kick event may cost up to $300 in gas prices and the first bid doesn’t carry any advantage when auction duration is set to hours. Kicking potential 500 auctions until box gets filled could cost up to $150.000 in ETH (20m divided by avg. lot size of 40k DAI times $300 gas cost).

We may want to think about how this could be mitigated. One idea that floated around was to deliver funds from the surplus buffer to one or few actors so he or she would kick all auctions in time.