Thanks to those that came for our presentation at the LEXMKR call on 9 June 2021 and thanks to @amyjung and @juan for helping set it up!

The recording is available at this link:
https://forum.makerdao.com/t/lexmaker-1-i-dai-foundation-maker-ip/8528/4

You can see the accompanying slides here:
https://docs.google.com/presentation/d/1FLlWOeueyyCJ_b7eorLWj-ruRKtQobagwpmGxFyypNM/edit?usp=sharing

With this post we are following up on a couple of things from the call.

The Trust Deed for Dai Foundation that lays out its mandate can be found here: 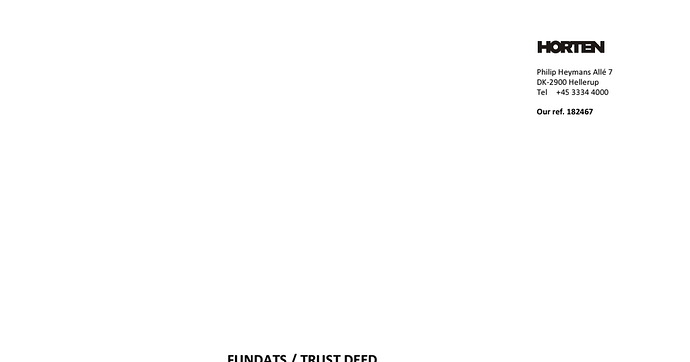 Trademark Policy
The first tangible deliverable from Dai Foundation in safeguarding is the Trademark Policy which can be found here:
https://docs.google.com/document/d/1bk7Tyq_Owss0tBOzX_6BhA3fwenUe6wxYKSxO1JcLwY/edit?usp=sharing

The aim of this policy is to make the trademarks available for anyone who builds, integrates with and supports the Maker Protocol without unnecessary hindrances while still maintaining the ability to protect against malicious use.

We have consulted the policy with a number of people from the community but we are very open for suggestions and questions from you all.

Let’s use this forum for all kinds of questions and suggestions that you have for the Dai Foundation. The board will try to be here regularly.

If you rather want to reach out to a specific board member, you can reach the following board members via email:

We do hope there will be a good dialogue so there can be broad clarity on the purpose and mandate of the Dai Foundation.

/The Dai Foundation board

What happens if someone (in good faith, presumably) uses IP in an advertisement or sponsorship that is potentially controversial?

Examples may include a DAO member sponsoring a controversial athlete, charity, politician, or business.

This is probably an edge case, but if someone drops some cash to put the DAI or Maker logo on an event/organization with the potential to alienate users/partners, is that allowed? Should it be allowed if it is?

It’s a bit of an edge case, but we’re a DAO and you never know what folks may do in a decentralized manner to market Maker

Fully agreed. I am sure that we are going to see many such edge cases in practice. It’s just a matter of time. Personally I would much welcome community discussion on such cases and interpretation of rules.

At least in some cases similar to what you are describing Rule 7 would apply:

You do not use the Trademarks in a way that incorrectly implies affiliation with, or sponsorship, authorization, endorsement, or approval by the Dai Foundation or Maker Governance of your products or services.

Reading the Trust Deed, it seems that the DAI Foundation has quite significant leverage on what MKR holders can do and decide. The scope of the Foundation is actually quite wide.

Institutional Vaults for instance (or RWA) seems to go against the accessible nature of the Protocol. Increasing dust as well. Not to mention the “banking the unbanked” part. 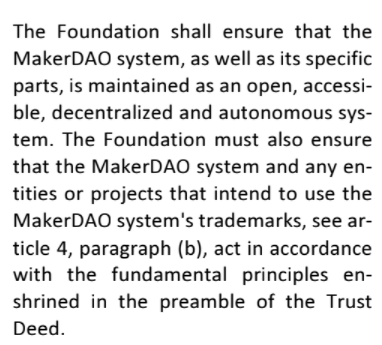 That’s an interesting idea. One of the primary concerns and reasons for establishing the Dai Foundation was a governance attack / fork scenario. For that reason hardcoding the DAO (which may include a malicious attacker) as a final authority into the policy might be wrong.

That said, I think that it might be both useful and possible to do that in some form. If you have an idea how to implement this in practice that would be great.

But WHO decides what or who is controversial? And from what country are we judging? I know controversial folks in the United States. But I have no idea who the controversial characters of Australia are (as an example). I believe the Maker Community should decide this topic, not the DAI Foundation IMO.

By the way, why no women on the board of the DAI Foundation? @jacek

the Maker Community should decide this topic

We are committed to work with the community and Maker Governance on what the principles and content of the Trademark Policy shall be and how the trademark policy shall be upheld. Our goal is to be aligned.

However, in the end a trademark cannot be decentralised - there has to be an entity to safeguard it.

Can you elaborate a bit from an operational standpoint on what you mean when you say:
“the Maker Community should decide this topic” ?

Regarding the board members we want to offer Maker Governance to appoint two board members and we welcome any qualified candidates irrespective of their sex.

Can you elaborate a bit from an operational standpoint on what you mean when you say:
“the Maker Community should decide this topic” ?

Deciding on what “Topic” is controversial. To an American certain things can be controversial, as oppose to Norwegians, Uruguayans, and Pakistanis. We all have different views as to what is controversial and what is not. Hence, the Maker Community will posses better judgement IMO–since there’s more diversification within the community.

Before anything else though: how much can the Foundation tie its own hands? Say suppose they do the opposite of their policy, can anyone anywhere sue them?

If the Foundation is in fact free to do whatever it wants with the IP no matter what the stated policy says, one can simply say something to the tune of “the Foundation will follow the result of governance polls on IP-related issues, except if deems that there is an ongoing governance legitimacy issue. In that case it will use its best judgment in order to safeguard Dai and Maker-related IP.”

Otherwise that’s a much thornier problem. Maybe the Foundation could only have a choice between following governance polls (normal course of operations) and pushing the self-destruct button (in the event of a hostile governance takeover). Or appealing to a higher authority e.g. a pre-selected arbiter.

Is the Dai Foundation going through Maker governance or not?

I think the answer is that if the Dai Foundation goes outside its narrow mandate, the Danish government, which specifically has to both review and approve the non-profit’s charter and periodically audit the entity, would pull its charter. If the Dai Foundation’s charter is pulled, that likely spells not only the end of the DF but also trouble with the Danish government for those who permitted the DF to go astray, that is, the current board members, several of whom are Danish citizens residing in Denmark (i.e., they have no where to hide).

Question? Would someone like “saveDAI” need permission from the DAI Foundation to use “DAI” in their App Name?

Overview saveDAI is an easy way to open an insured, high-interest savings account, full stop. saveDAI is the first self-insured asset (that we know of). It generates interest (via Compound) and is also protected from financial, governance, and...

If you cannot answer Yes to all the following bullet statements, you have to ask for permission:

When I read the description of the App I see it takes Dai and generates savings for the user, so for me there isn’t anything that immediately indicates a need for explicit permission from Dai Foundation, but I am open to have that assumption challenged

When I read the description of the App I see it takes Dai and generates savings for the user, so for me there isn’t anything that immediately indicates a need for explicit permission from Dai Foundation

Looks like this announcement (who claims to have written the original white-paper for MakerDAO) is on a publication that calls itself Dialectic with an interesting Logo: 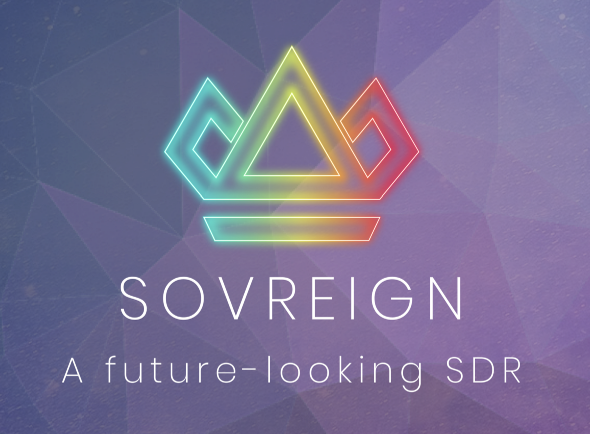 EDIT: or maybe Dialectic has been around for years and y’all are ok with the name, not sure

Hi @ElProgreso
Writing the original MakerDAO white-paper was afaik a collaborative effort. I believe several people rightfully can claim “When we wrote the original MakerDAO white-paper”.
Regarding the name “Dialectic” I don’t think it can be confused with “Dai”.
From an asset protection point of view I don’t think there is much Dai Foundation can or should do in this case.

So, I’ve finally managed to catch up on the recording. I’m not sure that I have any specific comments regarding trademarks, that seems to be well in hand.

I would also like to get a list of all the board members forum accounts so that I can create a ‘DAI Foundation’ forum group, so that it’s easier for the community to identify you and draw your attention to relevant threads.

My main concerns are around how the DAI Foundation would respond in the event of a non-malicious protocol fork, as raised by @Kurt_Barry in the call. I’m aware that this is an area you are actively working in, which is great, but I’m worried about how this situation would interact with the funding of the DAI Foundation.

Basically, if the DAI Foundation is funded by Maker Governance, that means that there are going to be conflicts of interest in the event of a non-malicious protocol fork. In that situation both sides are going to want to retain use of the trademarks, and one or both may not be able to afford to fund the DAI Foundation.

Naturally this shouldn’t have a bearing on which ‘side’ ends up with access to the trademarks - but it may well do if the ‘correct’ side (assuming there is one) may not be the side with the ability to fund the DAI Foundation.

All of this is very edge-casey, but I think it would be good if the DAI Foundation considered denying both sides of any fork use of the trademarks until it becomes clear which is more in line with the DAI Foundation’s principles, especially if it is unclear which fork is the ‘majority’ fork. Not only will this avoid swift decisions made with potentially incomplete information, but it should also serve as a deterrent against forking the protocol at all.

Already even, I believe one of the principles is something along the lines of serving the financial needs of the underserved.

Well, we’ve raised the dust limit to the point where it’s not entirely clear whether we’re still sticking to that principle, even if we want to. What would constitute a breach of these principles and how would the DAI Foundation react to such a breach if it represented the will of Maker Governance?

Apologies for the delay in responding to your thoughtful comments here.

Here is the list of all the board members forum accounts:

You point out great questions and dilemmas where I readily acknowledge that we don’t have all the answers yet. We certainly want to engage with the community in discussing various edge cases and formulating principles for how to approach various forks that Maker Governance can approve.
We will adjust the DAIF Core Unit MIP to make this important activity more explicit. The commitment of the DAIF Core Unit will be that we will work with the community to understand and find answers to the questions you raise to the largest degree possible.