I’ve aggregated recent RocketChat comments with the aim of promoting discussion to clarify how we will shutdown SCD. I’ve referred to the action of shutting down SCD as Global Settlement because it is a planned process with a date and defined parameters that need to be collectively agreed and voted upon.

For this process to be complete, we can think of the SAI debt ceiling as essentially being reduced to zero. However, before this occurs there are some nuances that need to be defined, including:

Context: Mechanics
The Stability Fee for SCD accrues throughout the life of a CDP and is paid at the end when a user repays their Sai. This is done in MKR. With the current system parameters, if Emergency Shutdown were to occur, users who incurred debt through the Stability Fee and did not migrate to MCD would avoid paying the Fee. Alternatively, there is a Tax parameter that Governance can introduce through a vote to account for this. The fee would be applied to CDPs that remain open in order to prompt their closure and/or migration to MCD.

Brief summary of community feedback & viewpoints (2 sides to a coin):

In this scenario, tax would ideally be set at a suitably high enough level with enough advance warning in order to account for the stability fees that would otherwise have been paid (Discussion remains open for how this would be applied across CDPs of various size).

B) Have a 3rd Party supply enough liquidity to support closing out large CDPs before implementing the above solution, along the lines of:

Looking forward to ideas and feedback as to how best we should implement Global Settlement. Thanks!

My question that someone brought up is, what are the actual mechanics of the tax function? It was mentioned that PETH holders (aka CDP holders) benefit from the tax? So how would this actually penalize holdouts? If it doesn’t work like that, please educate. Thanks!

Great summary btw, I like options A) and B) but could also see C) potentially working since CDPs would eventually want access to their collateral anyways so by just leaving the system open and managing the debt ceiling could work as well.

There is a cognitive overhead to support two systems. There may also be a risk of arbitrage between the two.

Upgrades are painful, but I think this (quoted) is a real cost that should not be minimized. I encourage reasonably prompt global settlement for SCD.

I have advocated the following but it appears there are no mechanics to support this.

Given I don’t think there is any mechanics for accruing fees on individual CDPS and then closing them when they hit liquidation limits I am having a hard time figuring out what actual stick (punishment) that could be applied.

I am also an equal benefit or punishment for all since this generally encourages the correct behavior. As a positive reinforcement animal trainer I understand the benefits of using rewards to elicit good behavior vs. punishments for bad behavior.

I simply can’t wrap my head about the mechanics here of how/whether to reward (because this means people who closed early were punished and really should have been rewarded) or to punish as time passes.

What are the actual tools we have?

DAI/SAI 1:1 bridge (this could be adjusted)
I still have not seen even the remotest proposal regarding providing liquidity to CDP owners to close, while I know for a fact (myself included) that people are holding some SAI as a lein on ETH collateral. I just don’t see who could provide this liquidity and what it would cost in the end.

Generally if my points 1/2 above could be implemented (in the MCD/DAI system I think they could) one would just simply reduce the DSR to 0, and up the MCD-SFs to basically either force normal closure or ultimately liquidation and to leave the system open until it concludes. Why? Because in my scenario I wanted to just apply a steadily increasing SCD-SF fee (say .5%/month) and reduce the SCD-DC say $1M/month. Once the number of CDPs open or the amount was less than 10% of the new system outstanding debt and the remaining holders hadn’t touched their CDPs (say in like 3 years) just close it down. Realize the longer these things are open and the higher the SF rate goes the more interest is effectly collected. In effect it is closure by chinese SF rate torture and liquidation stick.

This is the approach I would have like to seen taken with the SCD/SAI but I was told there was no real mechanics for this. I think the above approach would be valid for the MCD/DAI.

The only lagging issue is the liquidity one and to date I have not actually seen a working proposal for that. Though our suggestion to create a Maker treasury that has DAI in it could be potentially used as an interim liquidity solution for a MCD/DAI shutdown (expected or not).

This is a key point I want to make here. Any transition from an old Maker system to a new one should really have ‘preplanned’ how this system gracefully encourages its participants to migrate.

Great post. You are correct in your assumption that this would work in shutting down MCD. Because fees accrue continually in MCD this is possible. Unfortunately in SCD there are no auction mechanics and instead uses the PETH mechanic so it is not possible to force liquidation.

This is where we’ve been told the tax function could instead be used. I’m beginning to feel like this function is the only one that will effectively force cdps to migrate via “stick”.

Unfortunately I don’t know the nuances of how the mechanic interfaces with the system so am unable to theorize the game theory required to make an educated decision. We’ll need someone from the foundation to explain and perhaps come up with a proposal for how this would logistically work.

Thank you for the great questions and contributions. I’ve tried to add further notes to answer where I can. Note, we still need to review all of this with the risk team for a more comprehensive analysis, please do not consider this in anyway definitive - let’s chat on tomorrow’s Governance call!

Consideration - how long should the timeframe for Tax be?

If we were to set the Tax for only a few hours before global settlement, it is possible that users would not see the impact until the system is shutdown. We should be as transparent as possible, would it therefore be preferable for them to see the tax over a period of a few days, possibly 2-4days?

Determining a fair value of Tax:

Is the MKR Community willing to forgive a percentage of accrued debt in good spirit or will the penalty be slightly more. As MakerMan says, this is the tricky carrot/stick dilemma, and from recent chats/posts is still an open conversation.

Thoughts…From the perspective of the protocol:

Optimal user behaviour: would be if the user closes out their CDP and pays the Stability Fee only. This is optimal because it is covering the cost incurred for generating Sai.

Alternatively, looking at this from the user’s perspective , we would not expect users to migrate once they reach the Stability Fee and Tax phase (sub-optimal phase) because it would be favourable to hold out until Global Settlement to avoid the Stability Fee - unless the user gets liquidated.

Similarly, those who hold out to Global Settlement will have incurred a significantly large Tax accrual - of which the precise tax value applied needs to be discussed, but again, may likely exceed their original Stability Fee as this is a value that needs to be uniformly applied to all CDPs.

Additional Solution with more detail:
Applying the above information and your comments, let me create an example. Let’s say that, as per the poll, we want to give CDP holders 6months to migrate, and let’s assume 4 days of elevated rates to cover the Stability Fee Cost incurred. 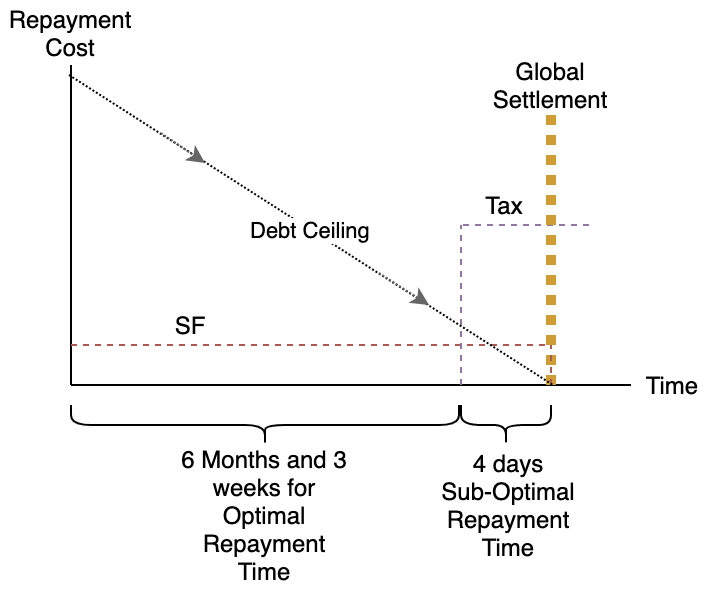 Screenshot 2020-01-15 at 19.22.22708×598 14.7 KB
*Note; This is a very rough illustration of the concept, we will need to map this out with the risk team. I am adding it here as a means to share my understanding, not as anything that the foundation is formally proposing - that comes now with discussion, community polls and voting

That was a bit longer than intended, thanks for viewing.

This is pretty much exactly what I was thinking. Great illustrative post. My only question is, aren’t CDPs PETH holders? So wouldn’t their taxes get redistributed to their PETH? Or does the PETH get turned into ETH to recapitalize their debt, thus diluting the PETH pool?

Yes to your first question - Sai accumulated through tax is sold for PETH which is then burnt. This means that there is more ETH deposited in relation to the amount of PETH in existence.

So ultimately who benefits from this?

Edit: I think I understand. So the PETH would be burned which would make PETH more scarce raising its ratio value versus ETH causing the collateral that each CDP could withdraw go down, so in turn on global shutdown CDP holders would have less ETH to withdraw. Is this correct? What happens to the extra ETH?

My understanding is that very likely mostly MKR holders since CDP owners will realize we are not bluffing and will choose to migrate. Less value goes to informed ether owners who will add/convert ether to Sai system before Sub-Optimal Repayment Time.

When SCD is settled what will happen to sai in uniswap, oasis etc?

It’ll stay there until the owner of the sai trades it in for equivalent ETH$ at shutdown time.

CDP Holders (as they are also PETH holders) will benefit from it but as there are also free PETH holders, the earning will be shared not only to CDP Holders. Then the benefit you receive as a PETH holder is less than what you lose as a CDP holder.
Apart from what tax provokes incrementing the debt, it can also make that certain CDPs are liquidated also suffering the Liquidation Penalty. This again benefits to all PETH holders (CDP holders and free PETH holders).

So what you’re saying is… BUY PETH NOW!!!

lol
Well being a PETH holder has the risk of PETH inflation.
Also after global settlement PETH/ETH ratio decreases a lot as a big ETH chunk is separated to pay the SAI holders. PETH/ETH ratio gets back to a normal value after several remaining CDPs are liquidated, action that can be done by anyone after shutdown (but which will cost a lot of gas to do a complete clean up), so might take some time until you can change your PETH to ETH back with a certain decent rate.

Regarding Tax, each time drip is called, it calculates the time that has passed between the previous drip and increases the debt of a CDP reducing its ratio of collateralization.

I am little confused here. Does this mean that tax actually takes out sai for the user? Like how would debt increase (and be represented) without actually minting SAI?

Hi @Mitote, you are correct, when drip is called, it acts as a mechanism for tax to take out additional Sai against the user’s collateral. This is why you would see the user’s collateralization ratio change. (You could think of it in the same way as the Stability fee calculation, which is also calculated in each drip).