Hello! This post is somewhat overdue, but after a couple of quarters of operation, GovAlpha is ready to return our unused DAI budget. This post is to document that return after collaborating with Protocol Engineering. I believe this should serve as a useful precedent for other Core Units that find themselves in this position.

We strive to make our expenditures as transparent as possible for the community and a running public expenditures spreadsheet can be found here. We plan to continue to cooperate with @Aes and the RWF CU in their quest for more accessible accounting, and are happy to change up our process if it can lead to increased clarity and transparency.

Overall we are returning 218,059.10 DAI to the Pause Proxy contract, intending to have PE convert the ERC-20 DAI during a future executive so it can be returned to the Surplus Buffer. This section will show where those funds are coming from, as well as document the intention of the funds that remain in the GovAlpha Multi-Sig. 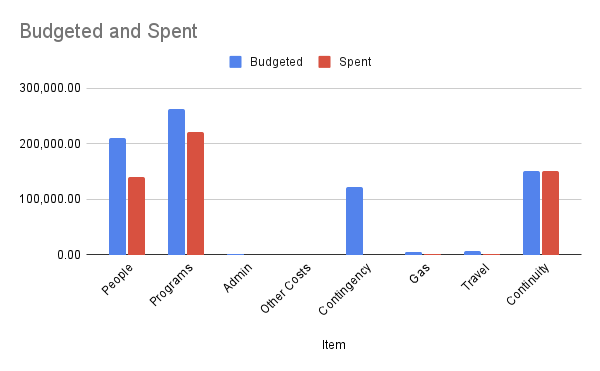 Table 2 - Funds Not Being Returned

As indicated above, the primary over-budgeting came from an inaccurate prediction of Core Unit Salaries. At GovAlpha, contributors outside of the Facilitators are paid hourly, so there is some variance in the actual salary expenditure. This, combined with the inexperience of @LongForWisdom and myself in running a Core Unit budget, caused us to drastically overestimate how many paid hours we would be utilizing at GovAlpha. Moreover, the short turnaround (having to submit our second quarterly budget just one month into operations as a CU) caused us to keep the salary figures about the same for the second budget period.

Also worth noting is the over-budgeting on Travel expenditure. This is mainly due to the delay in renewing a passport for myself and the pseudononymous identity of many of our contributors. It is possible that the travel portion of the budget will decrease in the future, but for now, the allocation seems reasonable.

The other notable reason we have spent far less than anticipated is the delay of several projects. Most notable in our retained funds category is the funding for the SourceCred Onchain Technical Design. We have not completed the expenditures for this project due to a combination of an aggressive project timeline and an inability to get code audited. I am hopeful that @Protocol-Egineering will get a chance to review the initial deliverable soon, which will allow the rest of the project to continue.

Budget Control is an important part of the DAO, particularly in regards to honoring Governance intent. The Core Unit model is still fairly young, and while we expect all participants to get better at estimating costs as time goes on, a number of the initial Core Units have unused Budget Allocations.

With the addition of DssVest, the returning of excess funds is perhaps less urgent than before as the funds can sit in the Surplus Buffer until climbed. However, as a method of account, it is very important to clear these allocations properly and worth noting that some Core Units are not using the DssVest streams. For this reason, regular budget reports and upkeep are essential.

While it is certainly up to the Core Units to determine their most efficient internal systems for accounting and budgeting, it seems reasonable that after a budget period (ie a length of time for which funding is requested under MIP40) has ended there should be some obligation for the Core Units to both reports how their funds were used and return unallocated/unneeded funds to the DAO.

This process is perhaps MIP-worthy itself, but until such a time that a formal procedure is proposed, GovAlpha will assist with coordination between the Core Units and Protocol Engineering so Executive Spells can efficiently combine ERC-20 DAI returns. For now, if you are a Core Unit Facilitator and aware of a budget excess, please let me know so we can collaborate on the return of the funds.

A more comprehensive breakdown of how well GovAlpha did this past quarter will be made available in our Quarterly Report. In general, we are confident our most recent budget will be far closer to our actual expenditures. While it’s generally better to be under budget than over, we recognize that these funds could have been put to better use, or more generally just been there to defend the protocol in the Surplus Buffer.

Having an accurate budget greatly increases efficiency for the DAO and we believe generating this report and encouraging other Core Units to review their accounting will have a positive impact on the community.

Transaction has been confirmed and can be viewed here. We will be talking to other Core Units and seeing if anyone else plans to return funds shorty as well, in an attempt to batch the necessary housekeeping actions for Protocol Engineering to return the funds to the surplus buffer.

Really nice to see this type of transparency. In my own analysis I believe it would be prudent for CUs to build up DAI reserves for times where the system isn’t making that much DAI. There are pros and cons to this type of budget management.

I had a crazy idea that the extra funds (say for at least 1 year worth of expense) run could actually be a kind of Surplus reserve budget that CUs could invest (conservatively). But these are whole other discussions to be made.

I am just glad to see GovAlpha leading the budget transparency efforts.