I know of a high-quality RWA. It is called indexed universal life (IUL) insurance. It can do 150% tax-free returns in a year. And no risk of losing principal.

I know of a high-quality RWA. It is called indexed universal life (IUL) insurance. It can do 180% tax-free returns in a year. And no risk of losing principal.

I wouldn’t say no risk of losing principal – it depends upon the financial strength of your insurer and whether there are funds set aside by their governing jurisdiction to make whole policies that cannot be paid out by the insurer.

It’s also not tax free in the US, I believe. It’s simply tax deferred. Just like appreciation of owning shares in an index that the insurance is based upon. Which of course is not without benefit, though!

Perhaps this isn’t the right place to ask this question, but are there any key persons that Maker needs to find a way to have life insurance on? A bit off topic, but it seems relevant.

Mutual insurers are fully collateralized and pay a premium to be reinsured by state jurisdictions to avoid any kind of AIG bailout. It grows tax-deferred like a Roth IRA (i.e. post-tax income). Of course nothing is absolutely risk-free, I just meant it relative to the alternatives.

Well, reinsurers can (and have) run into trouble before as well. Insurance is just a thing where you have to keep an eye on your counterparty, which may or may not be onerous. As an aside, Roth IRAs are tax free. It’s one of the few things besides insurance where you can put in post-tax dollars and receive tax-free benefits in the United States.

Also, I’m unclear how Maker could use insurance as an investment vehicle. Not to say it can’t be done, but you don’t want a surprise ruling from the IRS or other tax authority that says this wasn’t ever actually functioning as insurance. It’s a gray area, but you have to argue that it’s actually being used at least mostly for insurance and not just as a tax shelter.

I think for RWA, some form of call-like contracts being constantly sold towards the assets being collateralized may be a good option if there are interested counterpartys. If the collateral appreciates, there are unlikely to be a lot of liquidations with it, and if it depreciates, causing issues for DAI, the call-like contracts would be worthless and the funds could be used to intervene without needing to mint more MKR.

In this instance Pacific Life has to pay the California Department of Insurance premiums to guarantee the insured are covered 100%. For both of them to fail completely would be tantamount to Chase and the FDIC collapsing and failing to make depositors whole.

My idea is to tokenize the insurance contract into an NFT similar to what Centrifuge is currently doing and creating risk tranches of senior secured bonds and junior equity. It has been used as a tax shelter for decades and is not going away. On the contrary, they just made it more lucrative for high cash value insurance policies to have a lower death benefit to qualify as a contract for insurance. A Small Tax Change Is a Boon for Permanent Life Insurance | Morningstar

Also the insurance industry has one of the most well-funded and highly influential lobbyist in Congress…so it is unlikely to have a negative surprise to its tax treatment.

Ah. I see now what you were saying. Are there any projects far along with tokenizing this kind of thing? Insurance and annuities seem like things that would benefit from the liquidity of DAI without having to sell it at cut-rate prices to access cash quickly (see those famous J.G. Wentworth ads, if you’re in a market where those come on TV).

It’s also exactly the kind of collateral that would be good to have since by what I’ve seen, DAI is literally the least-correlated major crypto asset with regards to Ethereum. I don’t think Ethereum will crash any time soon, but if it crashed, pretty much all the other collateral would as well. So more diversification via what you’re saying would be wonderful.

It is the preferred form of Tier 1 capital in most banks. It is a ballast against a crashing real estate, bond, or stock market. Also, it is the perfect vehicle for people to mitigate the risks of market volatility, inflation, sequence of return, withdrawal rate, chronic illness, longevity, and taxes. This would be a win-win scenario and it could garner lots of attention in the mainstream media if MakerDAO all of a sudden started growing AUM by billions using tokenized life insurance to give people a line of credit that is not able to be liquidated since it is consistently growing and cannot fall in value. Banks are actively trying to get this kind of collateral on their balance sheet and offer very favorable terms like 90% loan to value and WSJ Prime Rate. https://partners4prosperity.com/wp-content/uploads/2018/05/collateral-state-bank.pdf 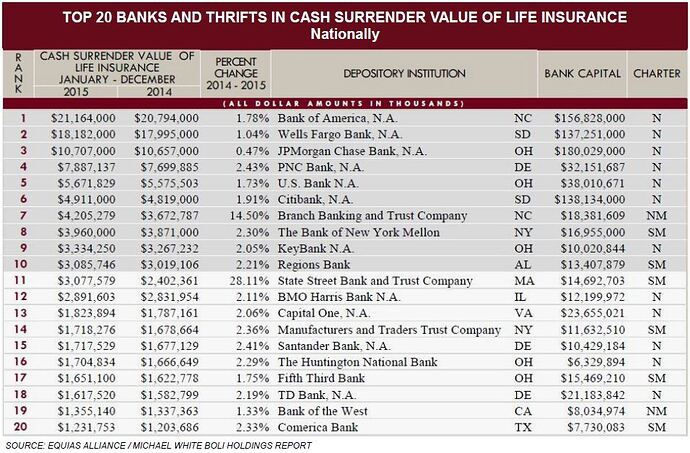 Feels like this was a little off-topic in the other thread. I’ve moved it to a fresh one

Thanks for submitting this, I think the insurance space is very under-explored. I have a couple of questions:

(1) Are you suggesting that Maker attempt to purchase (lend against) already existing policies that have been written to individuals?

(2) If so, where would we source these policies? I assume they are quite scarce and inconsistent in terms of deal flow.

If my above to points are heading in the right direction, I’d like to reiterate a point I’ve been making for a while: Maker should be the “lender’s lender” and originate loans to the originators themselves. So in an ideal world, Maker could provide a RLOC to an existing loan originator that specializes in IUL. This will allow for a high level of diversification, extra safety due to “double equity” in each deal, and a consistent deal flow that doesn’t strain our own resources.

(2) If so, where would we source these policies? I assume they are quite scarce and inconsistent in terms of deal flow.

Noting that I have done zero due diligence on any of them, the first movers in this space include:

-Etherisc with their DIP token.

-FidentiaX which is an exchange.

-I’ve heard but cannot confirm Lemonade is also working on something to tokenize insurance.

I’d be hesitant for Maker to get directly involved in such a huge undertaking without someone interested in heading this up. Just trying to figure out the actuarial assumptions would likely be hard to do. Better to work with tokens created elsewhere if they exist.

No I was not suggesting directly going to the consumer. I was referring to a kind of structure like Centrifuge has with a loan originator, for instance, an insurance captive like CrescoFin is going to establish. I have contacted Robert Sharret the founder on discord and he too is interested in long-duration risk-free rates of return in order to build a DeFi yield curve. If someone like that with all of the infrastructure built and regulation above board launches such a platform, then MakerDAO could act as the source of funding either directly or through risk tranching like a collateralized loan obligation. There are trillions of dollars in liquidity tied up in insurance contracts that could be unlocked by MakerDAO/DeFi. I don’t think deal flow would be an issue so long as the terms of the loan are competitive with the market. The banks can loan at Prime Rate so that is the benchmark to beat for the sake of taking on more risk in DeFi. Many wealthy individuals go to banks and do premium financing whereby the bank pays the premiums on the policy and when it has been fully funded (about 5 years) the loan is repaid by the growth in cash value. So maybe if it is a multi-million dollar deal MakerDAO could get into that niche market to make it worth the underwriting process. @mrabino1 would probably know best what the path forward for MakerDAO should be once RWA are up and running. I am just super excited by the possibilities that onboarding this collateral would bring. 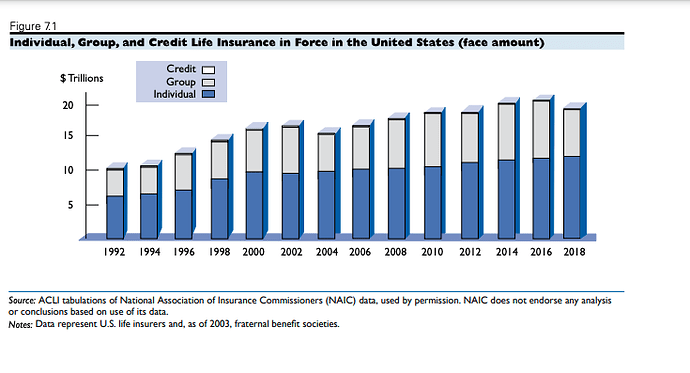 Great, that’s what I hoped you’d say. Do you know of any originators? I would be happy to start doing some outreach to educate them on the protocol.

There aren’t any at the moment which is why I was suggesting to work with CrescoFin since they are building out the infrastructure for a captive insurance company and have lots of years of experience in the insurance industry. They already have a partnership with Visa to bring credit cards linked to insured deposits. Imagine being able to have a line of credit that generates an insured 3% interest on any unused balance and paying a small fixed interest rate on the money borrowed. At the moment they are working with Aave, but I don’t see why we could not work with them as well since liquidity is fungible. 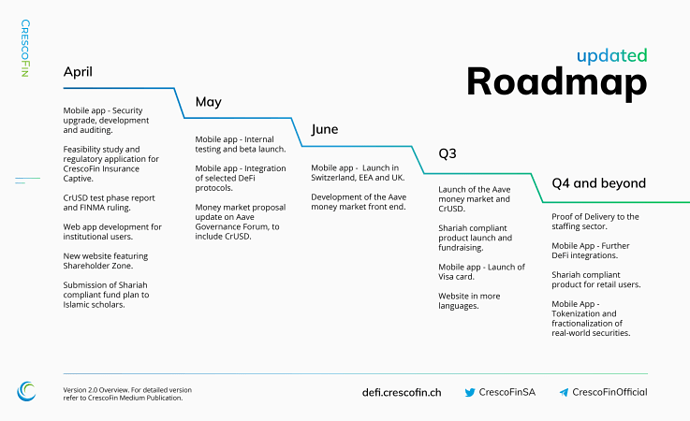