[Informal Poll] Why deploy on xdai?

Why to deploy on XDAI
1.Usable for everyday transactions;
2.It uses EVM;
3.Works for over 2 years;
4.Speed of innovation (fail early, fail fast, fail often);
5.Community acceptance;
6.It is more or less a copy paste process.

Why not to deploy on XDAI?
1.XDAI can not be considered being even close to the same security or trust level as Ethereum mainnet;
2.It is more or less a testing ground;
3.Risk level is of the charts;
4.Playing with peoples money!!!
5.Playing with the Maker name!!!

It is a mater of risk evaluation.

Deploy on XDAI with xDAI cap for ETH:

Deploy with the name

Shouldn’t there be an option for “don’t deploy on xDai”?

Yes. There should be. But- I think it is smart to push it to stay relevant.

I voted for YES, but I agree an option for “don’t deploy” is required.
@Kukkio please add it.

It would be awesome if people voting for NO could explain their hesitations.

I Added the NO option.
I voted for the multiple scaling solutions.
Ethereum will remain the safe place for the foreseeable future. All the other chains are playgrounds, nothing more (until proven otherwise).
Why xDAI first? Because it is the easiest. Time is critical.

Deploy ‘what’ on xDAI - governance or Maker Vaults, liquidations, etc.?

I think the ‘Why not’ points are mostly made up.

1.XDAI can not be considered being even close to the same security or trust level as Ethereum mainnet;

DPOS is the only difference that i can tell. Less nodes maybe less security but would rather experts speak to this.

2.It is more or less a testing ground;

This is decidedly NOT true. xDAI is in use now and NOT a testing ground. It is also rapidly becoming a L2 hub location with bridges not just to Main net, but soon Matic (March latest), and shortly there after Binance Chain.

3.Risk level is of the charts;

No clue what this means. Chainlink is also soon going to be release on xDAI so we will have chainlink pricing oracles (namely for agaave).

These are just made up points. If you think playing with people’s money on xDAI then you could make the same points of Ethereum…

It isn’t just a risk issue but a usability one. Dust approaching levels that basically make existing small vault liquidations cost too much. High Main net fees are pretty much pricing the people Maker wanted to serve (the underserved) out of the market.

Here is a valid point. Technically how would Maker Mint DAI for xDAI chain because you can’t just mint DAI on xDAI. You have to basically mint DAI on mainnet and bridge it in. But I expect this is easily surmountable by taking part of the surplus and bridging it into xDAI for use by a Maker fork.

I think if there was a real point its that a better L2 probably will show up (optimistic) and it might be prudent to wait for that. I know a lot of development is lining up for optimistic but I also know a lot of L2s are going now (Matic, Binance, xDAI) and xDAI is focused on bridging as well as becoming a L2 hub.

Maker can sit and wait and hope main net fees come down or they can decide now to put up an instance somewhere. Since xDAI is EVM compatible porting should be easiest on xDAI than any other L2. Development is the primary hitch here and Agave will be released soon on xDAI (everything is ready to go we just need the reliable oracle hooks).

Either way DeFI will make it to L2, the real question is whether or when Maker will move there.
You also ignore another important point. Since the token that powers transaction on xDAI is DAI basically fees will always be denominated with tokens that have a fixed value. 100gwei on xDAI is vastly different in cost than 100gwei on ETH.

Hey, @Kukkio. Thanks for the informal poll!

I’d also ask for an ‘abstain’ voting option for people to show interest in the issue without leaning one way or the other.

My question is why is the current system where Dai is minted on ETH but bridged over to multiple mainnets and L2 not enough? xDai has TVL of $16.3 million and considering there’s not much compostability (Money Lego) on xDai yet, it seems too early to consider minting directly on xDai.

I guess for big players, mainnet suffices but there are significant limitations:

Vaults in xDAI could be created by small-fishes, who might benefit from having a 100usd worth Vault. And I believe there are plenty of these fishes.

Will it have a serious impact in the finances of MakerDAO in the short term? No.

Can this be useful to some people, regardless of the money they produce to us? Probably yes.

But I guess my point is once let’s say you mint Dai on xDai, is there a lot you can do? Like for example, if it’s on ETH mainnet, you can swap it on Uniswap, lend it out on Compound and AAVE and etc. I don’t think there’s an exchange where you can deposit Dai on xDai either. Happy to hear some Dai use cases on xDai though.

There is quite a bit of stuff already on xDAI, Projects & DApps - xDai STAKE, starting from https://honeyswap.org/ . More is coming soon (Chainlink oracles, Gnosis etc)

But even if there was none, it would allows people to:

But, again, I personally think that most people will not bring back their tokens if we are talking about small vaults (<1000usd) and just exchange within the xDAI universe (starting from https://honeyswap.org/)

I didn’t realize some of these are working on xDai. It’s pretty interesting. Thank you for sharing

I would like to try xDai (I haven’t) before voting for it. But what worries me is liquidity and projects. Do we have an AMM dapp there?, would we be the only Lending protocol in the network? What other amazing projects are being built for the network?

Note that I don’t know much about xDai and questions could have no meaning!

But in general, if we deploy in a network simply for users going there and having to come back to Ethereum to do stuff, we’re not solving the issue.

IMHO, what is important is to deploy into a network which have DEFI dapps, where you could earn interest on your crypto, with a Uniswap-equivalent, Maker-equivalent, Aave-equivalent, Yearn-equivalent, new projects pumping up constantly. Otherwise we’ll be just spending resources in all this deployment with very low possibility of usage.

I’m going to research more, but if these points are not covered, sadly I’ll vote no (and these above would be the reasons).

Great stuff, this is a better ground to support the deployment there.

Do you know if the TVL mentioned in DEFI pulse is only related to assets on Ethereum side?, or it can be assumed it is the TVL used within the xDai network?

I’m going to research more, but if these points are not covered, sadly I’ll vote no (and these above would be the reasons).

I believe you’ll find a positive answer to all your questions. 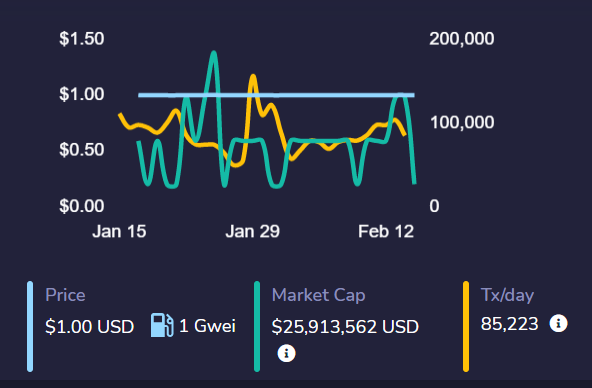 Do you know if the TVL mentioned in DEFI pulse is only related to assets on Ethereum side?, or it can be assumed it is the TVL used within the xDai network?

Follow the link of @Kukkio : xDai (xDAI) Explorer
and look at the top-left. You’ll see something like this on the “i” below “Market Cap”: 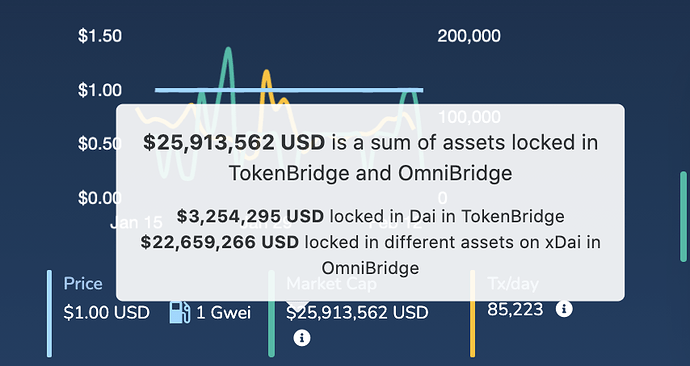 I have used Perp protocol on xDAI and it has been a great user experience. I highly recommend trying out xDAI.

Don’t get me wrong here.

I am a liquidity provider on Honeyswap for quite some time alraedy. I know it works. But a database on AWS and BNB works as well until it isn’t.

ETH gas fees are not a problem. It is a feature.
ETH gas slows the velocity of money on mainnet just enough, that people are not exiting from their ERC20tokenxxx/WETH pools when the market dumps. It just is not worth it, unless you are a whale. But even a whale might be OK with the profit from a pool. The ETH Gas fee also keeps the not qualified investors away.

P.S. I also think the High Ethereum TX Fees are protecting the small & new investors from getting hurt. And that’s a good thing. I heard an attorney say it’s like protecting unaccredited investors.

Maker has an instance on ETH Mainnet. It is the most secure, and should have the biggest vaults.

But a high velocity of money environment is also needed.

And the Maker vaults were a solution for me, when the fees were low (it is still a solution, because i did ride the wave). But i cannot recommend it to most of my friends, who are just starting in crypto.

Dude I just tried HoneySwap --wanted to Swap xDAI for MANA, but it has 39% slippage?