Interview with Seamus on the Oracle Team

SAN FRANSOKYO – The toughest part of being an investigative crypto-journalist is having to be critical of the protocols you love. Which is why it broke my heart to learn about Maker’s oracle outage a few months ago. Alas, it is my duty to ask the tough questions, so I reached out to Seamus, a developer on Maker’s oracle team, to get to the bottom of the story.

Uncle: I’m just going to get right into it Seamus, WTF happened!?

Seamus: Yeah, it was our bad. We missed the rapid growth in the Scuttlebot state size, which led to the oracle outage. But the event really opened our eyes to the over-complexity the system, so we gutted the whole thing and replaced it with something simpler.

Seamus: Yeah, managing the light feeds, dark feeds, and VWAPs just got too complicated, so we switched to a multisig and are entering the prices manually.

Uncle: Wait, did you say manually?

Seamus: Yeah, the DeFi space is pretty comfortable with multsigs right now. I mean, if you knew how much value was secured by multisigs, you would vomit. But Maker has historically been criticized for not adapting to the times, so this is more or less a response to that.

Uncle: So how do you use a multisig for the oracles?

Seamus: Well, pretty much everyone on the oracle team is a yield-farming degenerate on a razor’s edge of liquidation (shout out to Mariano!), so we’re already plugged into CoinGecko 24/7. Then every hour we coordinate in our group TikTok chat to decide what prices to push. 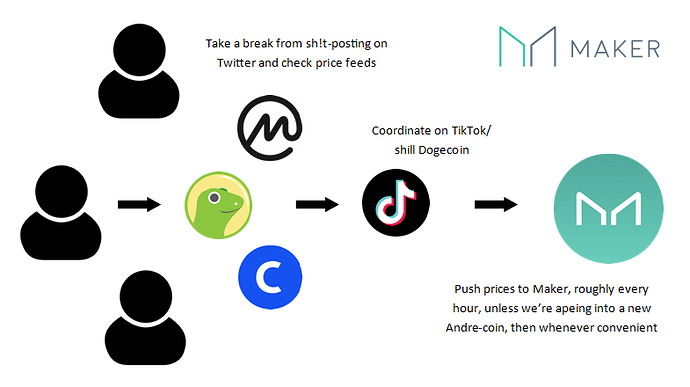 Uncle: And you don’t think that is a security risk?

Seamus: Hardly. During the last ETH pullback one of the larger vaults was going to be triggered for liquidation by only $3.50. We were pretty confident ETH was going to rally by the next OSM update, so we rounded up and saved the vault. To me, that’s just good customer service.

Uncle: I don’t know. Maker has billions of dollars locked in the protocol. It seems exceptionally irresponsible for prices to be determined by a small group of people in a chat room.

Seamus: I mean, that’s pretty much how Chainlink works…

As always, I’ll be following up on this story as it develops. Follow me on Twitter for the latest crypto news @UncleRewards. Also, I’m trying to pay off my student loans through SourceCred so…

I know this might be fun, for those who get the joke…
But is it responsible to tweet this in the open?

I think its great. Funny work as always @Uncle!

I assure you everyone at The Uncle Rewards pledges an oath daily to uphold journalistic integrity. As the editor in chief, I am more than willing to print redactions when presented with accurate data.