Legal Disclaimer: This communication is provided for information purposes only. The views expressed here are those of the individual Maker Foundation (“Maker”) personnel quoted or who present said materials and are not the views of Maker or its affiliates. This communication has been prepared based upon information, including market prices, data and other information, from sources believed to be reliable, but Maker has not independently verified such information and makes no representations about the enduring accuracy of the information or its appropriateness for a given situation. This content is provided for informational purposes only, and should not be relied upon as legal, business, investment, or tax advice. You should consult your own advisers as to those matters. References to any digital assets and the use of finance-related terminology are for illustrative purposes only, and do not constitute any recommendation for any action or an offer to provide investment advisory services. This content is not directed at nor intended for use by the MakerDAO community (“MakerDAO”), and may not under any circumstances be relied upon when making a decision to purchase any other digital asset referenced herein. The digital assets referenced herein currently face an uncertain regulatory landscape in not only the United States but also in many foreign jurisdictions, including but not limited to the UK, European Union, Singapore, Korea, Japan and China. The legal and regulatory risks inherent in referenced digital assets are not the subject of this content. For guidance regarding the possibility of said risks, one should consult with his or her own appropropriate legal and/or regulatory counsel. Charts and graphs provided within are for informational purposes solely and should not be relied upon when making any decision. The content speaks only as of the date indicated. Any projections, estimates, forecasts, targets, prospects, and/or opinions expressed in these materials are subject to change without notice and may differ or be contrary to opinions expressed by others.

KyberNetwork is an onchain decentralized exchange that aggregates liquidity from a variety of sources. Orders are relayed to the network via integration partners. KyberNetwork has five main stakeholders.

Staking, Voting, Delegation and Rewards after Katalyst and KyberDAO

The daily active addresses have started to increase lately, due to (perhaps) the Coinbase listing, general crypto adoption, and anticipation for the Katalyst network upgrade and the establishment of KyberDAO.

Onchain transaction volume tells a slightly different story than DAA, but in combination the two give us good insight into the nature of token holders who accumulated or held at various points in the token’s history. During the initial days of the token (ICO, initial listings, and frenzy), the DAA was high but transaction volume was relatively small. This indicates that initial holders were more retail-like, dealing with smaller amounts individually. In the middle of the period (2018-2019), we can see an increase in transaction volume despite low DAA, indicating that larger holders were likely accumulating. The most recent period may indicate that traction has been significantly increasing since February and that DAA metric is not being manipulated. 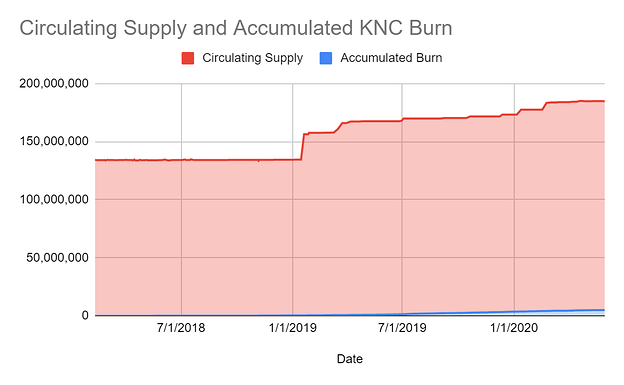 Even though KNC has a burning mechanic, the circulating supply is being inflated over time. The protocol burned ~4.9m KNC since launch, but the team and the Kyber company have been steadily releasing vested tokens into the market. Below is the KNC balance over time on the Kyber team multisig address, which holds tokens for the team and company. 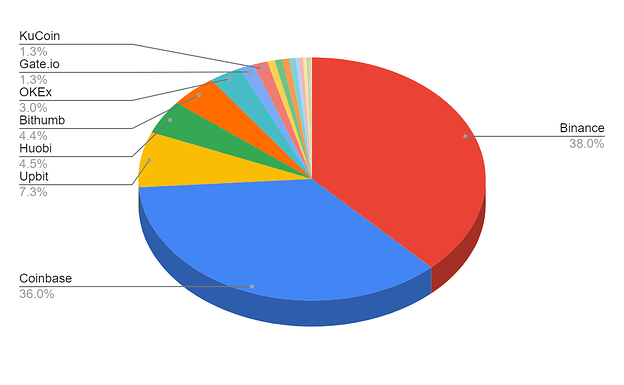 Approximately 41.8% of total token supply is currently in custody of centralized trading venues. The figure is quite high for any asset and presents a certain degree of exposure to exchange hacks and other exchange related issues (such as exchange counterparty risks). With establishment of KNC governance and voting, the custody related risks will be greater as the mechanics offer new vectors to exploit and benefit from large amounts of KNC tokens in the wrong hands. 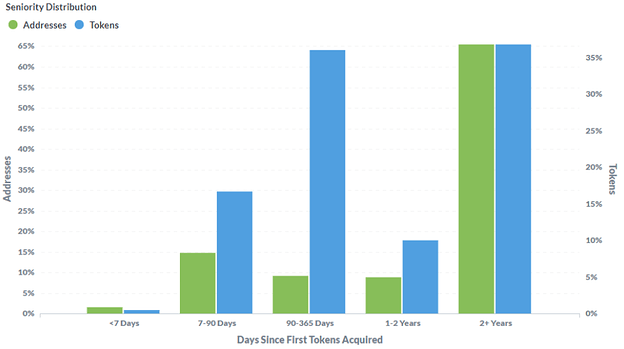 According to the seniority distribution of tokens, approximately one third of the token supply has not moved in the previous two years. This group is likely the first wave of token holders that have either held since the token sale or have acquired the asset shortly after exchange listings. This group is also the most distributed as they represent approximately 60% of addresses. Another interesting observation is the group of holders who have acquired KNC in the preceding year. They hold approximately 60% of the token supply, but represent only 10% of addresses. This may indicate increased institutional interest in KNC.

Aggregated daily trading volume and market share distribution from the largest venues can be seen in the charts below. Total trading volume significantly increased after the Coinbase listing in February 2020. Coinbase also gained a large market share considering how long the token has been listed there. We applied a significant haircut (90%) to trading volume reported by OKEx, as their volume significantly increased simultaneously with Coinbase after their listing, even though OKEx listed the token in 2017 and has relatively much lower token deposits in their custody. 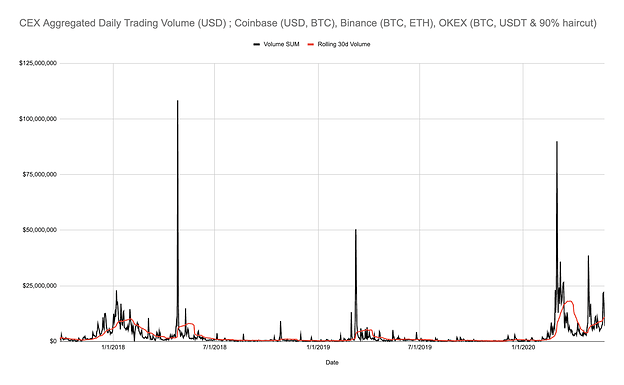 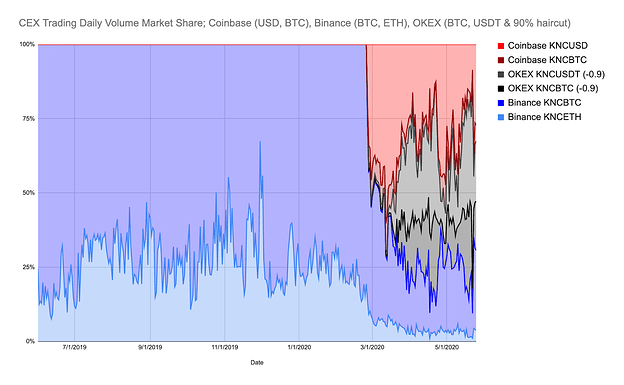 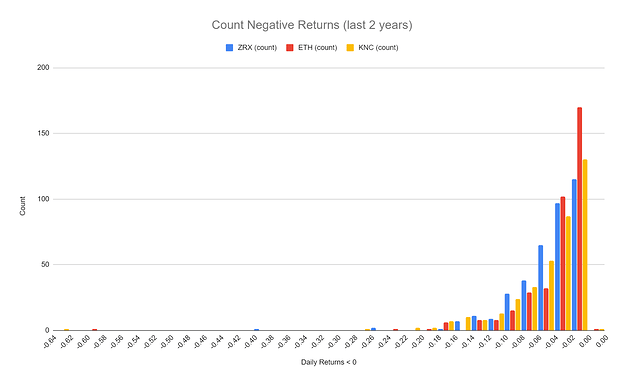 The only notable presence for KNC on leverage and lending platforms is Aave, which has approximately $2.12m of total supply, with only about $20k borrowed. We could not find any KNC deposits in centralized lending services such as Celsius, BlockFi, Nexo.

Network is showing a healthy trend in trading volume, which is also supported by growth in the number of daily trades. 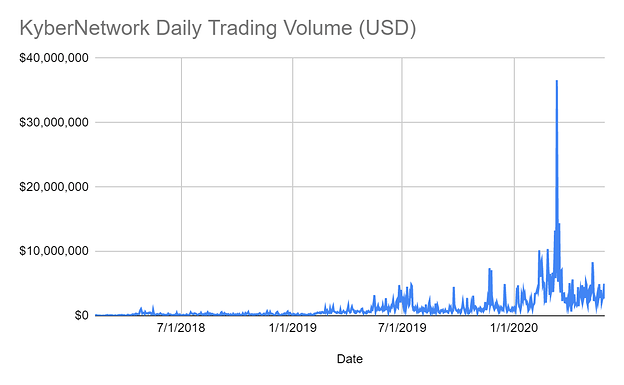 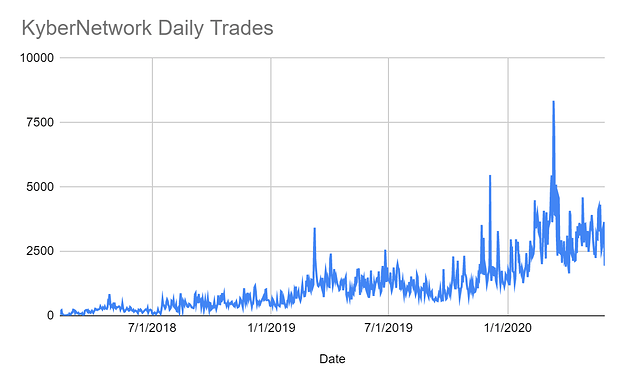 We use the model described from the governance call here: a credit risk model that estimates the loss distribution of a portfolio of KNC Vaults. Risk parameters are estimated from this hypothetical loss distribution. Inputs to the model are derived from trading data along with stressed input parameters. A link to our model specification with inputs and outputs can be found here. Auction parameters have been selected to mirror those for ETH, with the exception of the lot size that has been normalized to a ~$20,000 amount

Chart layout/template with the metrics used in this report:

Few more added to give a bit more of a behaviour analyses of the network holders.

This is exiting! MCD is really coming into the light now with so many new collateral types on the horizon. KNC looks like a good fit. Thank you providing all of this.

Hey @cyrus - thanks for all this - very impressive & informative. Could we talk a little about:

adding additional governance features such as staking and voting

Will this materially change the KNC ERC20 token contract and, if so, has the SC domain team been made aware and do they have a plan to handle this? What will happen if the adapter is frozen for some period and there is significant KNC locked in the system?

Kyber Company/Team. They currently serve as network maintainers and have all administrative rights to change the system.

Is the plan for KyberDAO to replace this kind of admin access? Or is is just about more open voting on fee structure, rates and distribution? That multisig wallet makes me nervous…

I very much agree that 41.8% of total supply on centralized trading venues, with the establishment of of governance and voting, could lead to new vectors for exploit and benefit. This is not necessarily unique to Kyber, but is quite a profound point I think it is worth re-highlighting in any tl;dr.

we encourage the community to incorporate this risk into the risk management process accordingly.

I can understand your hesitancy here, but how - practically - is “the community” meant to achieve this? Go troll Stephen Palley and Preston Bryne until they either send herring/marmots to attack us or provide an opinion?

Having the community reach out to more qualified people though seems like a natural starting point.

I think this is the key. I’m hoping that we are able to find community members that have legal experience and encourage them to share that experience in whatever manner they are able given the professional restrictions they are under.