On a recent Governance & Risk call some concerns were raised about Liquidations 2.0 parameters chosen which in effect has expected auction duration of approximately 40 minutes. This is based on parameters proposed by us for LINK-A and YFI-A.

We have talked about trade-offs of long versus short auction duration in our initial LINK-A analysis. We also noted that we prefer longer duration than the one recommended by Gauntlet, which was 16 minutes.

To not go too much into details again, we made an analysis that shows what kind of losses Maker or Vaults can expect if bids start coming in late due to network congestion or any other reasons. Or in other words, what could be the loss for Maker or Vaults if keepers start bidding below market prices according to the price curve selected.

First, see again the price curve that is based on parameters proposed:

Also note that after the price from the price curve reaches 52% of OSM price (defined by ‘cusp’ set at 0.4), bids are no longer possible and auction can be redone by using the new OSM price.

What happens if no one bids after 40 minutes, but only after 50 minutes or even later? We made a simulation below that shows how this affects Maker and Vaults. 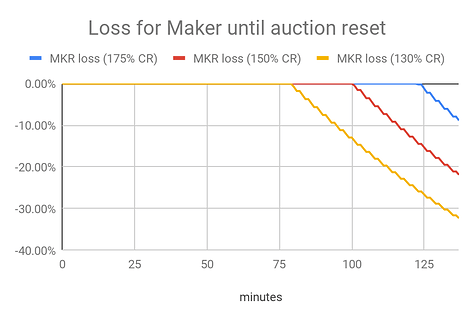 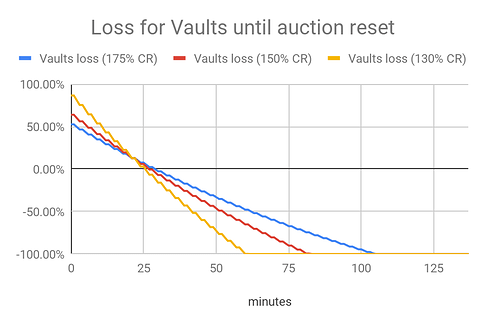 Again, this assumes market prices are stable which is not something we can expect. If market prices fall additionally, the loss associated with late bidding can be even more severe, but presumably bids in such case will have less delay since the expected auction duration gets longer (we define late as time delay from the point in time bid is expected to occur due to market opportunity). This simulation also assumes vaults get liquidated exactly at their liquidation ratio, whereas in reality they get liquidated below liquidation ratio based on OSM price, which again leads to greater loss.

Late bids are much more problematic for Vault owners who can lose a larger share of their overcollateral value if bids are low. You can see that almost half of overcollateral for 130% LR vaults is already lost initially due to 13% penalty fee. If the bid comes only about 20 minutes late after the expected 40 minutes duration, all the overcollateral value is lost for such a vault. For higher liquidation ratio vaults (i.e. 175%), about 1 hour late bids erase all of the vault owners’ value.

What does all of this tell us? If we are concerned about too-short auction durations where bids might be delayed for many minutes or even up to an hour, we are mostly concerned about the value that might be lost by vault owners, since Maker is pretty well hedged in that time frame.

Now, if we are to make auctions longer because of this concern, we start increasing market risk as collateral market prices might be deteriorating every passing minute. In other words, even if we don’t have delay on bids and they are perfect to match market price in let’s say 80 minutes, the market price could already move downward additionally. Note that under current liquidation system vault owners are already pretty heavily exposed to market price risk since auction duration takes 4 hours.

It is hard to make this decision on a quantitative basis because so many different factors are at play and the most relevant one is network congestion under stressed conditions leading to delayed bids which is hard to predict. Any kind of feedback by the community would be appreciated here, especially since we are to propose parameters for ETH and WBTC vaults types where much larger value is at stake.

Here we also want to note that we have one other parameter at hand that mitigates losses associated with delayed bids. It’s called ilk.hole which limits the amount of pending liquidations per vault type. If we lower the value for this parameter, the losses simulated above can be lowered in nominal amounts, but we again start increasing market risks as vaults could get liquidated later at lower collateralization ratios.

Thanks for the detailed write-up. Much appreciated!

Yes, TY Primoz–as much as I understand Liquidations 2.0, your Team’s Simulations on Black Thursday using buf of 1.30 and coming to the conclusion that auctions would settle in 42 minutes builds confidence in your suggestion to have a 40 minute timeframe. It might also be interesting to see the same analysis done for the sell-off hat happen during the Thanksgiving Holiday (November 2020). I consider Black Thursday and that pullback as a nice test of high Mkt volatility and panic.

All-in-all the $10B liquidation selloff that occur this past weekend, proved once again that it was mission impossible to get an order in–as gas fees were north of 700+

Hope to hear more opinions from the big-brain community here.

But when it comes to deciding whether the duration is too short which in effect could lead to delayed bids, different factors are at play, such as network congestion and keeper participation. This is something we can’t really measure or address quantitatively. The best we could do is provide analysis to show what happens if bids are delayed for these reasons - how it affects the system and vaults.

To put it simple, if network worked without frictions under stressed conditions (no network congestion issues) or if Maker itself performed liquidations by system directly trading collateral for DAI (no reliance on keepers), we would set parameters such that liquidations happened instantly as centralized exchanges do. This is why Maker aims for longer duration, because it relies on keepers and network capacity.

It feels like you don’t want to choose one set of auction parameters because whatever parameters you choose have pros and cons. I’m just spitballing here, but what if every liquidation initiates two auctions with different parameters and the collateral is split between the two auctions? Is this a good idea?

Hm I think it would have pretty much similar effect if you took the average of those two sets of parameters and apply it as one, unless I misunderstood. Plus I think that is hardly possible with the current Liq 2.0 implementation.

I don’t think average is the correct operator. It’s more like two different trading strategies. You might liquidate half the collateral short-term lower risk with less great a price and the other half long-term higher risk with maybe a better price.

Plus I think that is hardly possible with the current Liq 2.0 implementation.

Yeah, I’m just trying to think outside the box.

The best we could do is provide analysis to show what happens if bids are delayed for these reasons - how it affects the system and vaults.

Got it. And circling back to a few months ago–the Oracles team (Nik) had brought up the idea of raising the Oracle Sensitivity on LINK, and you mentioned that on average Vaults would be liquidated at a lower CR (increases slippage) – and I was wondering if the sensitivity was ever increased for LINK? Just wondering if it was decided to update the LINK oracle less often…

And circling back to a few months ago–the Oracles team (Nik) had brought up the idea of raising the Oracle Sensitivity on LINK, and you mentioned that on average Vaults would be liquidated at a lower CR (increases slippage) – and I was wondering if the sensitivity was ever increased for LINK? Just wondering if it was decided to update the LINK oracle less often…

Yes, good point, oracle sensitivity was changed to 4% except for ETH, WBTC and LP tokens.

This would make the contract for liquidations more complicated but more importantly it would effectively double the gas cost for liquidating a given collateral so the dust parameter for every vault would have to be doubled. Considering we are already pricing out many with our dust parameters that is something that would only really be acceptable on a l2 imo.

I’m not sure whether my idea is practical. However, it seems easy to address your objection. If the notional amount is small then have a single auction. Only use dual auctions when the notional size is above some threshold.