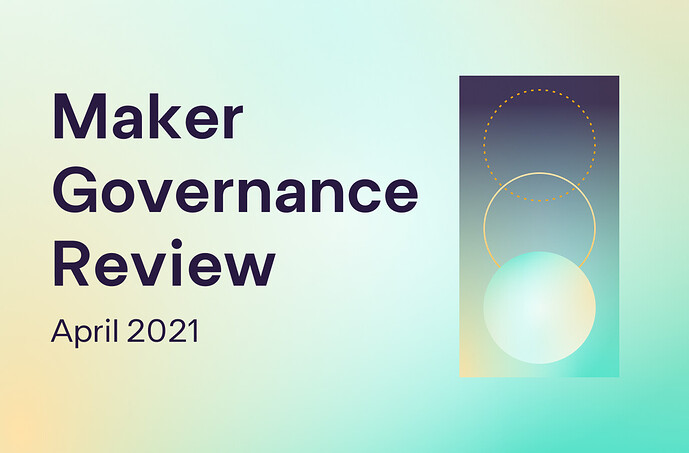 The Maker Governance Review is a monthly recap of all Governance activity, from Governance blog posts and polling/voting history to Governance Cycle progress. Each review is written to keep the Maker community informed of Governance developments.

April was another significant month for the Maker Protocol, seeing a number of highly anticipated MIPs get passed along with a number of important changes and additions as usual.

The workforce at MakerDAO is evolving. Four more Core Units were voted in. Say hello to Content Production, Growth, MakerDAO Shop, and Protocol Engineering. Be sure to check out the Core Unit Corner to track what Core Units are in the pipeline versus which are already ratified and operating.

An updated liquidation system is finally live. Liquidations 2.0 contracts were authorized in mid-April alongside activation for LINK-A Vaults. The following Executive implemented YFI-A Vaults. And the Executive after that, on April 30th, included implementation for ETH-A, ETH-B, ETH-C, and WBTC-A Vaults. More Vaults are expected to be upgraded in the months ahead.

MKR Voters beefed up security. Accompanying an increase to the Emergency Shutdown Threshold, the amount of MKR needed to initiate an Emergency Shutdown; the engineering team added some important upgrades to the ESM and END Modules. Two bugs were fixed, and the team explained the logic behind decision-making around disclosure and the fix. This was posted in parallel with the Protocol Engineering Team’s Road to DeFi Safety piece.

A community-led petition letter to a16z was proposed on the forums in early March and moved on-chain to a governance poll in mid-April. The poll passed, but 66% of voters abstaining. This signaled that at least some MKR voters were in favor, though most were apathetic. No official response from A16z.

Real-World Assets are getting their start. New Silver Series 2 DROP was onboarded this month as the RWA002-A Vault. Not too long after that, we saw them generate 500k+ in Dai. One step in the right direction, according to the Real World Finance Core Unit, but still lots of details to be figured out.

The April Governance Cycle, which began on April 5 and ended on April 30, summary of changes:

MIP Amendments and Declaration of Intent

Visit the MIPs Tracker to learn more about MIPs and core unites in progress and view MIP statuses.

The April Cycle also included a number of Executive Votes that changed parameters in response to the conditions on Ethereum in addition to adding a couple of new Vaults. This included:

These polls gauge community sentiment for collateral onboarding. Greenlight Polls allow MKR token holders to signal their preferences for collateral types proposed through Collateral Onboarding Applications. These polls run for two weeks, starting Monday on the first week and the third week of each month.

April’s Greenlight Polls ended on May 3rd, with the following results:

Seven collateral types were considered; all of them were greenlit by the community.

May is here, and there are some things to watch out for. Formal submissions for the May cycle are wrapping up tomorrow, May 5th.

Two more Core Units! Both the Strategic Marcomms Core Unit and the Sustainable Ecosystem Scaling Core Unit have entered into the May governance cycle.

LongForWisdom and the GovAlpha team propose changes to the Monthly governance Cycle to streamline the procedure, aiming “to reduce the cost of participation for governance by reducing the number of votes that take place for each monthly cycle.” In addition, an amendment to clean up MIP0 is also in the pipeline for May.

MIP50, the Direct Deposit Module, is also being entered into formal submission. The Direct Deposit Module interfaces with third-party lending protocols to directly supply Dai to their markets. Maker Governance is able to pick a target variable borrow rate, and the module will automatically deposit/remove liquidity to ensure that the target rate is hit. This will be yet another technical MIP which, if passed, will be added to the Protocol Engineering teams growing backlog alongside Dai Flash Mint Module, Governance Contract Upgrade, and others.

Finally, MIP49, Staking Rewards, is being entered into formal submission. MIP49 covers the creation of a Staking Rewards process for MKR token holders, designed to distribute DAI as a percentage of protocol profits. MIP49 would entitle MKR holders to a share of this percentage based on the weight of their MKR staked in the Governance Contract. Should this proposal be accepted by the community, the plan would be to use @hexonaut’s DssGovRewards Code to implement. The MIP also mentions its intentionality behind not setting a particular path for the distributions to allow for different implementations in the future and some flexibility around future Governance improvements. 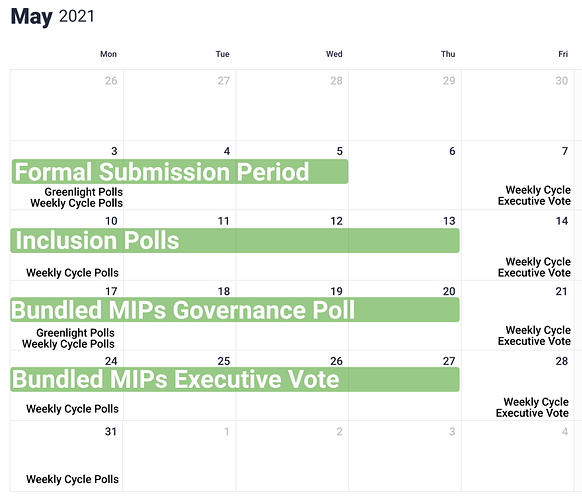 MIPs support the organic growth that further expands MakerDAO’s self-sustainability by providing the Maker community and all stakeholders with a standard approach to proposing improvements, specifications, and process and state changes to the Maker Protocol and MakerDAO.

This is excellent, thanks guys.