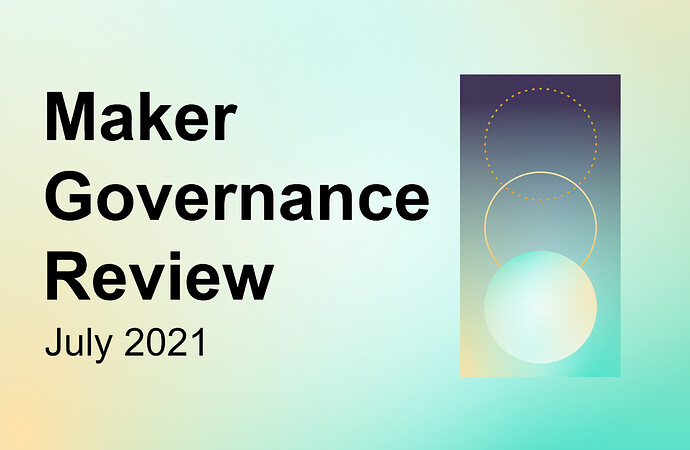 The month of July was very exciting; we had three executive votes, three weekly governance polls, three greenlight polls, and eight ratification polls. Delegation applications and the MKR Holder’s Guide to Delegation have been the talk of the month. There are already several MKR holders who have proposed themselves as Delegates, along with a number of shadow delegates. There was also much discussion and progress regarding Maker Institutional Vaults with the Growth Core Unit leading the way in discussions. In addition, there has been an expansion in calls for the Maker ecosystem; we had three Speaker Series calls along with the first Meet Your Delegate call, which are all posted on YouTube. Check them out!

The month of July contained eight ratification polls, of which only four have passed. This includes:

View a detailed breakdown of the rate changes here, published by the Parameter Proposal Group.

Greenlight Polls allow MKR token holders to signal their preferences for collateral types proposed through Collateral Onboarding Applications. The community greenlight polls occur at fixed times each governance cycle, starting on the 1st and 3rd Mondays of the month and running for two full weeks.

The month of July had three Community Greenlight polls: 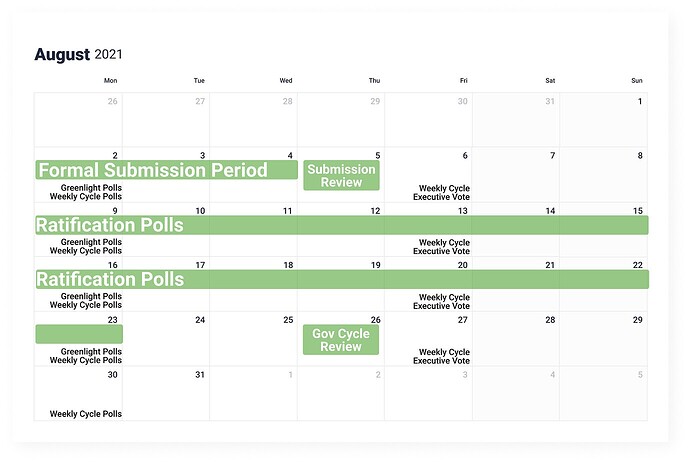 August is here, and there are some things to look out for.

Delegation has been the talk of the season; expect more MKR holders to propose themselves as Delegators. There is also a brand new delegates page on the MakerDAO Governance Portal, thanks to the dUX team!

August’s first Executive Vote will include the addition of four Centrifuge assets; CF-DROP, HTC-DROP, FFT1-DROP, and P1-DROP, which will be added to the Maker Protocol as new RWA vault types if passed. Additionally, there are polls currently live (at time of posting) to greenlight 120dB Films, increase the UNIV2DAIUSDC-A debt ceiling, and change parameters as proposed by the MakerDAO Open Market Committee.

Check out the Forums because there will be some general Forum improvements concerning tags, which should help refine posts and searches. The Protocol Engineering Team has also proposed a blueprint for Institutional Vaults. If passed, new Vault mechanisms specific to Institutional and Long-term Vaults would be implemented.

Carl Vogel from the Paxos team proposed creating a PAX PSM to extend PAX as a way to diversify DAI collateral. This comes on the heels of community concern around the growth of Dai’s USDC backing, which sits at 60.6% according to Daistats.com. To sweeten the deal, Paxos plans to add DAI to its platform before Q1 of 2022.

Beginning Monday, August 9th at 16:00 UTC, Ratification Polls for formally submitted proposals will go live and run for two weeks until Monday, August 23rd. At the moment, it looks like there will be a couple of Core Units being proposed, as well as B.Protocol’s declaration of intent to create a new vault type that’s integrated with them.

Check out all the MIP proposals in request for comments stage, and be sure to leave some feedback! Did you know you can get rewarded with Dai for RFC feedback and other forum activity by Opting-in with SourceCred?