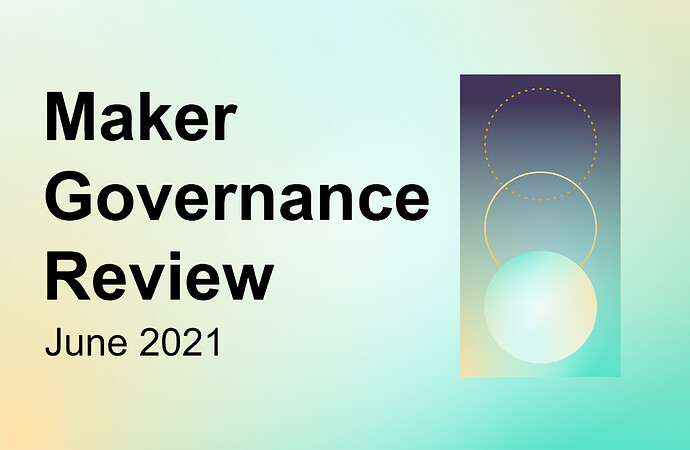 The month of June was quite productive! Beyond some usual stuff like budget distributions to 7 Core Units, we also had the final 8 vaults added to the Liquidations 2.0 framework, with stablecoin liquidations all being disabled, maintaining the same case as before. We also saw the launch of the BRAND NEW Dai Flash Mint Module, DssFlash. The Global Debt Ceiling increased by 500 million DAI in order to allow continued usage of the Maker Protocol. An urgent Debt Ceiling adjustment for the PSM-USDC-A from 3 billion DAI to 4 billion DAI was passed. And finally, Payton Rose was onboarded as Governance Facilitator for GovAlpha!

There was no bundled MIPs Executive vote during June 2021, and there will no longer be one moving forward due to the new Governance Cycle process passed in May. Instead, the month included 7 Ratification Polls, which all passed:

Along with a number of other decreases proposed by the parameter proposal group, view a detailed breakdown here. 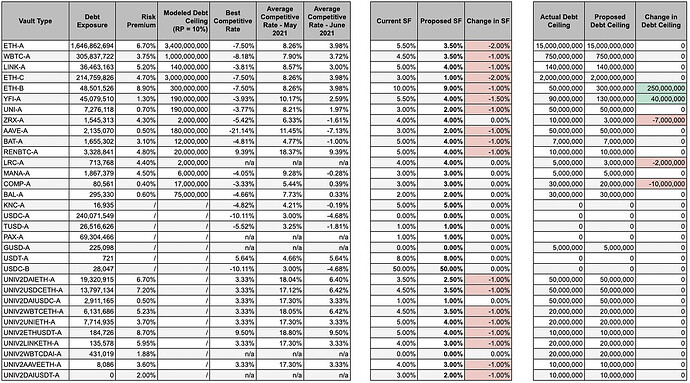 As part of the Protocol Engineering Core Unit architectural debt cleanup, stablecoin vaults have been upgraded. Maintaining the case from before, Liquidations have been disabled for all these vaults.

Added to the Liquidations 2.0 framework, though liquidations remain disabled:

Yearn Finance has been added to the following Oracles:

Greenlight Polls allow MKR token holders to signal their preferences for collateral types proposed through Collateral Onboarding Applications. The community greenlight polls occur at fixed times each governance cycle, starting on the 1st and 3rd Mondays of the month and running for a period of 2 full weeks.

The month of June had four Community Greenlight polls that began June 21st and ended on July 5th: 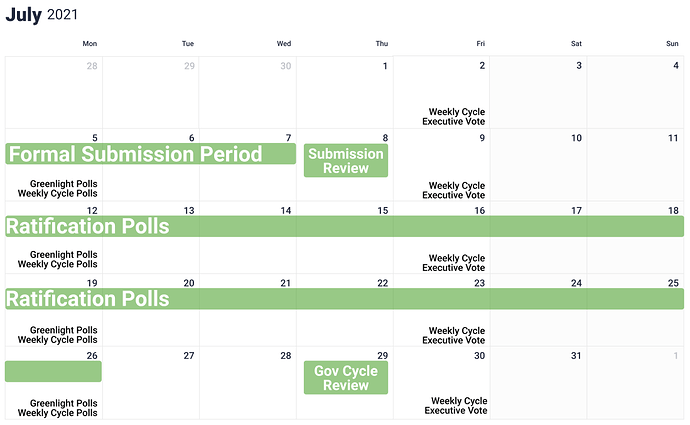 July is here, and there are some things to watch out for;

Voters should be aware of an active Executive Vote that began Friday, July 2nd, and, if passed, will trigger July’s Core Unit budget distributions in addition to a wave of stability fee decreases and activation of the USDC-PSM’s Instant Access Module-Debt Ceiling coupled with a large raise of that debt ceiling to 10 billion.

Formal submissions are open from July 5th to July 7th 4:00 PM UTC; check out eligible proposals below. Submissions will be reviewed on July 8th during the weekly Governance and Risk Call. Heads up to MKR holders who might be out of the loop, we are entering our second month using the new Governance Cycle.

There is currently an active Greenlight Poll for 0xBTC. Keep an eye on the weekly Maker Relay to find out if there will be a second set of greenlight polls later this month.

LongForWisdom and the GovAlpha Team will be submitting templates for Delegation and initiating a “Meet Your Delegates” series of public meetings. In addition, GovAlpha will be posting their first Quarterly Review.

Check out all the MIP proposals in request for comments stage, and be sure to leave some feedback! Did you know you can get rewarded with Dai for RFC feedback and other forum activity by Opting-in with SourceCred?