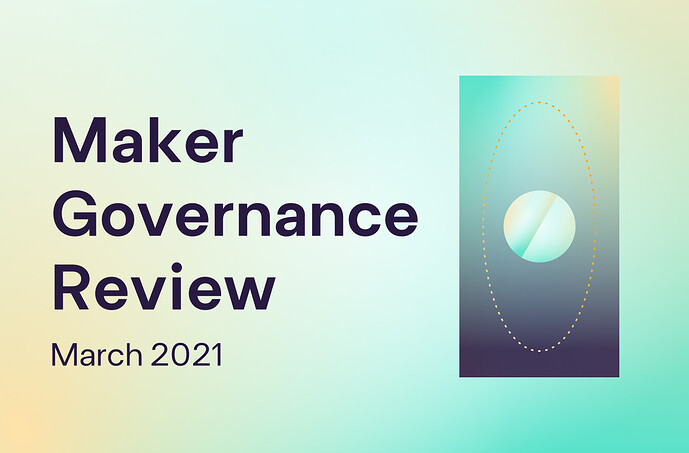 The Maker Governance Review is a monthly recap of all Governance activity, from Governance blog posts and polling/voting history to Governance Cycle progress. Each review is written to keep the Maker community informed of Governance developments.

March was a significant governance cycle for the Maker Protocol, seeing a number of key MIPs get passed along with a number of important changes and additions.

The Core Unit framework was officially ratified, meaning MakerDAO can now engage with independent teams to provide much needed services to the DAO and to compensate those teams. Core Unit teams can propose themselves to MakerDAO for consideration. An enormous step towards the further decentralization of the protocol.

We also saw a number of technical MIPs get ratified, that are now on the road to being implemented. Liquidations 2.0, a redesigned liquidation system that removes capital requirements for auction participants. And there are a number of others listed below.

The March Governance Cycle, which began on March 1 and ended on March 26, summary of changes:

The March 2021 MIPs Executive Vote was posted on Monday, March 22, passed on March 25, and was executed on March 27. As a result of the Bundled Vote the following MIPs were ratified :

Visit the MIPs Tracker to learn more about MIPs and core unites in progress and view MIP statuses.

The March Cycle also included a number of Executive Votes that changed parameters in response to the conditions on Ethereum in addition to adding a couple of new Vaults. This included:

These polls gauge community sentiment for collateral onboarding. Greenlight Polls allow MKR token holders to signal their preferences for collateral types that have been proposed through Collateral Onboarding Applications. These polls run for a period of two weeks, starting the third week of a given month.

Nine collateral types were considered, all of them were greenlit by the community.

April is ahead, and there are some things to watch out for. Formal submission for April Governance Cycle begins Monday, April 5th, and ends Wednesday, April 7th EOD UTC.

Smart Contracts and Growth Core Units have signalled their intention to formally submit their proposals for the April cycle, while others continue to develop and refine their proposals in the Forums in preparation for their own formal submissions in the months to come.

Implementation of Liquidations 2.0 will begin, with support for the LINK-A vault being the first step to look out for on April 9th’s Executive Vote and YFI-A support tentatively planned for April 18th’s Executive Vote. April 30th’s vote will depend on what is happening during that weekly cycle’s Governance Polls.

With the approval of the Parameter Proposal Groups MIP, we can now expect parameter proposals to come consistently on the first Monday of the month, for inclusion into the weekly cycle in the second week of the month. 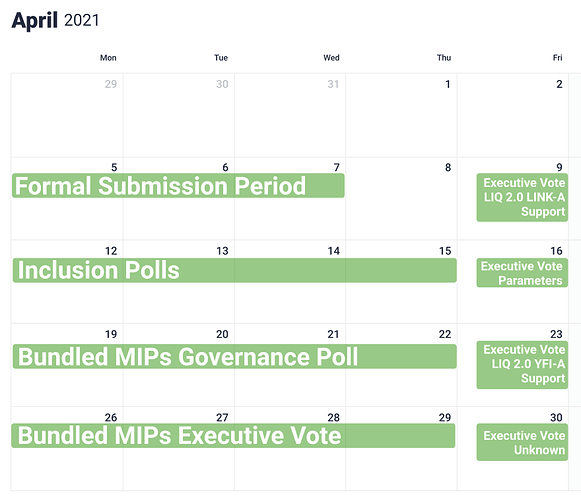 MIPs support the organic growth that further expands MakerDAO’s self-sustainability by providing the Maker community and all stakeholders with a standard approach to proposing improvements, specifications, and process and state changes to the Maker Protocol and MakerDAO.

This is awesome! Man, we have so much great summary content now. We’ve come a long way from a year ago. Great job!