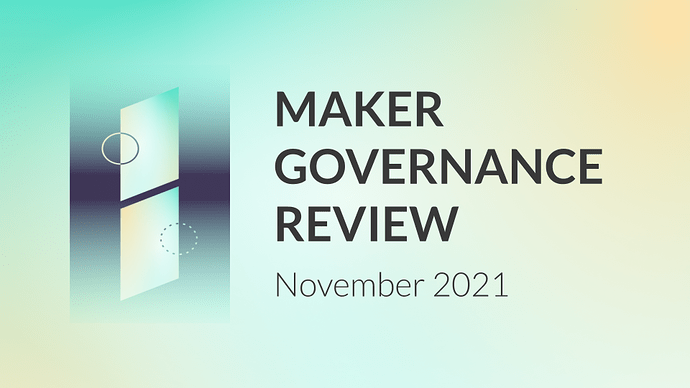 November has been an exciting month for the DAO, with three new Core Units, four passed Executives and over nine BILLION Dai in circulation.

Be sure to check out LongForWisdom’s post for details on the Holiday Break from Governance.

On November 11th, the Executive included parameter adjustments on the GUNIV3DAIUSDC-A vault and DIRECT-AAVEV2-DAI (Aave Dai Direct Deposit Module or AAVE D3M), increased the debt ceiling on WSTETH-A from 5 to 50 million Dai and returned unused Dai from the GovAlpha Core Unit budget to the Surplus Buffer.

As we mentioned, three new Core Units have been voted into the DAO, bringing the total number of Core Units up to nineteen. Congrats to the new Core Units; you can find them listed with the Ratification Polls below.

The month of November contained eight ratification polls, of which have all passed:

View a detailed breakdown of the rate change proposal here published by the MOMC.

The following vaults were onboarding during November:

As per this poll, the following covenant changes to P1-DROP (Peoples Company Series 1) occurred:

As per the successful outcome of this governance poll, the System Surplus Buffer increased from 60 million DAI to 90 million DAI over 30 weeks (1 million DAI per week).

As per the successful outcome of this governance poll, the Aave D3M Maximum Debt Ceiling increased from 50 million DAI to 100 million DAI. 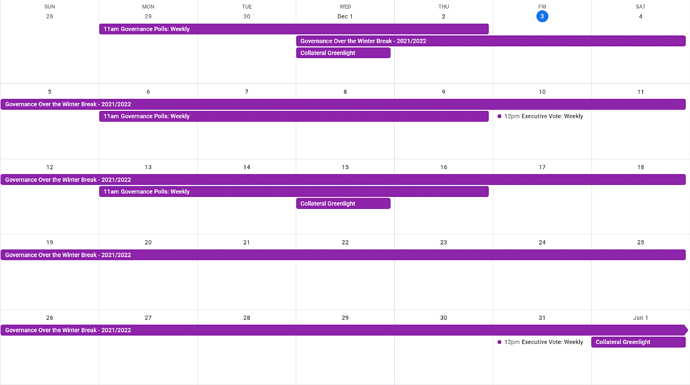 As per MIP51c4: Calendar Exceptions, there will be no Monthly Governance Cycle in December, i.e., no Formal Submission Window and no Ratification Polls. Check out the Governance schedule for December and January. Standard coverage is set to resume on January 10th.

Provided there is enough content to warrant one, the last Executive vote of the year will begin on December 10th, with the last Governance and Risk call falling on the 16th. Outside of this Executive, no polls are currently scheduled for the tail-end of the governance cycle.

Governance Communications will soon publish the first monthly Core Unit Updates Review; A ‘one-stop-shop’ to catch up on all Core Unit updates for the month. Next month’s Maker Governance Review will be an Annual Governance Review, covering the entire year of 2021.

That said, be on the lookout for LexMaker #2 - System of a DAO: A Legal Framework for Decentralized Autonomous Organizations, hosted by Miles Jennings of a16z, and David Kerr from Cowrie LLC. The two are set to dissect their published analysis on legal frameworks for DAOs.

Public Calendar
Bookmark or Subscribe to this calendar for Votes and Public Calls.

Disclaimer: This update is assembled by a group of contributing members in the MakerDAO community. This does not serve as financial advice or an inducement to vote in any specific way. This update is purely for information and communication purposes only.

We encourage you to complete our 3-question feedback survey.

The video version is now available on the MakerDAO Youtube channel: