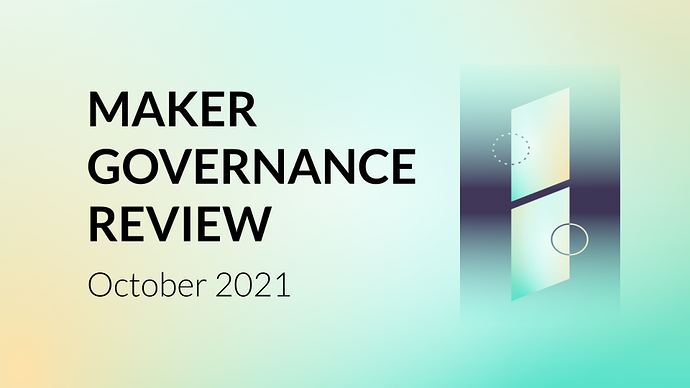 With four Executive Votes passed and a plethora of new projects launching and gaining traction, October has been an especially productive month for MakerDAO.

The passage of the final Executive of September on October 2nd kicked off the offboarding of several collateral types with USDT and also included Core Unit budget distributions for the month.

And last but certainly not least, the October 28th Executive included the onboarding of the Aave Direct Deposit Module (D3M), along with budget streaming to the Growth Core Unit as well as the newly onboarded Data Insights Core Unit.

It has also been a huge month for many of the projects MakerDAO has been working on:

Vote delegation also saw significant shifts after the former Recognized Delegate, Planet_X, announced an indefinite sabbatical from the DAO. A snapshot of the current Governance landscape can be found in the “Key Outcomes” section below.

After the redistribution of the MKR delegated to Planet_X, the current governance landscape is as follows:

The month of October contained six ratification polls, three of which have passed:

This poll did not pass to support the following changes:

This poll passed (with abstain being the popular vote) to support the following changes:

This poll passed to support the general direction laid out in the post ‘The Case for Clean Money.’

DAI streams were set up for the following Core Units:

Immediate DAI distributions were made for the following Core Units:

Per the Risk Core Unit’s ratified budget sub proposal, 300 MKR was transferred to RISK-001 following the successful passage of the October 1st Executive vote. This MKR is sourced from the MakerDAO treasury.

The following MKR Vesting streams have been established:

There were no proposed Stability Fee changes. The Open Market Committee observed no substantial change in the competitive environment since September.

View a detailed breakdown of the rate change proposal here published by the Parameter Proposal Group.

Several changes to the Debt Ceiling Instant Access Module Parameters of ETH-A, ETH-B, and WBTC-A were made:

The following Vaults were offboarded with described parameter changes:

WSTETH-A was onboarded during the October 22nd Executive with the following parameters shown in this poll.

Aave DAI Direct Deposit Module was onboarded to the Maker Protocol with the parameters below:

More information can be found on the forum post here.

The month of August had four Community Greenlight polls: 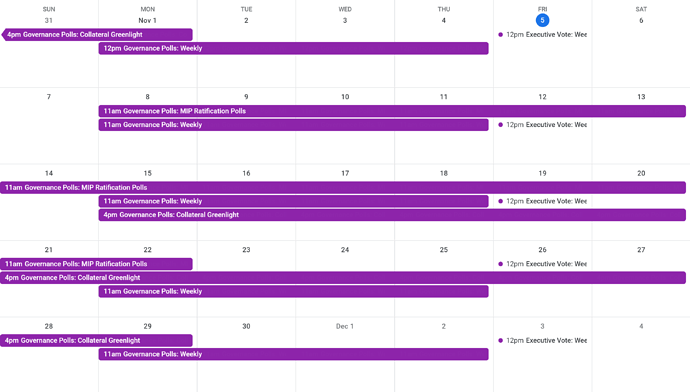 As we roll into November, there are a few things to look forward to.

There are Community Greenlight Polls for MD Irradiance LLC and Olympus DAO, which are active until November 15th.

The month of October contained many signal requests; some of them have not yet made it into executive voting, such as launching Nexo Institutional Vault and increasing maximum Delegate compensation to 144k Dai. They will be up for vote soon.

Regarding Delegation, @ultraschuppi arrives into the ring as a Recognized Delegate. Check out Meet Your Delegate #5 with UltraSchuppi. Look out for his addition to the Monthly Delegate Round-up for November.

The Clean Money initiative for MakerDAO received mixed outcomes; The Sagittarius Engine signal request did not pass. However, a sentiment poll for Clean Money did pass. For MakerDAO to continue on the best path forward, there will likely be more polls and votes within the upcoming months to help improve the next steps and objectives.

Finally, there has been much discussion regarding the MIP in RFC for offboarding the current facilitator of the Real World Finance Core Unit. Solutions and next steps are being made to continue with a best-decision approach for MakerDAO and its community. Keep an eye out for future posts on this discussion.

Disclaimer: This update is assembled by a group of contributing members in the MakerDAO community. This does not serve as financial advice or an inducement to vote in any specific way. This update is purely for information and communication purposes only.

This poll did not pass to support the following changes:

Abstain was most voted option, but it did pass.

This is correct, it did pass. Abstain votes should be ignored.

Oh wow, really? Thanks for the clarification. Will batch that up really quick.

The video version is now available on the MakerDAO Youtube channel for review: