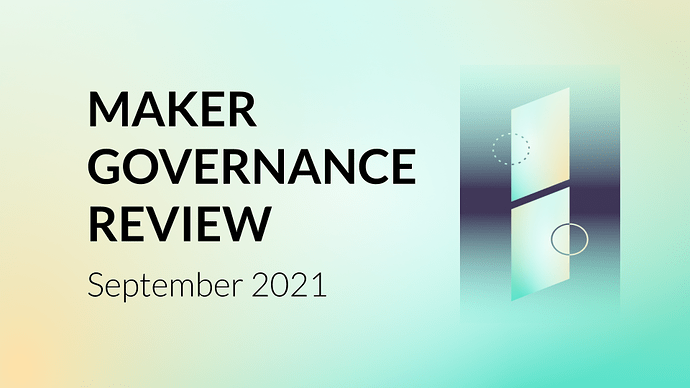 The month of September had no executive vote delays (thanks to delegates and voters!) and contained many updates for Governance. The DUX team released an updated version of the Governance Portal that includes additional features and matches information with the MCD Voting Tracker. Additionally, the DUX and Token Flow Insights teams have worked together to help redefine and further clarify the voting algorithm rules for determining each wallet’s correct MKR vote weight.

We are four months into delegation, and so far, there are seven public delegates and seven shadow delegates who collectively have been delegated over 74,000 MKR. Delegate profile details are now available on the MakerDAO delegate page! Additionally, the first Maker Debate Series call took place on September 14th, which focused on delegate compensation.

The Protocol Engineering Core Unit launched the long-awaited Dai Token Bridge on Arbitrum One. The bridge allows users to transfer Dai to and from the Arbitrum L2 network. Steps towards functional L2 governance controls are happening; September 24th’s executive vote included a number of L2 test actions. The actions test the configuration of L2 components, including the governance relay and L2 DAI. Once it is confirmed that Governance has control over all L2 systems, the Protocol Engineering Core Unit will manually deny its deployer addresses, meaning Governance will be the only authority retaining full control of the token bridges.

September’s ratification polls welcome four new Core Units: Collateral Engineering Services, Development & User Experience, StarkNet Engineering, and Strategic Happiness. As MakerDAO scales and the number of Core Units continues to grow, the GovComms and GovAlpha teams presented a new format for the Governance and Risk Calls to help redefine the purpose of the call. Beginning September 9th, the calls have followed the new format focusing on deeper discussions on high-priority issues and projects.

The month of August contained eight ratification polls, which all passed:

DssVest was implemented, and the following token streams were established:

View a detailed breakdown of the rate change proposal here published by the Parameter Proposal Group.

The Debt Ceiling Instant Access Module (DC-IAM) was activated for PSM-PAX-A with the following parameters:

New Vaults and Other Facilities

GUNIV2DAIUSDC1-A Vault was onboarded with parameters detailed in the poll.

KNC-A Vault was offboarded through a 2-step process:

USDT-A Vault was offboarded through a 2-step process:

The month of August had two Community Greenlight polls: 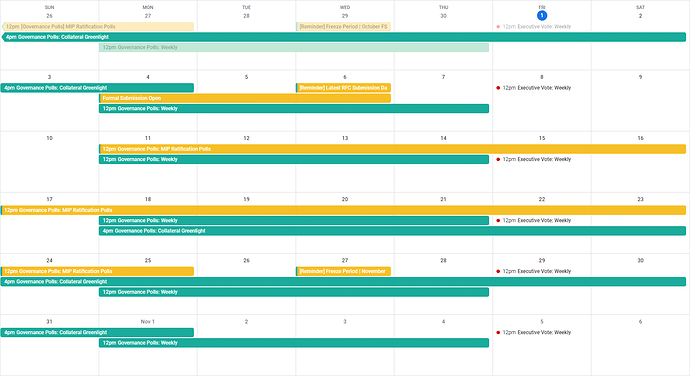 Here are some things to look forward to for October:

The DUX team recently presented their updates and future work on Governance, Risk, and Core Unit Launch Pod Calls. Look out for many new updates and integrations on the Governance Voting Portal and Delegate sites.

Although the Dai Token Bridge allows users to trade, lend, provide liquidity, and yield farm with Dai on the Arbitrum L2 network, there is no support for Maker Vaults. The recently passed executive vote transferred sole-authority over token bridges to Governance, which will allow upgrading the Gateway to enable Vaults, fast withdrawal schemes, and DAI minted on L2.

In September, offboarding low-tier Vaults was a heavily discussed topic and is now coming into action with the most recent active poll to offboard USDT Collateral Types. Expect more low-tier Vaults to be on Governance poll for offboarding in response to this recent signal request.

The Maker Foundation notified the community that it would be discontinuing Rocket.Chat. The community discussed and decided Discord is to become the next primary channel of communication. GovAlpha, Content-Production, and Tech-Ops are collaborating on a proposed layout for the channel implementation. GovComms is collecting Discord handles and other associated account information from DAO members, stakeholders, and anyone who wants to be added to the Discord prior to launch. The current goal is for the new Discord to go live on Monday, October 18th, two weeks before the October 31 deadline for shutting down Rocket.Chat.

Finally, the D3M is undergoing a final audit by the Risk Core Unit. Growth Core Unit is ready to launch D3M once the audit is complete, which tentatively looks to be mid-late October.