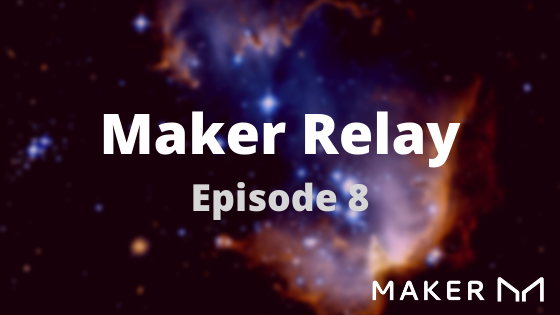 Hey everyone, thanks for checking out Maker Relay!

Whether you hold Maker (MKR) or DAI, own a vault, or want to get more involved in MakerDAO governance, this is your one-stop-shop for updates on the MakerDAO ecosystem.

Polls use instant run-off, so you can select multiple options and ranked-choices will be prioritized.

The Maker Improvement Proposal (MIPs) Framework provides a clear process for Maker governance to change the Protocol as needed.

Proposals that are in the Request-For-Comments phase include:

The proposed change lets Maker Governance control to some extent the amount of simultaneous auctions that can occur at once.

“According to http://makervaults.descipher.io/ the largest ETH-A vault has 37m Dai debt, second largest has 30m. If any of these 2 vaults were to be liquidated (they’re pretty safe right now) we’d see an immediate liquidity crunch, as keepers try to bid on an extremely large amount of auctions. I believe the risk to the system would be high, since in case of the first vault, 290,000 ETH would be auctioned, in up to 2900 different and simultaneous auctions.”

This update marks Week 10 of the trial of SourceCred trial. 2500 Dai were distributed in the preceding week and July’s payouts have been distributed.

SourceCred provides a system that allows users of the Forum to build credibility & create value through interactions.

That thread includes details about the algorithm being updated as well as the UI, actual numbers from the trial, and how to opt-in yourself!

Should Voting Costs Be Reimbursed?

Should the Maker Community Reimburse MKR Voters for the ETH Transaction Fees Incurred when Polling and Executive voting?

This week it will cost anywhere from $20 to $50 to Poll on the current nine (9) open polls. And perhaps this is the reason why we have had such a low, low, turnout. More than likely—it is.

Interest rates can’t get up and MKR holders aren’t being compensated at all for their crucial role in managing and backstopping the MakerDAO system." 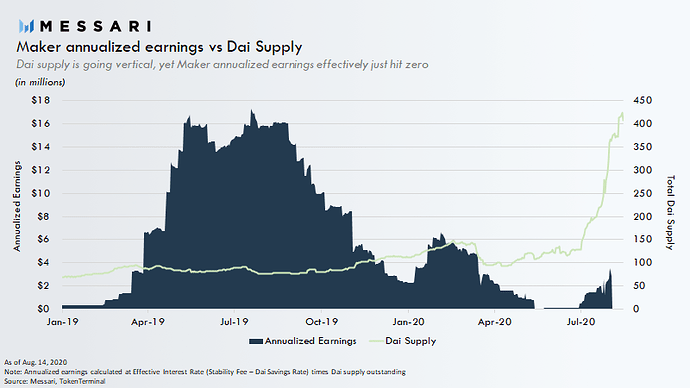 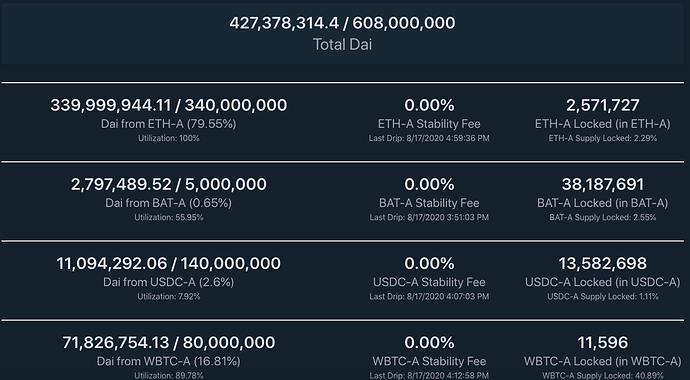 “There has always been speculation about the coin limit of Ethereum, and recently, it has been stimulated again with the release of a script by MakerDao developer Marc-André Dumas. The script in question projects the size of the issuance of the second largest cryptocurrency via capitalisation.”

A resource for all types of projects that involve Dai, and explanations of some of the interesting things that can/have been done with it.

“Every day, people all over the world derive value from generating Dai and, in doing so, provide value to the Maker ecosystem. The number of people that use Dai will only grow in the coming years, as more and more individuals, businesses, developers, and other parties grasp the advantages of decentralized crypto assets.”

Adding Real World Assets (“RWA”) as DAI collateral is a critical step for Maker to stabilize the peg... and in doing so, we change the world

“Real world assets as collateral is a natural progression and a complement to the existing DAI collateral. In many ways, it is an evolved symbiotic relationship, as both truly need the other, even as neither realizes yet.”

@seth is looking for feedback from any and all users in relation to a media inquiry. The community-led Governance Communications (GovComms) team was given a list of questions and the decision was made to bring some of these to the rest of the community.

I’ve criticised DAI early, scalability, and later with centralised collateral. But one thing I never criticised was the power of the community and belief @MakerDAO built. You cannot easily replicate this, and it’s critical to adoption, as a lot of new designs will soon realise.

Propose technical changes, poll, and vote in the Governance Portal

Learn more about the Maker protocol in our Documentation

We value your input! Post in the forum, take our survey, or join us in the Community-Development channel to let us know what you want to see.

Disclaimer: This update is assembled by a group of contributing members in the MakerDAO community. This does and should not serve as financial advice or an inducement to vote in any specific way. This update is purely for informative and for communications purposes only.

While the farmers have taken a break momentarily the incredible Dai supply growth has slowed for the time being. We have a ton of collateral greenlight polls this week and more in this week's Relay. forum.makerdao.com/t/maker-relay-… 1/1 https://t.co/0NHQ2JNWfI