I actually manage a fund so I’m already connected within the industry if that helps, this is now not even about the money anymore for me it’s about the total lack of respect for the people who have been affected some of which have already had financial difficulties in these challenging times, there are a few within MakerDAO that have helped like @MakerMan and a few others and I thank you all for your efforts but i think this needs to be expedited somehow and I’m on board to do whatever I can to help get us heard.

I’ve been asking this many times. In that vein I’ll try this telegram group for affected Vault owners/community members to join
https://t.me/joinchat/GVVDihyJDH_ZgXiEUYCkEQ

Second second. Is there any way to get the attention of the powers that be? Someone on this forum should have the contacts to make the case for professionals to clear this up? @rich.brown?

20200531_1716 (EST) I am at work but trying to slog though coding on the new data I have for ‘ALL Vaults’ during whatever time period. So very close to punching out the entire MCD vault analysis here before final vault analysis checks against what oasis reports. Then it will simply be a matter of punching out the entire MCD analysis over the Black Thursday time frame(s) and seeing what vaults come up outside of the liquidation analysis already done.

Compensation group getting back to finalizing a plan once we have a new analysis in hand. Hopefully within a week (max) provided no analysis or other hiccups we all will have something ready to hand off to governance.

I have zero issue with people kicking other cans here because at a minimum we are going to need an auditor to step up and do their own check on everything and no-one is warming up the auditor here.
Worst case I hand everything off to pro auditor groups to deal with all of this and free myself of this beast to return to more fun things to do.

Appreciate the kind words coming from a number of you. Thus far, this has been largely a thankless task for those involved, and I know they are finding it difficult to balance time spent on this against other commitments to work and family, so thank you!

With regards to the queries about the Foundation, the issue is complicated by the lawsuit. I imagine they want to avoid anything that could appear to be an admission of responsibility and potentially used against them in the future. This is what happens when a company gets a lawsuit called against them.

Just start the compensation for the vaults where you are certain!

I’ve seen this sentiment appear a number of times. Put simply, the working group is concerned (justifiably in my opinion) that governance is not going to approve multiple rounds of compensation. Give this concern, it seems better to ensure that all the compensation is done at once. While this is probably frustrating for those of you who are in the ‘straightforward’ group, I suspect you would have a different opinion if you were one of the edge-cases.

I agree we are just not moving fast enough

The use of ‘we’ in this statement particularly annoyed me (in addition to the general tone), as with one exception, I am not aware of any Vault Holders meaningfully helping to resolve the issue. If anyone wants to help, MakerMan stated the following:

One thing I know we will need. Someone or group that can produce another independent dataset that can then audit my work.

I’m also seeing the reoccurring theme of Vault Holders being ‘strung along’ and that the intention is to never compensate anyone. It is naturally difficult to judge what MKR Token Holders as a whole are feeling, but the previous vote showed that token holders were in favour of compensation. Since then, MakerMan has been working on an analysis, and others have been contributing time where they can.

To be quite honest, all those involved want to be done with the whole issue just as much as you do. If we didn’t intend to make compensation a reality, we wouldn’t be making the effort. If we try to half-ass a solution, then either it will leave some uncompensated, or it will fail to pass the required governance vote. I genuinely believe that this process - slow as it has been to get started - is the best chance of Vault Holders seeing any compensation.

@LongForWisdom my Vaults being liquidated to zero annoyed me too.

Thanks @LongForWisdom. I think the main frustration is that the you guys working on this (and we are grateful) aren’t getting enough support from the whoever controls on the money. I don’t know that me as an amateur vault holder & non-coder will be of much help really.
If it’s important enough to solve & everyone wants to get there (including the foundation) then it’s weird that there’s no funds available to solve it professionally? The cost should be immaterial in context. It’s crazy that @MakerMan should be putting up his own money along with his time.
I don’t know that funding an investigation to get to the facts would amount to an admission of guilt. It’s not going away, so should be in the interest of the foundation to squash it soonest.

My comments are not directed at the troopers doing the work here… it’s always been against the decision makers not pulling their weight.

They don’t give any F’s at all

20200602_2253 Based on problems with vault data, the compensation group is going back to original compensation model and working up the compensation plan the working group can all agree to. The hope is we will have this ready within a week to present for forum polling/discussion before moving it to an on-chain poll and governance votes.

Sorry for the delay folks. I think it was necessary to explore this even though it dead ended not so quickly. It gave us a better perspective that hopefully will help us move forward with determination and ultimately successful resolution for everyone. I know this has been hard on all of us and the process tortouse like. I think my own biggest dissappointment is the longish time frame here. But if we put this into perspective against what courts do with these things should be significantly faster even if it probably won’t satisfy anyone fully. We all are learning how to apply new decentralized models and unfortunately are finding it requires more people, working longer to get the same thing done as a centralized model.

I am hoping to have a better update by the weekend and no later than early next week.

Be safe, sane, and secure folks.

EDIT: One last thing a few of you have written me offering help and I really appreciate this and would take people up on it but what we really needed was a developer who could pull on-chain data and then be able to cross check issues as they cropped up. It literally took me a week to get an answer on missing collateral. A few weeks just to get the on-chain data for my first report. It looks like good crypto devs are hard to find and even harder to hang on to. Right now I think the working group is pretty settled with our movement forward and data from my liquidation and compensation report on hand. We are still going to need an auditor to check over everything and no-one in the group has even moved forward on that step other than to have it ‘as a step’ in the compensation plan.

If a professional on-chain analytics group wants to assist here please feel free to contact me [email protected] or hit up @rich.brown or @LongForWisdom as contacts on this because we know we will need an auditor here at some point once governance decides the conditions for compensation to simply check my work which will be a vault by vault compensation breakdown over the ETH BT liquidation class. 320-960 vaults more or less depending on conditions and time frames.

BTW: A number of you fall outside this class - I am keeping notes on all of you I just don’t know exactly how we are going to deal with the first class of compensation claims, much less the class that falls outside the first. The compensation group is hammering out details of this as I post this update.

The above poll affirmed governance intention to move forward on the issue positively (otherwise this would have just dropped) and put up the funds to generate the report I subsequently created. Original compensation report/analysi is basically in my liquidation report. So if you want to look at the first compensation model look there. 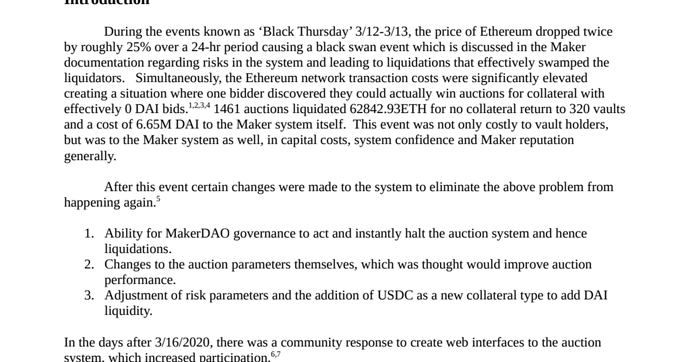 I kept thinking these should be broken out into Two different reports but really they need to stick together. The liquidation report gives context to the compensation analysis/report.

20200608_1310 (EST) Update: Final changes made to Compensation Plan document are currently being reviewed by team for finalizatio to present to governance. Everyone in Compensation team busy with their own life events. The goal here is we finally settle on a plan we can all agree to within a day or two before presenting the plan formally to the community.

Thanks MakerMan, really appreciate all your work on this

hi there,
any updates on this?

Updates?! It is very hard to stay patient…

It is hard for everybody. Without people like MakerMan nobody would care and you’d have zero chance to see your collateral again

Greatly appreciate @MakerMan’s time on this!!

And you are who ?

It’s my understanding Makerman is working on this

I’m working with MakerMan as part of the compensation group, and wanted to provide a status update.

Currently, we are making final formatting revisions to the compensation plan document, and will be posting it to the forum for review soon. After that, we will be presenting the plan on the Thursday governance call (either this week or next depending on how quickly we finish final revisions).

Thanks everyone for your patience!