MakerDAO’s understanding of vault liquidation behavior is crucial to long-term economic resilience of its system of smart contracts. While a tail event, there is significant solvency risk involved in case of too much bad debt being liquidated at the same time during large price drops of ilk’s underlying collateral assets. While a lot of effort has been already invested across different teams to maximize robustness of the liquidation system, there is an external element of vault activity which can also aid in preventing insolvency from ever happening.
@Risk-Core-Unit team decided to look into this dynamic to derive useful insights as a part of a series of analyses on vault behavior.

We begin by exploring the high-level vault behavior, both looking at how many vaults are being protected over time and also how vault owners protect their vaults.
As expected, vaults tend to have the most liquidation protection activity during large drops in collateral asset prices. Besides that, we also look at how successful vaults are at protecting their borrowed funds, split over various dimensions.

We extend the research by comparing vault liquidation activity during two days of major drops in collateral asset prices: March 12th 2020 (Black Thursday) and May 19th 2021. Both days include the most data points to analyze liquidation activity in isolation and also in comparison. 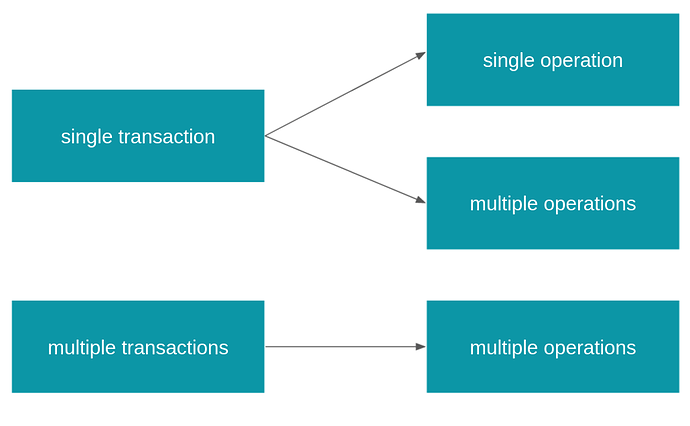 Only the third action type (WITHDRAW|PAYBACK) can include two separate operations which can be executed in either 1 or 2 separate transactions/blocks. To interact with the vault, the vault owner could execute the action via their own bot, use a Maker vault management UI or through one of the specialized liquidation protection services (DeFi Saver, InstaDapp, etc.)

For actions performed in two separate blocks, we filter out only those that were executed during the same OSM price to minimize identified false positives.

Important to mention is that our detection methodology is not a ground truth for every liquidation protection action. It’s a heuristic to classify patterns that we’re interested in while trying to minimize both false positives and false negatives. Setting the 1.2 multiplier is a typical precision/recall trade-off problem where we can’t increase one without decreasing the other.

When looking at the liquidation protection success rate, we define an action as successful if the vault wasn’t liquidated within 24 hours after action execution.

Overall, we identified around 38000 liquidation protection actions performed by around 5000 unique vaults. 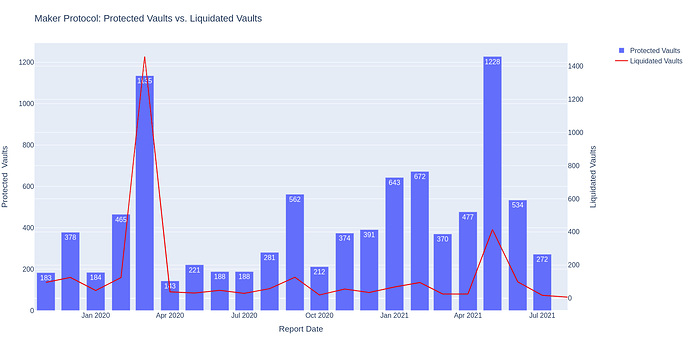 We can also aggregate monthly overview on debt size instead of the number of vaults. As expected there is a strong relationship between protected and liquidated amounts. There is a stronger influence of DAI supply growth which causes the recent months to be larger both in protected and liquidated amounts.
A possible extended metric is to look at the ratio between liquidated debt size and protected debt size. As it can be derived from the chart, this has been relatively constant since a major increase in the month of Black Thursday. 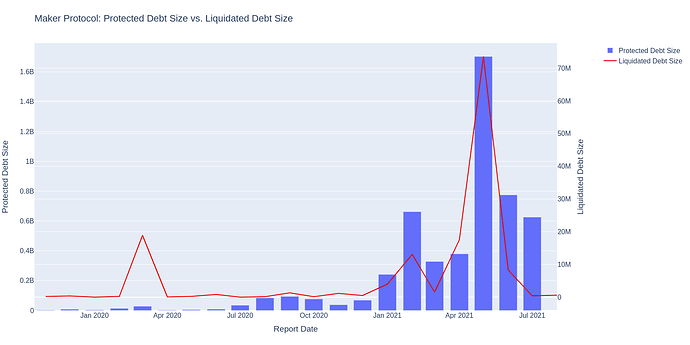 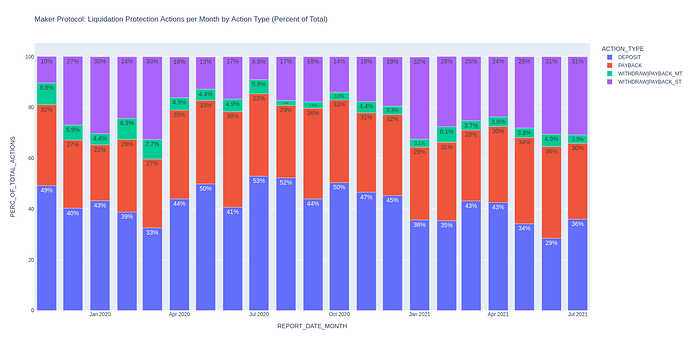 When looking at protected debt size across different action types, we can see that PAYBACK tends to protect the highest average debt size. Meanwhile, the other three action types have a similar average value. Considering the impact of outliers, this indicates that larger vaults (whales) tend to use the PAYBACK action type more when entering the specified danger zone. That’s likely because it’s common for whale activity to include farming with DAI on other venues, which means that they have enough DAI at hand for repayment in case of an unsafe drop in vault collateralization ratio.

When we look at days with the most protected debt size we can see that all days happened in the last few months. This makes sense considering a rapidly growing DAI supply where, at a given amount of liquidation protection activity, later dates are more likely to protect larger debt sizes.

While ETH-A contributed to more than 90% of total action in the first months after MCD launch, the number currently stands at around 50% which mirrors its current DAI collateralization share. 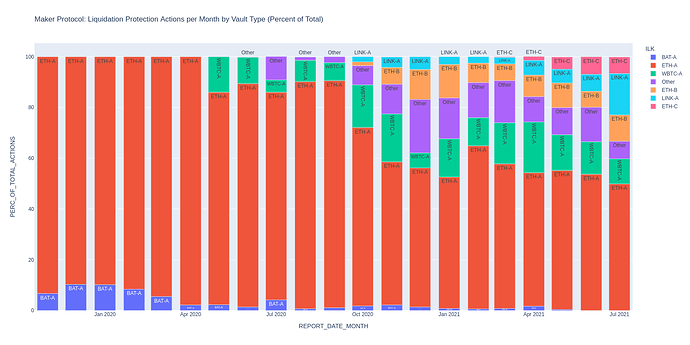 Overall success rate of all liquidation protection actions is 95%. That means that 1 in 20 actions doesn’t save the vault from being liquidated within 24 hours after action execution.
There is no difference when looking at success rate across different action types so we decided not to include the chart in the analysis. Meanwhile, when looking at distribution by vault type, we can see that while there is a minor difference in their success rate, actions on Uniswap LP vault types tend to be the most successful (99%+) and actions on ETH-A tend to be the least successful (90%). Both make sense, the former because of lower asset volatility and the latter because only ETH-A and BAT-A vault types were available during Black Thursday market crash which had the highest number of liquidations (unsuccessful protection actions).

In the comparison of two downfall events, Black Thursday to May 19th, we can see that the latter had about twice as many active vaults at the time. An active vault is defined as a vault that has had a vault operation within 3 months before the chosen date and more than 100 DAI being borrowed at the time of the executed action.

Even with that, there were both more protected vaults on Black Thursday and also the vaults were being more actively protected (average protection actions per protected vault).

That also impacted a lower percentage of daily active protecting vaults during the May 19th event. On the other hand, the liquidation protection success rate was considerably higher in the price crash this year which sheds a positive light on the improved robustness of the system since Black Thursday.

One important factor to consider is that during Black Thursday, there was no flash loan feature available yet which increased the number of actions.

Splitting number of liquidation protection actions by action type shows us that while there was an overall higher vault protection activity during Black Thursday, there is the largest difference in the amount of executed WITHDRAW|PAYBACK_ST and WITHDRAW|PAYBACK_MT actions (3.5 BT actions for every M19 action).
Meanwhile, the difference is lower for DEPOSIT and PAYBACK action types (1.7 and 1.15 actions during BT for every 1 action during M19, respectively).

Most increases were smaller, with 60% of them being lower than 10%. For the sake of clear visualization, we filtered out all increases that more than doubled their collateralization ratio (increase > 100% which constitute about 2% of total actions).

We can see that during Black Thursday, vault owners boosted their vault collateralization ratios on average lower than they did on May 19th.

This indicates that they performed more actions with lower amounts relative to the May 19th tail event. 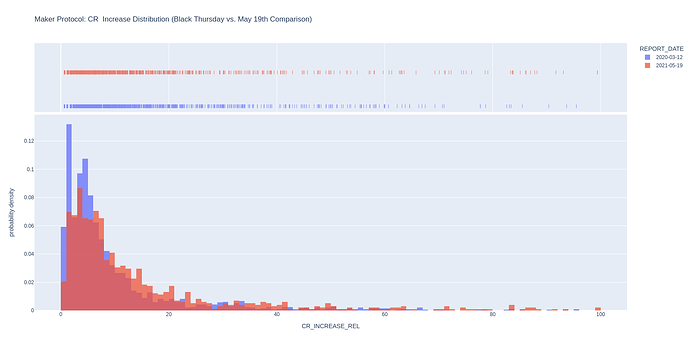 There are a couple of key takeaways from our analysis.

When looking at action type distribution normalized by debt size, we can see that whales tend to use PAYBACK actions more relative to other action types. The best explanation seems to be that they are just more likely to have DAI on hand as they’re extending their activity across other protocols in the ecosystem.

When comparing Black Thursday with May 19th price drop, it was somewhat surprising to us that there was much more liquidation protection activity during the former event. This can be partially explained by lower average collateralization increases during Black Thursday (more actions with lower increases). Meanwhile, a higher success rate during the latter event is to be expected.

Next steps for us are to automate metrics that would make sense to monitor on a continuous basis and potentially add a vault-level risk score. This means moving towards quantifying potential liquidated debt also by taking into account vault behavior. This could include historical liquidation protection activity, DAI capital availability score and other factors.

Finally, we would like to thank Token Flow (@tmierzwa, @piotr.klis and the team) for giving us access to well modeled data that enabled this analysis.

I still have to make heads or tails of data in graphs. Presenting this data numerically helps me dramatically because then I can twist/turn it however I want in my own spreadsheet.

There are other things I am interested in here that I have talked about in the past.

Analysis of if given the auction prices being fetched a particular vault could have had more collateral saved (or the CR brought above the LR) if the liquidation were to happen in stages. Or a better question. Based on the price of auction and collateral returned, what is the minimum amount of collateral that needed to be auctioned to bring the vault back to neutral CR>=LR.

Other points. I have mentioned for a long time it is one of my goals to change the system to reduce liquidations generally. Maker should steward better over people’s hard earned collateral. THis is better for users, better for the Maker system, and better for DeFI as it will mean less collateral trying to find capital.

One idea here is whether during high stress times it makes sense to adjust the liquidation fee to save vaults from coming under the gun. Hence an analysis of how much less liquidations would come to market if a 1,3,5,10% adjustment in the Liquidation Fee as being applied to the LR to vault were to occur is also useful.

Thanks for the analysis and I look forward to analysis leading to changes to the system so more collateral is preserved.

One thing from my own analysis on this. Paying down debt is the most efficient way to protect a vault. It gives the biggest bang for the buck vs. withdraw collateral, or depositing collateral. $1000 DAI in is better then $1000 collateral for obvious CR/LR reasons.

Thank you for your feedback, @MakerMan. Much appreciated.

In general we decided to use the data currently available and continue by integrating more external sources to make improvements on the critical points of the analysis. At the moment we only have data on all (successful) vault operations which limits our scope of answerable research questions.

Regarding your main points:

I will give more thought into simulation analysis ideas that you shared (the impact of multi-stage liquidation process on returned collateral + its extended version, the impact of liquidation fee adjustment during high stress times on liquidations).

Thank you for taking a look at this - and the new analytical data coming out!

My own example analysis was posted over a year ago here when Maker was beginning to think about changing the liquidation process.

Folks a quick note regarding an some thoughts on the liquidation system that led to an idea. A quick example that illustrates the idea: Lets say OSM is at $200USD/ETH (just for easy calculation) and a new vault owner opens with 300ETH a vault for 20K DAI. So their CR on inception is 300%. All fine and dandy. Now OSM drops to $100 putting them at the liquidation point. So now they come under liquidation gun here. The system as it is currently designed liquidates everything returning an…