Legal Disclaimer: This communication is provided for information purposes only. The views expressed here are those of the individual Maker Foundation (“Maker”) personnel quoted or who present said materials and are not the views of Maker or its affiliates. This communication has been prepared based upon information, including market prices, data and other information, from sources believed to be reliable, but Maker has not independently verified such information and makes no representations about the enduring accuracy of the information or its appropriateness for a given situation. This content is provided for informational purposes only, and should not be relied upon as legal, business, investment, or tax advice. You should consult your own advisers as to those matters. References to any digital assets and the use of finance-related terminology are for illustrative purposes only , and do not constitute any recommendation for any action or an offer to provide investment advisory services. This content is not directed at nor intended for use by the MakerDAO community (“MakerDAO”), and may not under any circumstances be relied upon when making a decision to purchase any other digital asset referenced herein. The digital assets referenced herein currently face an uncertain regulatory landscape in not only the United States but also in many foreign jurisdictions, including but not limited to the UK, European Union, Singapore, Korea, Japan and China. The legal and regulatory risks inherent in referenced digital assets are not the subject of this content. For guidance regarding the possibility of said risks, one should consult with his or her own appropriate legal and/or regulatory counsel. Charts and graphs provided within are for informational purposes solely and should not be relied upon when making any decision. The content speaks only as of the date indicated. Any projections, estimates, forecasts, targets, prospects, and/or opinions expressed in these materials are subject to change without notice and may differ or be contrary to opinions expressed by others.

Decentraland is a protocol for a virtual world where users can create virtual content, purchase virtual real estate, and engage in other simulation-based activities. The protocol has two main tokens; an ERC-20 token called MANA and a non-fungible ERC-721 token called LAND. MANA is a currency for Decentraland-related assets such as real estate and vanity items inside their simulated world known as the Metaverse. MANA is also a voting token in their DAO (described below). LAND tokens are another component and represent real estate inside the game. After several years in development, Decentraland launched their platform in February 2020, where they also started the process of transferring admin controls over to the DAO.

In addition to being used as a voting token and a currency for Decentraland assets, MANA has a burn function. The three largest token burning events in the past have been two LAND auctions and the establishment of the DAO. Additionally, MANA token holders can vote to adjust various parameters such as the burn fee applied for each trade of Decentraland non-fungible tokens (NFTs). Other governance actions include the whitelisting of NFTs inside the protocol.

The MANA token can be used for voting in a DAO that was established along with the launch of the Metaverse in Feb 2020. As part of this DAO token holders can vote on future LAND auctions, whitelist NFTs, and more. The DAO is supported by the Security Advisory Board (SAB), which acts as a guarantor for contract security. The SAB was established for dark bug fixes in smart contracts. Initially the SAB has five members picked by the Decentraland team that can upgrade the LAND and Estate contracts, requiring at least three signatures with no votes against. The members of the SAB can be changed by the DAO.

The Metaverse is hosted on a network of independent nodes called Catalyst. Initially, host nodes were selected amongst reputable community members, but the DAO has the authority to alter the list. Catalyst ensures constant uptime of the Metaverse.

Daily active addresses have typically been highly correlated with the price action of MANA. There was initially a lot of activity during the 2017/18 speculation around its ICO, before going through a relatively inactive period in the post-ICO era. Recently, as a result of the Metaverse launch in Feb 2020, there has been a resurgence in daily active addresses, suggesting that the product launch has garnered traction.

New address growth has been in sync with daily active addresses, implying that a significant amount of network activity is that of new users. The launch of the Metaverse appears to have attracted many new accounts.

Onchain transaction volume resembles other network metrics. Activity has mainly been clustered around the ICO era and the recent launch of the Metaverse. Increased transaction volume may suggest an organic increase in demand for the product (or is merely related to the price increase). 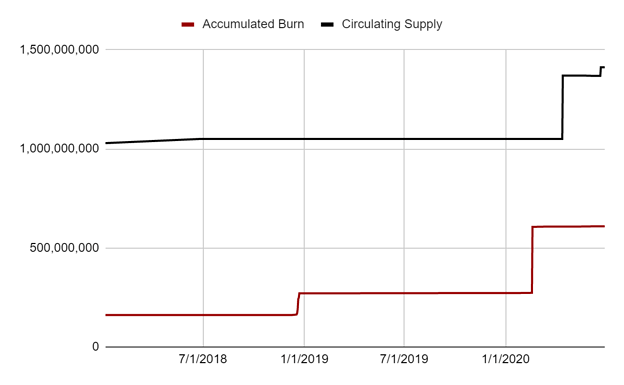 MANA is listed on the majority of reputable exchanges due to it having been one of the more popular tokens during the ICO era. Approximately 530m MANA or 37% of the circulating supply is currently being held by exchanges, of which 55% is on Binance. Strangely, trading volumes on exchanges do not reflect deposits proportionately; the vast majority of real trading volume occurs on Binance, while other exchanges like Bittrex have extremely low trading volumes. This may suggest that many users who accumulated MANA in the past are essentially using the exchange as a custodial service, and likely exhibit very low interest in the platform or the virtual world itself. 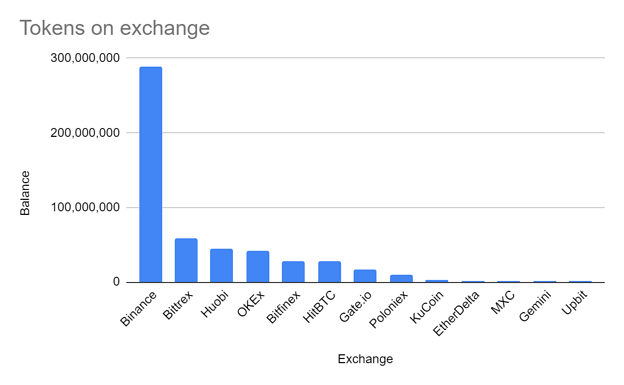 In the seniority distribution we can see that token holders accumulated approximately 25% of the supply around the ICO and immediate exchange listings. Fifteen percent was acquired in the post-ICO era and 50% in recent months. The address distribution between these three groups is fairly equal, making it difficult to determine if accumulation was retail or institutional driven (typically recent large acquisitions amongst few addresses would imply institutional interest). Note that this metric can be significantly skewed by exchanges moving token deposits between their custody accounts. 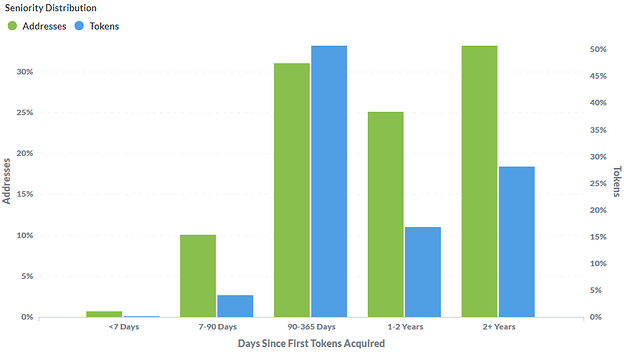 Trading activity on custodial exchanges is atypical and does not reflect proportional deposits on respective exchanges. The large majority of trading activity occurs on Binance, suggesting that tokens on exchanges like Bittrex, Bitfinex and Poloniex have been sitting idle since the ICO era. We have decided to omit OKEx trading volume due to reported volume being significantly higher than their deposits would otherwise suggest (compared to similar exchanges such as Huobi). Trading volumes are insignificant on platforms other than Binance and Coinbase. 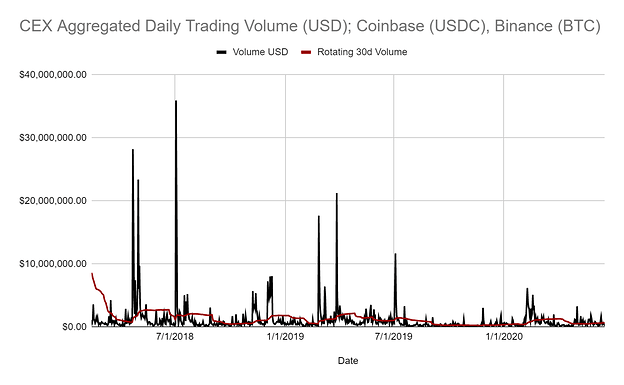 As seen below, Coinbase listed MANA much later than Binance, who has been consistently leading MANA trading volume market share. 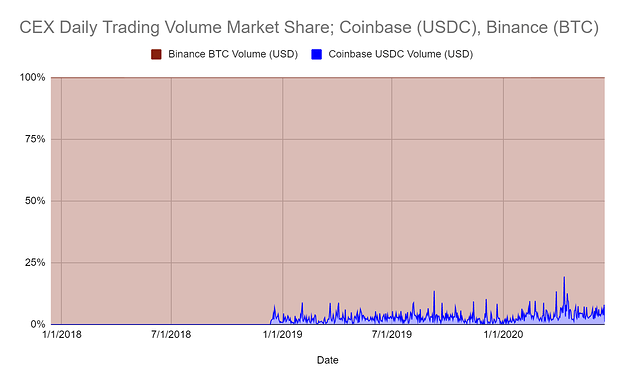 Trading activity on non-custodial exchanges is very low and suggests that the Decentraland community is not primarily interested in financial services. Kyber has shown the most activity in recent weeks. Shortly after Balancer launched, we noticed an ENJ, MANA and ETH market which, at the time, didn’t have any recorded trading volume and currently does not exist anymore.

MANA has a significantly higher count of negative daily returns compared to ether, especially at ranges between -20% and -40%. This suggests MANA vaults are expected to be liquidated more often than those collateralized with ether under the same circumstances and user behaviour. 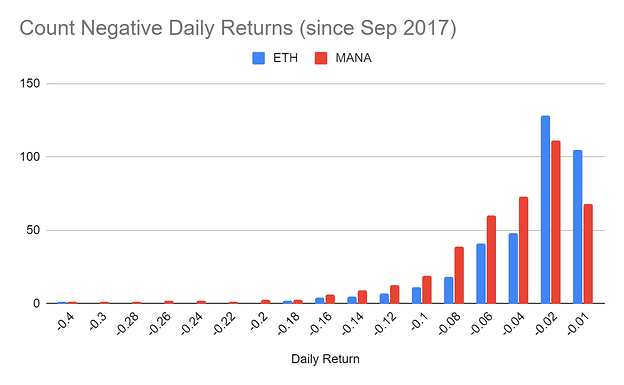 The only leverage or lending platform that currently supports MANA tokens is Aave, with ~$163k supplied and ~$16k borrowed. There is no sign of significant demand for MANA on lending platforms, which is to be expected given that MANA is not in the financial sector and that the user base is probably focused on other sectors like gaming and VR.

Below we can see the trading dynamics for LAND on the secondary market. The LAND market experienced increased demand during the second LAND auction in Dec 2018. A second notable increase in demand occurred in Feb 2020 with the launch of the Metaverse, but quickly contracted towards its mean value. Over time, neither the number of trades nor LAND value sustained an increase in activity.

We use the model described from the governance call here: a credit risk model that estimates the loss distribution of a portfolio of MANA Vaults. Risk parameters are estimated from this hypothetical loss distribution. Inputs to the model are derived from trading data along with stressed input parameters. A link to our model specification with inputs and outputs can be found here. Auction parameters have been selected to mirror those for ETH, with the exception of the lot size that has been normalized to a ~$20,000 amount

Great summary, in the case of LEND, a suggested increase of the DC was subject to oracle diversification, which metrics would you consider in order to increase the DC of MANA?