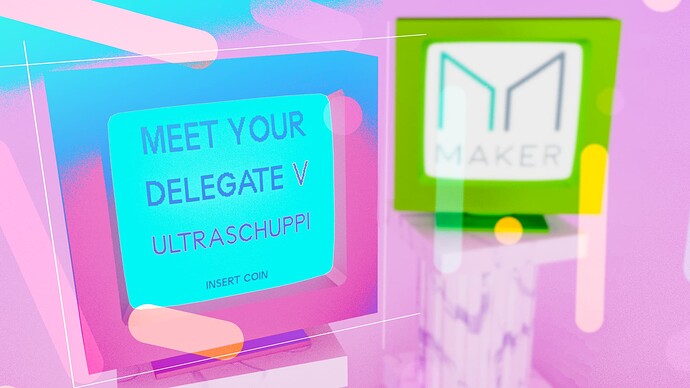 Welcome the [announcement for the] fifth episode of Meet Your Delegate, where MKR holders and the broader community get to know their delegates

For this episode we will have delegate candidate @ultraschuppi presenting their platform and holding an AMA session.

@prose11 will be doing the hosting.

Mark it on your Google Calendar!

Shoutout to @blimpa for the template

Q1: No surprises. Sorry about that. We had it a little more organized on the RocketChat. I realized we don’t have the delegates extension anymore at Discord. One of the questions is about delegate compensation. What are your thoughts about how delegates should be compensated? Does that affect how you’ll be acting as a delegate going forward?

Q3: Do you anticipate not wanting to be delegated more than an X amount of MKR? For example? Some people don’t want more than 10 or 20 MKR. It’s a big responsibility. Do you have a certain number that you ideally would like delegated to us recognize the delegate?

Q4: Have you looked at what it costs voting on polls in the past and executive in terms of fees? This isn’t getting cheaper. Why should everybody who’s not doing anything get a free ride while the people who work a lot get nothing? Yeah, I’ve worked in a lot of. I’ve also donated my time, and co-ops, and intentional communities. A theme in all of these communities is a lot of people, or I should say, a fair number of people doing 90% of the work, while the other 70% does nothing. I think that’s unfair, so compensation based on action is reasonable. I want to encourage you to think about that, and if you want hard questions, I will have to leave; I’ll probably have to listen to this later. Here’s a couple, the PSM 10, TNT out going to zero. I want to hear what your views are on that. What’s going on with Feb, and how was that approached? We didn’t even have a poll on this, and there was a MIP thrown up that we didn’t even get a chance to discuss. Before a MIP was thrown out, I think that was very fast, very hard.

Q5: It might be interesting to hear your thoughts about the challenges between bringing on Core Units and potentially off-boarding them. How do we, as a DAO, with this new structure? Now we’ve got delegates, another player of power in the system. I’m curious if you have thoughts in the system on how our process can be improved?

Q6: I just wanted to circle back real quick on the process related to offboarding facilitators. In this situation, we should have some sort of process and structure. In the US, that will employ the generally like, as a business matures, the leadership gets more experience. Formal plans lead to someone being fired; you just don’t fire someone out of the blue with no notice. It’s just not a good way to run a business. It’s not a good way to build the company culture. You want to give someone a chance if they’re not doing something or you’re not performing up to the standards to make amends and get to the standards. Businesses call them performance improvement plans. I don’t see why as a DAO, we couldn’t implement something similar and avoid drama. It’s unproductive and distracting from the overall mission of the DAO. I want to get your thoughts on that.

This full call is available on the MakerDAO Youtube channel for review: 11:14 - Payton Rose: Do you have feelings about how delegates should be compensated? Does it affect how you will be acting as a delegate going forward?

13:36 - Payton Rose: What is the reflection in your delegate platform of growth over profits? Can you talk about that and maybe mix in your greater vision for MakerDAO?

15:32 - David Utrobin: Do you anticipate not wanting to be delegated more than x amount of MKR, for example? Do you have a certain number of MKR that you would like delegated to you as a recognized delegate

16:51 - Makerman: I heard you on delegate compensation. Why should everybody who is not doing anything get a free ride while people doing a lot of work get nothing? That is unfair. Compensation based on action is reasonable. What are your views on the PSM 10, TNT out going to zero? What is going on with Seb? What are your thoughts on how that was approached? Also, one of my biggest problems with delegates and political systems is the conflict of interest in voting. Can you talk about this?

25:16 - Payton Rose: Can we hear your thoughts about the challenges between bringing on CUs and off-boarding them? We, as a DAO, with this new structure, have got delegates, another player of power in the system. Do you know how our process can be improved?

28:11 - Mark: I wanted to circle back on the process as it relates to off-boarding facilitators. We should have some process and structure. As the business matures and the leadership becomes more experienced, there are formal plans for someone to get fired. We could implement something similar to what businesses call performance improvement plans and avoid drama. I would like to hear your thoughts on that.