This proposal formally introduces a Governance Cycle. The Governance Cycle provides a predictable framework for Maker Governance decisions. Furthermore, it provides participants (MKR holders) with a monthly overview of the decisions that are to be made, allowing participation despite time constraints.

The goal of the standardized monthly governance cycle is to provide advance notification and high predictability of governance activities in order to enable MKR holders to stay informed on relevant topics and participate in voting despite being time-constrained.

Proposals submitted must follow the guidelines defined in MIP0.

The Default Inclusion Threshold can be modified with subproposals. The subproposals will follow the logic below:

1st Thursday of the month:

Is inadequacy deemed by rough consensus in the governance meeting? Or by the governance facilitator? In the diagram it states GF, but the component text does not specify.

Personally I would like to hear more about the rationale for having multiple parties “approve” MIPs as they come through. First (correct me if I am wrong) the MIP Editor approves a MIP by merging the authors Pull Request. The editor is looking strictly for adherence to the standards defined in MIP0? I dont necessarily agree with that set up, since I dont think we need to be so restrictive, but it makes sense if the main goal is highly ordered proposals.

Second, either the GF(s) or some consensus in a Thursday meeting determines what is adequate. Why is this necessary and whats the rationale for the departure from “governance happens on the forums”? Historically we don’t make any decisions in the governance call.

In general this seems to be moving in a direction of giving the GF more power. I am curious about the reasoning behind that. Rich has stated many times that he does think his role (as it currently stands to be fair) should be making decisions.

Why do we need an on chain inclusion poll in general? Couldn’t that function be served by the governance poll?

I also would like to point out for everyone that in this governance cycle there is no place for forum polls. All voting is done by MKR holders either in the inclusion, gov or executive votes. From what I am seeing, technically the only place for input by random people is the RFC stage before formal submission. I need to look at MIP0 again to see how feedback should be integrated.

Do all MIPs need to pass with an on-chain poll and executive vote? In the past, we’ve regarded on-chain polls as sufficient when the proposal is just a social contract and has no technical implications.

The structural vote, this is what it’s based on. The gouvernance etc. It’s all about vote.

The editor is looking strictly for adherence to the standards defined in MIP0?

I don’t think so, it will make it more attractive and put the emphasis on, but even without text component, i think it’s way better like this.

I also think you are more than right on many points @Mitote , about the gouvernance i must say, i did read a lot of post and i am not on either side, but this forum is all about the #governance

And @rich.brown is now doing PR on github ?? I don’t want to be rude or seem or seem to be, but this is what i understand. It’s out of context a little but in concordance to this, how can you get involved in the gouvernance and in the foundation at the same time, should not be ?>

I’ve been thinking a bit about how to make this more robust. I was also aiming for less complicated, but I’m not sure I achieved that goal. Here’s what I came up with:

Path 1: For MIPs/SP that do not contain on-chain technical changes to the Maker Protocol.

Path 2: For MIPs/SP that do contain on-chain technical changes to the Maker Protocol.

Create a single yes/no poll for each MIP and SP that lasts for three weeks. In order to qualify for inclusion when this poll ends, the ‘yes’ votes must outnumber the ‘no’ votes by an amount of MKR defined as one third of the total MKR locked in DSChief at the time the poll ends. For votes to be counted in these polls, the voting MKR must be locked in DSChief a the time the poll ends (not in the hot/cold wallets.)

Path 2: For MIPs/SP that do contain on-chain technical changes to the Maker Protocol.

Create an executive vote with an expiration of one week that includes all the ‘executive-code’ requiring changes that passed the inclusion poll as defined for path 2 above.

Also, on an entirely separate point. How does this governance cycle affect the current weekly cycle we have been following up until now?

Maybe with mkrgov.science you could figure it out, but seems like a pain to see what mkr left the chief before 1 month and subtracting that on whatever MIP polls they voted on. Can that be built into the polls themselves? idk

Admittedly it’s more confusing than the current polls though.

mhm yea I think I like their idea for a minimum threshold (just acting as a predetermined set of NO votes) for the polls. I don’t think it really solves any actual issues, but is a neat idea which is a little simpler than what your proposing.

The difficulty is that any minimum threshold would have to be updated as more or less MKR starts voting. Tying it to the MKR in the Chief means that it doesn’t have to be adjusted manually. It’s slightly more complicated but there is less maintenance overhead.

Why would it have to be adjusted often or at all? I thought the point was to weed out MIPs that no MKR holders really cared about, so a static set of NO votes would accomplish that regardless of the general flux of voting MKR.

Because a threshold of 10k MKR is different where there is 20k MKR regularly voting than to where there is 500k MKR regularly voting. I think the point is more about making sure that whatever is included in the bundled poll is as likely to pass as possible. Assuming that a large portion of MKR is only paying attention in the last week of the cycle, I think the threshold would need to increase based on the total participation.

Might be I’m totally wrong about it though. At this stage I’m having trouble getting my head around it all.

I asked this question privately about how the monthly governance cycle affects the now normal weekly one and got no answer.

My question was whether this cadence was meant to supercede normal business cadence or if it ONLY applied to MIP processing.

@MakerMan For now this is just a proposal. Drastics change do not hurt i guess.

There is so much question here and there on the forum right now but i like it, i mean.
We can’t agree on everything but we should wait a little and give them some time and see.

I can’t link something major for now that would really affects the normal weekly. So this is something that will work.

There are people who use a CLI to interact with these contracts so one would have to look at that generally.

Above is definitely more complicated than existing polling.

When I am looking at changes I ask a few questions.

What goal is the change being made trying to accomplish?
Is there a measurable metric for this goal?
If the above are both yes then the last question is whether there is another method to achieve the same goal that is simpler.

@MakerMan there is no technical details for now, it’s just a mockup.

Adding here a question posted in CC today that deserves its own thread.

I was wondering why we are using fixed MKR amounts as triggers for system decisions
The above 3000 MKR threshold as well as the 50000 MKR for ES.

I spoke about this as a question in conference call today in relation to MIP3 3000 MKR threshold for a governance action decision choice. I had wondered why there were fixed numbers of MKR chosen for things (50000 MKR to ES) given the whole MKR burn financial reward structure which MKR outstanding by design was expected to change. It begged the question why 5% of outstanding wasn’t the ES number required or some other variation vs. using a fixed number that would reflect a changing % of MKR ow… 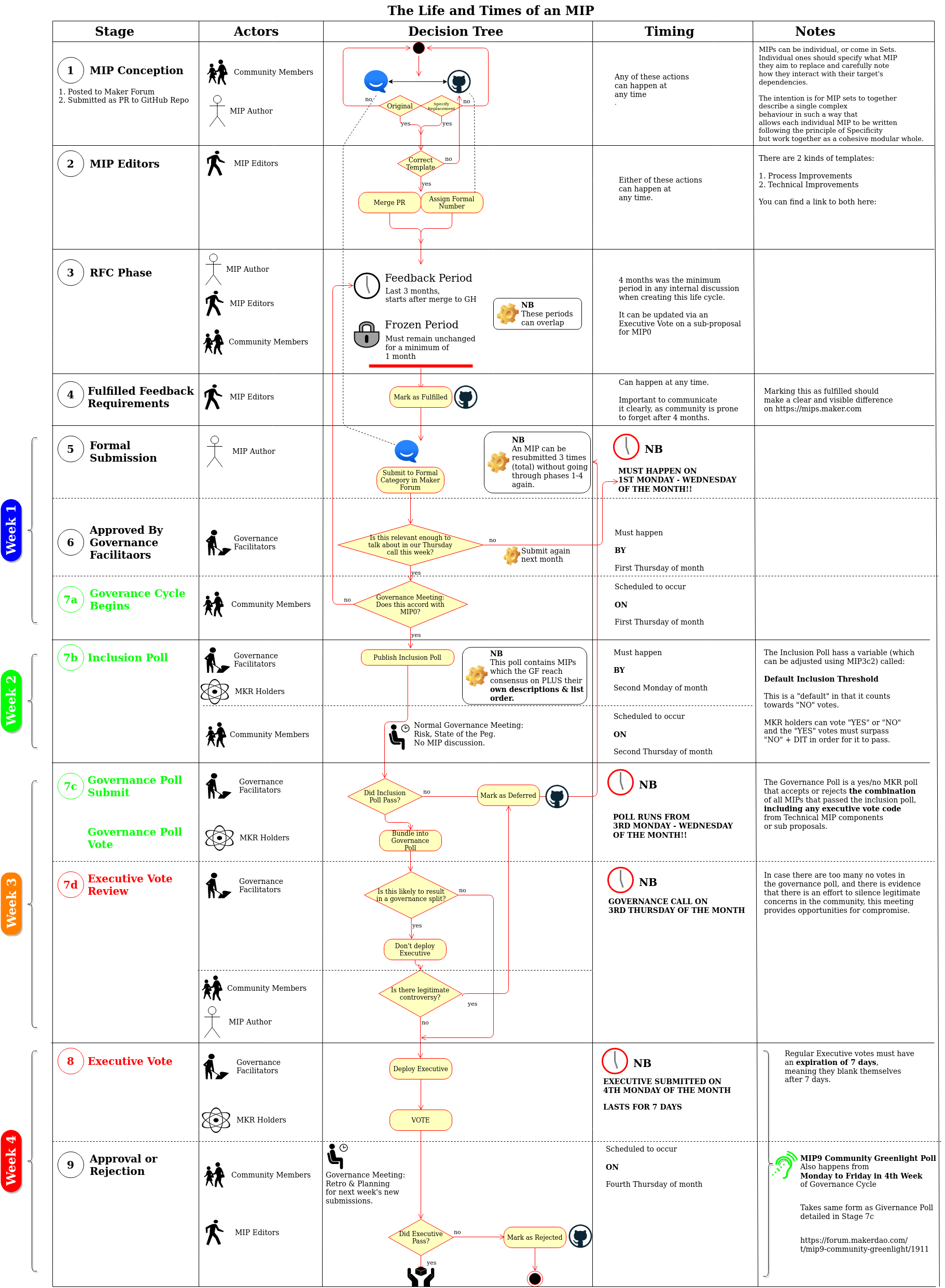 @andytudhope This is incredible! Do you mind if I make some edits/play around with it? Credit will still go to you