This proposal define a new Peg Stability Module which converts USDC to DAI and DAI to USDC, during the conversion it lends and farm the gem via lender token and
leverage the position using cdai using the same technique to farm it too.

The join use the generic ‘maker join’ interface. It takes as input a collateral, lends and farm it behind the scene to compound,
on the output the join redeems the position and return the collateral.

This PSM will have 2 urns one cDai and one cUsdc which are both leverage in compound, but the maker position for this PSM is still on uscd and dai.

MIP35c7: Licensing States the license under which the proposal and code are distributed.

Currently, the usdc token inside the PSM is inefficient and needs to be diversified.
By using cDai and cUsdc and farm them we will bring more diversification.
The farming bring more risk as the token is locked as collateral, but it is also motivated by a better outcome.

The PSM Mixed Exposure is articulated around 3 main components:

We reuse the MIP32 component and plug the new farming join on it.

harvest calls harvest() from both join. It can be processed by anyone.

Additional specification:
The same level of debt is maintained for both positions (the leverage urn and the gem urn). 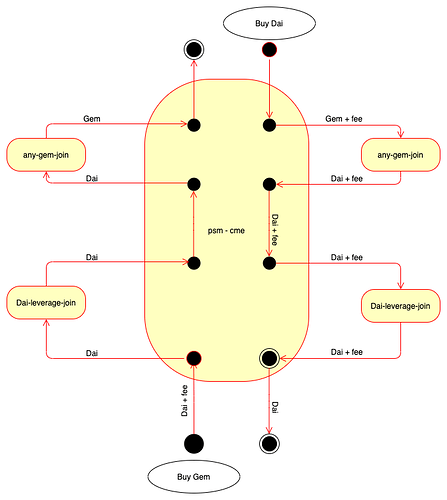 The Farming Join is a new Join.

It uses the same join interface as MIP32. A classic join interface with an additional method harvest() behind an allowlist - the PSM -.
The join has 7 parameters :

The collateral is register against the vat and allow borrowing on it exactly like a normal collateral, but the farming join lends, and farm the collateral with compound.
The join is an auth-join type accessible only by allow list.

harvest() method will first check if we have a position superior at 100.1% in compound of the underlying collateral to allow a exit from the join in good order. Please Note, Farming can bring a risk of losing some part of the main collateral. 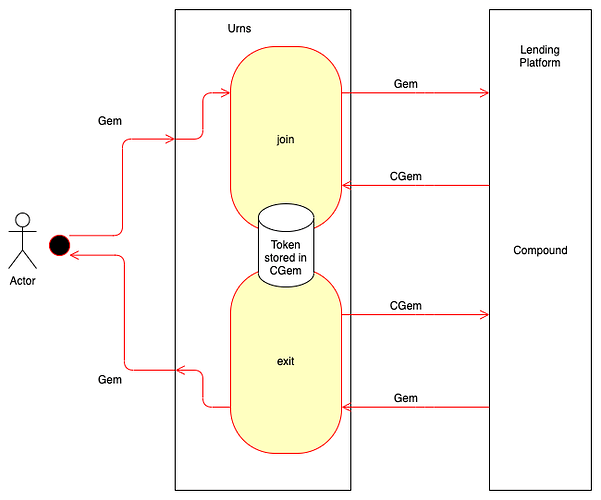 We reuse the MIP32 component
This delegator has 4 methods:

Errors or security vulnerabilities in the Compound system could result in the underlying USDC deposits to be lost or stolen.

In addition to the technical risk inherent to Compound, the adapter implementation itself is non-trivial and could increase the attack/error surface.

Due to the design of multi-collateral DAI, worst-case losses should be limited to the collateral deposited in the adapter, and the debt ceiling should be set with this in mind.

There is security consideration about the code itself, compound tokens.
In this implementation as we use leverage on compound, the c-token can be sized.
By using leverage on compound we also expose ourself to a lost of the assert which is currently compensated by COMP token.

Another risk: uniswap interaction, but limited to the extra bonus.