The Oracle Core Unit is requesting an annual budget of $5M.

The Oracle Core Unit (OCU) is responsible for developing and administrating the Oracle Protocol. Oracles are a critical component of securing the Maker Protocol to ensure positions are sufficiently collateralized. The OCU is essential to ensure the Oracles can adapt rapidly to scale the Maker Protocol in a responsible manner. A key focus of the OCU is to monetize the Oracle Protocol and build out a business around it. This enables the DAO to subsidize its own Oracle expenditures, and ultimately turn Oracles from a cost-center into a profit-generating arm of MakerDAO. Real World Assets (RWA) in particular, are a highly promising vertical the business side of the Oracle is targeting.

On behalf of the Oracles Core Unit, I’m proposing the following budget to deliver on our mandate. This includes, but is not limited to:

Oracles are a critical component of the Maker Protocol’s security, through which failure could potentially allow printing of unbacked Dai, and liquidation of all vaults. Many DeFi hacks can be traced back to a faulty Oracle. The budget presented below represents the resources needed to employ the exceptional talent to take on this critical responsibility.

This budget was designed with the philosophy that it’s better to ask for too much budget and not spend it, than ask for too little, and need it. At this stage of growth for the Maker Protocol, being blocked by a lack of capital would be a careless and unnecesary mistake. There is a limited time-window to execute on the opportunities at hand before the market becomes too crowded with well-capitalized competitors. Given the amount of time it will take to hire the right people and set up internal processes, it is highly unlikely that the Oracle Core Unit will spend even half of the proposed budget in its first year. Subsequent budget requests will have much better calibration with actual expenses incurred.

The following considerations have been taken into account when building the proposed budget:

It should be noted that the gas costs for operating Oracles are not included in this budget and will be requested in a later subproposal. These costs scale linearly with the gas-price of the Ethereum Network and are significant, variable, and difficult to model.

The yearly budget request for the Oracles Core Unit is $5m. This equates to a $419k monthly expense to support the team mandate.

This budget secures a team of 15.5 full-time employees as well as covers all operational costs listed below. 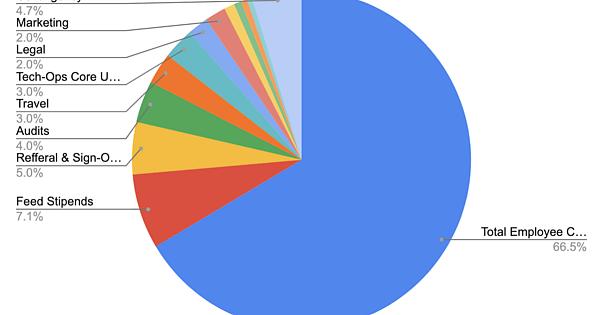 Salaries
The current team has 4 full-time developers, 1 Team Lead, and 1 Facilitator. The team is seeking to grow this by 9.5 members to 15.5 total to meet the evergrowing needs of the Maker Protocol.

Total Employee Cost
The total cost of an employee includes salary, all benefits (including healthcare), and taxes. This has been calculated by scaling salaries by 30%. This premium is likely an overestimation, and the realized cost is expected to be lower. That being said, paying salaries to a a global remote team in a multitide of jurisdictions can be quite expensive without the proper legal infrastructure in place.

Feed Stipends
All Feeds are compensated with a Feed Stipend of 1000 Dai per month. There are currently 26 total Feeds; 12 Light Feeds, and 14 Dark Feeds. We expect to continue onboarding new Feeds in the coming year to meet the growing security requirements of the Maker Protocol as it scales.

Recruiting/Referall/Sign-On Bonus
Recruiters are going to be critical for discovering talent, and their commission for successful hires is often high, especially for more senior roles. We also want to have flexibility with offering significant sign-on bonuses to elite cant-live-without candidates. Keep in mind many of these are one-time costs.

Travel
Conferences and team offsites have been critical in the Maker Foundation’s history of fostering interpersonal relationships and generating trust. These are vital qualities in a companies culture that improve collaboration, productivity, and retention.

Conferences in particular also serve a multitude of purposes. Employees are educated about the bleeding-edge technologies in the industry, and can apply that knowledge within the Oracle Core Unit. They also are a way for the Oracle Core Unit to present seminars, giving visability to potential customers and attracting new talent. Additionally, they serve as hotspots which can be used to connect with potential clients in a much more personal (read effective) manner.

Audits
As the Oracle Protocol evolves, audits are an indispensible part of the QA process. In many cases, multiples audits may be required for a single release due to the sensitive role that Oracles play in securing the Maker Protocol. Depending on the code size and complexity, as well as the prestige of the auditor, audits can range from $10,000 to $50,000. During bull markets especially, auditors are booked months in advance and charge heavy premiums for fast-tracking. The Oracle Core Unit will always prioritize the security of the Maker Protocol over agility.

Tech-Ops Core Unit - Production Coverage
The Maker Foundation Tech-Ops team has in the past provided excellent coverage in monitoring production systems 24/7 365 across a multitude of timezones. This would be prohibitively expensive to staff within the Oracle Core Unit, and is best outsourced to the Tech-Ops Core Unit which will provide round the clock monitoring to a handful of Core Units running production services on behalf of the Maker Protocol.

Marketing
The marketing budget is for building a brand around the Oracle Protocol.
As we won’t have an in-house designer initially, some of the budget will be used to outsource design work. Conference sponsorships, ad campaigns with select partners, and user incentives also fall under this umbrella.

Deployment Costs (Gas)
Gas costs have continued to ride as demand for interacting on the Ethereum network grows. In particular, the plethora of AMMs which become arbitraged and front-run by bots en-masse is a systemic problem that does not look to let up anytime soon. As such we expect extreme gas-costs for smart-contract deployments, the majority of which are for Oracles related to collateral-onboarding for the Maker Protocol. This budget should cover deployment and configuration for roughly 35 collateral types.

Tools/Services/Devices
New team members will need to be provided with laptops for the duration of their employment. Licenses for essential productivity tools like Clubhouse

Contingency
As with any new indeavor, especially in an industry innovating as quickly as ours, there are many unknowns when it comes to estimating budget requirements, as well as unexpected costs that arise from time-to-time. The contigency represents 5% of the total budget and is there to act as a safety buffer.

To ensure 3 months of continuous operation in the event of emergency shutdown or protocol issues, the Oracle Core Unit is requesting an upfront lump-sum of $800K to sit in a protocol owned multisig.

The lump sum is the equivalent of 3 months of budgeted salaries and essential team expenses.

If normal protocol operation is not possible due to emergency shutdown or other protocol failure, these funds will be used to ensure employment resources get the system back up and functional.

At the conclusion of the year, the lump sum will remain in the multisig for the following year and may be increased at that point in time due to team growth or the need for an increased runway.

The Oracle Core Unit is proposing to apply a linear interpolation model to utilize salary to calculate the amount of MKR each individual will vest. This model has been proposed by the SES Core Unit with minor modifications. These modifications include a higher floor for intermediate and junior contributors as well as a longer vesting period to reward loyal contributors and mitigate brain-drain.

*Note that this estimation is based on all 15.5 FTEs joining the Oracle Core Unit on day 1. There are currently, only 6 FTEs (potentially 5) working for the Maker Foundation that are joining the Oracle Core Unit which significantly reduces the actual amount of MKR expended for Oracle Core Unit vesting. While we will try to begin hiring as soon as possible, we’re absolutely prioritizing to find the highest caliber candidates to fill vacant positions and will take our time accordingly. In the meantime the trailing 6 month average MKR price should rise which will reduce the amount of MKR awarded to new hires.

Approved!!! Including the 800K needed in case of emergency! Let’s goooooooooo

Love the detail Nik! I have a ton of question about Oracles but I’ll save those for the SP12 thread. Only have a few questions regarding the budget:

What is exactly is the service a feed provides? Is this just a feed for market/price data or? I have next to no knowledge of how oracles work as you may have surmised from my previous Chainlink questions in RC, ELI5

Regarding number 2, that is a significant challenge for the DAO as a whole and one that @SebVentures and myself are working on providing visibility to. It’s very difficult to quantify what should be invested without having a budget or forecast for the protocol in place.

Each Feed is constantly sourcing prices of assets from different exchanges according to the Data Model that Maker Governance has ratified for each asset. The Feed then publishes a signed message containing the asset pair, price, and timestamp to a p2p network. So now you have this big pool of signed prices floating around on this network. A relayer comes along, grabs a bunch of these messages (enough to reach quorum) and pushes them to our Oracle smart contract. The smart contract verifies the signatures and then sets the median as the Oracle price. You can kind of think of the Feeds like a multi-sig of trusted actors that Maker Governance has appointed. The more Feeds you have, the more difficult it gets to launch an Oracle attack. Hence why instead of the $312,000 needed for 26 Feeds, we budgeted for $360,000 so we can add 4 more.

Given the amount of time it will take to hire the right people and set up internal processes, it is highly unlikely that the Oracle Core Unit will spend even half of the proposed budget in its first year.

This is one of the very few cases where I’d happy to see money be spent fast!

This is an amazing proposal. I feel this CU will bring enormous value to MakerDAO is the medium-long term (i.e., much more than what it brought already in the past).

The actual proposal isn’t out yet though

the budget proposal. I am waiting for the content proposal too!