Going by the critical nature of the work done by the Sustainable Ecosystem Scaling Core Unit, sufficient funds need to be provisioned to guarantee the success of the Maker ecosystem in the long run. 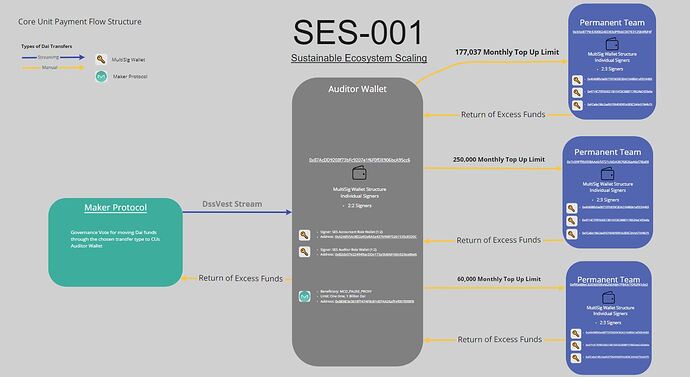 The following multi-sigs are involved:

Within the first 5 days of each month, SES will submit a Monthly Budget Statement to the signers of the Auditors Wallet with the following sections:

The Monthly Budget Statements can be found in this git repository on Github.

Final Transaction According to MIP40c3-SP26

No additional governance transactions are needed to enable the transition from MIP40c3-SP31 to the new MIP40c3-SP55, other than putting the DssVest stream in place that is defined further down.

The last top-up transaction from the protocol to the Auditor Wallet according to MIP40c3-SP31 is expected to happen throughout the month of January, after acceptance of the December budget statement by the auditors.

To enable this payment flow, a modification in the configuration of the existing SES Auditor Wallet will be required. These changes will occur within the first month of the executive vote passing.

See our Team Spreadsheet for more details about the included FTEs.

The limit for the Incubation Program was estimated based on some team configuration scenarios that we want to support, as outlined in the table below. The requested limit is the maximum amount needed for any of these scenarios.

The details for the Grants Program are still being worked out. To avoid updating the budget MIP soon, a budget is included that will be sufficient to get the program up and running. Once the program is active, more detailed estimates will be included in the Monthly Budget Statement.

This budget update MIP is submitted by SES as part of our effort to help standardizing budget implementations, and to pave the way for further automation in terms of payments, reporting and auditing.

No changes were made to the total budget cap.

Do you think you could just highlight the reason each of these were done in a sentence or two to provide rationale behind each change (where it makes sense to do so)? Overall the implementation looks superior to the previous but it helps provide context and illustrates SES’ thinking.

standardizing budget implementations, and to pave the way for further automation

Wondering if you folks at SES have taken a look a Coinshift (formerly known as multisafe—Gnosis compatible) to automate this complex process?

Do you think you could just highlight the reason each of these were done in a sentence or two to provide rationale behind each change (where it makes sense to do so)? Overall the implementation looks superior to the previous but it helps provide context and illustrates SES’ thinking.

Yes, sure. It’s a good question:

Automates payments from the Maker Protocol to the Auditor Wallet by putting a DssVest stream in place.

This is mainly to remove any auditing workload from GovAlpha’s plate (and the other CUs that need to put the executive spells for payments in place.)

In our previous model, the payment depended on the balance of the auditor wallet and GovAlpha had to either calculate themselves or just trust us with the number; this doesn’t scale up. The manual work also introduces potential errors, and the budget cap can be breached if the manual check fails.

With DssVest, it’s certain that no more than the budget cap will be sent to the auditor wallet. From the protocol’s pov, it’s also more transparent to have the DssVest streams in place that stream the budget cap (see makerburn.com )

Reconfiguration of the Auditor Wallet to a nested multi-sig, modifying signers.

This is a preparation to professionalize the roles of accountants and (finance) auditors of core units. The accountant role does the bulk of the work that’s so time-consuming: running all the checks on the monthly budget statement. The auditor reviews this output as a double-check: both roles need to sign. The auditor can also advise when complications arise or judgement calls need to be made.

By having nested role multisigs with 1:N quorum, the accountant and auditor roles can be executed by teams rather than single individuals. This increases scalability and redundancy. For example payments won’t get blocked because someone is on vacation.

(Today, SES is taking up both the accountant and auditor role of the core units we’re advising, even if the signers are already different individuals. We’d like to see this done by independent CUs in the future. For ourselves, we’ll look for another team to do the auditor check as a start.)

Configure Maker Protocol as Beneficiary on the Auditor Wallet.

Using this configuration, the Maker Protocol can unilaterally withdraw the funds from the Auditor Wallet (with an executive vote.) This is good for multiple reasons:

Adjustments and additions to the Monthly Top-up Cycle.

These are modifications to keep the Monthly Top-up Cycle consistent with the other changes in the list.

Introduces DssBlow as a method of returning funds to the protocol.

The down-side of using DssVest, is that the entire budget cap is streamed, while the core unit will consistently use significantly less than the total cap. This difference can be especially large in the case of SES because the expenses for our incubation program and grants program may vary significantly from month to month.

Instead of relying on the CU to return the funds at the end of the year after they’ve accumulated unused budget all the time, the auditors will require a more exact, 3-month forecast (typically quite a bit lower than the budget cap) from the CU. This is done before funds are moved from the Auditor Wallet to the Operational Wallets, and the Operational Wallets will be topped up only with the difference between their current balance and the forecast.

So, this provides the CU with more exact funding than when the budget cap is used. And, any budget that still surpasses a buffer of 2 months budget cap in the Auditor Wallet (after the transfer was made to the Operational Wallet), will be returned immediately by the auditor to the protocol.

This applies a budget expiry of one year. After one year, a new budget MIP needs to be submitted. This further reduces governance overhead.

Minor changes in the budget categories for better consistency with other Core Units.

In order to support DAO-wide summaries of the CU budget statements, budget categories (line items) need to be consistent. For example: if one CU has a “Travel” line item and an “Events” line item while another lumps the two together, summarizing becomes difficult.

There’s still more work to be done here. But we’re already trying to apply the same naming convention and grouping when the opportunity arises.

Good timing too: @Retro will talk more about our transparency and quality control framework for core units later today on the SES Weekly Status Update: The Art of Core Unit Budgetting. Check it out :).

Wondering if you folks at SES have taken a look a Coinshift (formerly known as multisafe—Gnosis compatible) to automate this complex process?

We are talking to a few teams building DeFi finance / accounting / treasury apps.

Coinshift I wasn’t aware of. Thanks for the tip, we’ll put them on the list :).

We’re formally submitting this MIP for the January cycle.