Want to receive Multi-chain Dai-lights in your email? Sign up on Substack! 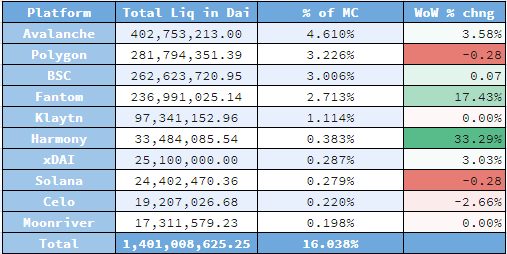 We’ve spent recent weeks tracking the growth of Avalanche and Fantom, but the dust has settled and AVAX came out on top. So, after a brief rundown of the latest AVAX and FTM happenings, we’ll move into this week’s theme: layers.

While the competition stalled out, AVAX’s TVL has climbed to $11 billion. The network now houses over 400 million Dai or over 4.6% of the total supply.

Fantom’s lived a monetary rollercoaster since the launch of the Geist AMM, and the swings haven’t slowed. This week saw around 30 million Dai return to the network, adding up to a cool 231 million Dai or 2.71% of the total supply.

Harmony aims to be a player in the future scalability of the Ethereum base-layer through its low-cost, sharded proof-of-stake network, though some implementations have come slower than expected.

That said, it’s been picking up steam due in large part to the gamified DEX, DeFi Kingdoms. Despite offering only two Dai LPs, the chain’s managed to lock in around 33 million Dai, or just over 0.38% of the total supply.

The majority is held in the Euphoria and Viperswap protocols, though around 40.2% is still floating in wallets, apparently waiting for the right farm.

Polkadot, like Avalanche and Cosmos, aims to build a platform upon which any number of blockchains can be built.

Currently, that number is capped at 100 parachains, so to divvy up their digital land Polkadot is holding auctions allowing users to stake their DOT in support of their preferred project.

Moonriver was the first auction winner and aims to run atop the Moonbeam parachain as its “permanent canary chain”, through which code is stress-tested before being shipped to Moonbeam.

Here’s a look at the parachain’s current landscape:

Though its primary use case is stress testing, its users have access to earlier launches than chains intended for battle-tested code. And degens rejoiced.

A little over 17 million Dai has been bridged to the parachain or around 0.2% of the total supply.

A flurry of speculation surrounding Loopring saw it’s price march to its ATH, but it’s not the only layer-2 making headway:

At the time of writing, the Optimism network still only houses a handful of platforms, but has continued to grow to the tune of nearly 47% in the last two weeks.

And last, but certainly not least, let’s take a peek into Arbitrum.

Just under 19.5 million Dai has been bridged to the layer-2 solution, representing a 9% decrease in circulating Dai over the last two weeks. But the total value locked in all tokens paints the picture very differently.

Around 2.34 billion in locked value lives on the Arbitrum network, while Optimism hosts just over 345 million.

Have anything you’d like to see added to these breakdowns? Leave a message in the comments or DM me, @seth, or @JerryAG. Thanks for reading!

Wow, it makes me very happy when my opinion is taken into account, I really didn’t know that there is even more DAI in Klaytn.

The parabolic growth of harmony left me more than shocked, I was buying those coins from 0.02$. Total madness and to see DAI there, makes me want to investigate and see what can be done there.