The last on-chain poll on Lower Stablecoin Stability Fees - November 16, 2020 ended with no consensus and no clear winner (UI on this link still doesn’t report correctly). This means stablecoin fees are still set at 4% and will cause part of stablecoin vaults to reach 100% collateralization ratio on 19th December 2020.

As mentioned, stablecoin vault will reach 100% CR on 19th of December and at that time we should have 0% fees implemented based on the first Stable Coin Action Plan vote outcome mentioned above. Since we might have only 2 more executives votes left until the end of year (11th December and 18th December), we might want to disable fees already on 11th December, especially if we consider it will take at least three days to implement them due to the GSM delay.

Why I personally also think it makes sense to set stablecoin fees to 0% before the 18th December executive vote is the following. Below is a graph with estimated Collateralization Ratios on all stablecoin vaults on 14th of December (this is 3 days after the proposed 11th December vote due to 3 day GSM delay and assuming we can hopefully have a passing vote on the 11th). 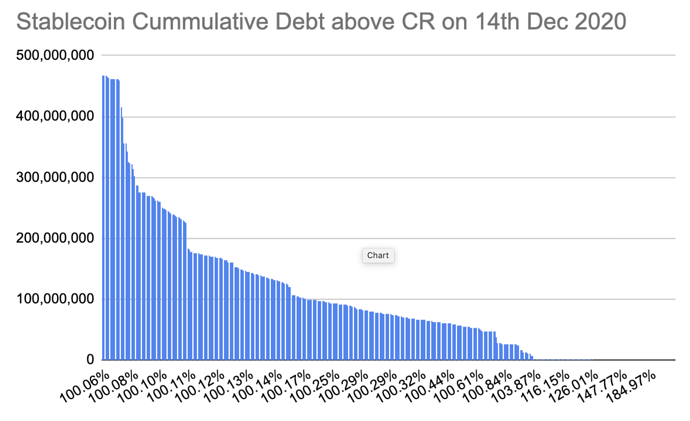 If we implement PSM in the near future with a tin parameter set at 0.1% (based on on-chain poll), around 249m of stablecoin vault debt will have CR above 100.1%, which means they should be able to unwind with a small profit. This means Maker is finally able to collect large amounts of stablecoin accrued fees, if of course those vault owners return and see the small profit opportunity.

It is also quite possible large amounts of vaults are abandoned and the profit opportunity is too small. Also, they might speculate on a much lower DAI price when they perform closing of the vault. Note however, that disabling fees 1 week earlier represents opportunity lost revenue of about 300.000 DAI for Maker.

Another thing in favour of having a vote on 11th instead of 18th of December is that some vaults could already be underwater after 18th December vote is effective due to 3 day GSM delay.

With that in mind I am proposing an on-chain poll to set stability fees on stablecoin vaults (USDC-A, PAX-A and TUSD-A) to 0% in the December 11th executive vote. This time the only two options will be to reduce fees to 0% or no change.

Sounds good to me. Lets do it!

I don’t agree with having only 2 options. I suggest repeating the last poll as I’m generally opposed to Yes/No polls. The MKR holders should always have multiple choices. I’ll vote for the highest rate to get rid of the USDC collateral faster.

It’s sad that we consider centralized stablecoins a last resort for keeping the peg.

I’m for 0% as well. I think it is best to keep them all above 100%. Even if we don’t “lose” anything by bleeding the non-realized profit into the surplus buffer, it avoids the oversimplified headline of “DAI is going under!1!”

Another benefit I’d like to add is that shutting fees to 0% early will avoid most of the risks associated with liquidating these vaults because over half of them should move into the PSM. I have yet to see a firm plan on how liquidation would happen, and I would rather not risk the chaos of having to liquidate 400M of anything, even if it is USDC.

I prefer to think of this as realizing over 3.5M in gains from arbitrage profit. Some people see the glass as 10% empty, others see it as 90% full.

Some disclosure: I am one of the largest stablecoin vault holders, and will be claiming part of that 300k. I was extremely careful with how I opened these positions throughout the past 3 months. If I am not going to see any profit, then I really don’t see how anyone could. I did my best to help the peg, and I feel like I have at least earned something with these. If fees are set to 0% on the 14th as planned, then I will be able to realize around 0.0870% net profit after gas by closing my vaults that are above 100.10% into the PSM. If they are not set to 0, then I will be in the red by the time the PSM is implemented on December 21. Not that me making a profit matters to this vote at all. I guess what I’m getting at is, if these vaults were not created for their owners to profit with, then what were they created for?

I guess what I’m getting at is, if these vaults were not created for their owners to profit with, then what were they created for?

To serve the will of their Maker overlords

Liquidation should be easy with psm.
It will max at 1.001 + gas fees using the dutch auction we need to set the auction increase at 0.0001 percent and probably increase the lot size.

Liquidation should be easy with psm.

Never make assumptions when it comes to auctions. Too risky.

More importantly, MKR holders will likely make more by shutting off fees in the December 11 executive instead of liquidating all of them in 2021. Lets run some scenarios:

Less auction risk, more MKR burn, and no undercollateralized news headline; this really is a no brainer. Vote 0%.

There is absolutely no way that MKR holder will make more by shutting off fees.

You can turn it how you want with all maths you want, there is absolutely no way.

If you are not happy with the dutch auction. Just transfer all usdc which need to be liquidated into the psm by governance at 1 usdc for one dai.

Topic is reopened in case people want to discuss the on-going poll.