DAI borrow rates at Compound and Aave have been very volatile over the last month and ended at a level between 2% and 3% after including farming rewards on supplied collateral and borrowed DAI. Aave has recently decreased farming rewards by 30% but we don’t expect this to affect DAI rates significantly as the reward distribution between supplied and borrowed DAI changed from 50:50 ratio to 33:66. While rates at two largest Maker competitors are on average in line with current ETH-A rate, note that the rate volatility on these secondary lenders platforms is very high, implying that additional larger borrow amounts could not be sustained at these low rates at Aave and Compound as easily.

This was also one of the main reasons why we thought a smaller increase in ETH-A rate should be sustained by the large borrowers. According to the last study performed, most of the recent debt increase on ETH-A was performed by two entities who represent already two thirds of ETH-A debt exposure.

Risk premiums have remained at similar levels over the last months, except for some smaller assets that have seen outflow of liquidity from Sushiswap lately - TVL dropped by more than 1bn in the last 2 weeks, potentially due to different allocation of Sushi liquidity mining rewards. Assets that are being affected are mostly tokens that are currently being offboarded at Maker. YFI liquidity dropped significantly on Sushiswap, but 25m out of 31m YFI-A debt is represented by Yearn treasury and YFI vault strategy, which is normally treated as a safe and well managed position.

WBTC vaults still present a threat at current exposure due to potentially long WBTC redemption cycle issues, but after knowing the largest two borrowers are two large and well capitalized centralized lenders, we feel a bit more relaxed about the state of WBTC vault risk. Additionally the upcoming safer and cheaper WBTC-C vault should offload some of these risks.

The calculated ETH-B risk premium is an outlier currently and has a high value because of the large amount of recently newly opened vaults that the risk model by default treats as medium or high risk, since we don’t have any behavioural inputs to use. 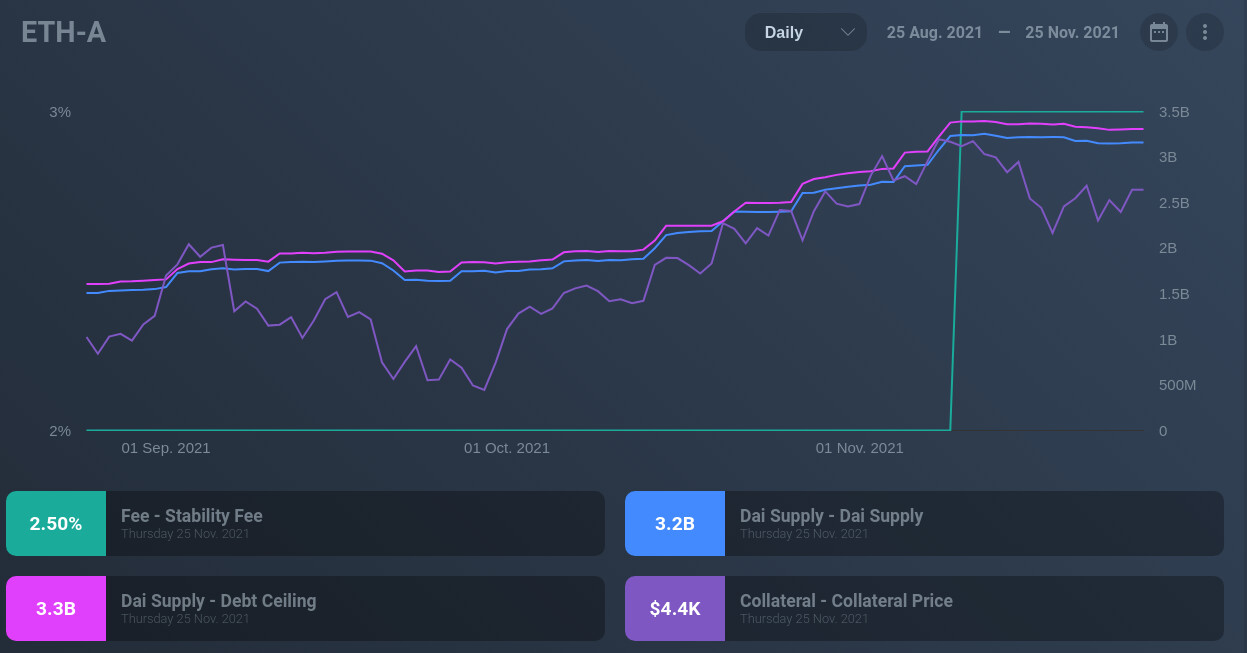 Competitive rates have decreased slightly in the last month. The proposed rate of 2.75% will remain below the competitive rates but bring us closer to them. This continues our policy of proposing small rate changes where possible.

Similar adjustment like with ETH-A. ETH-B users are traditionally less sensitive to rate changes so we propose a bigger increase of the Stability Fee here. 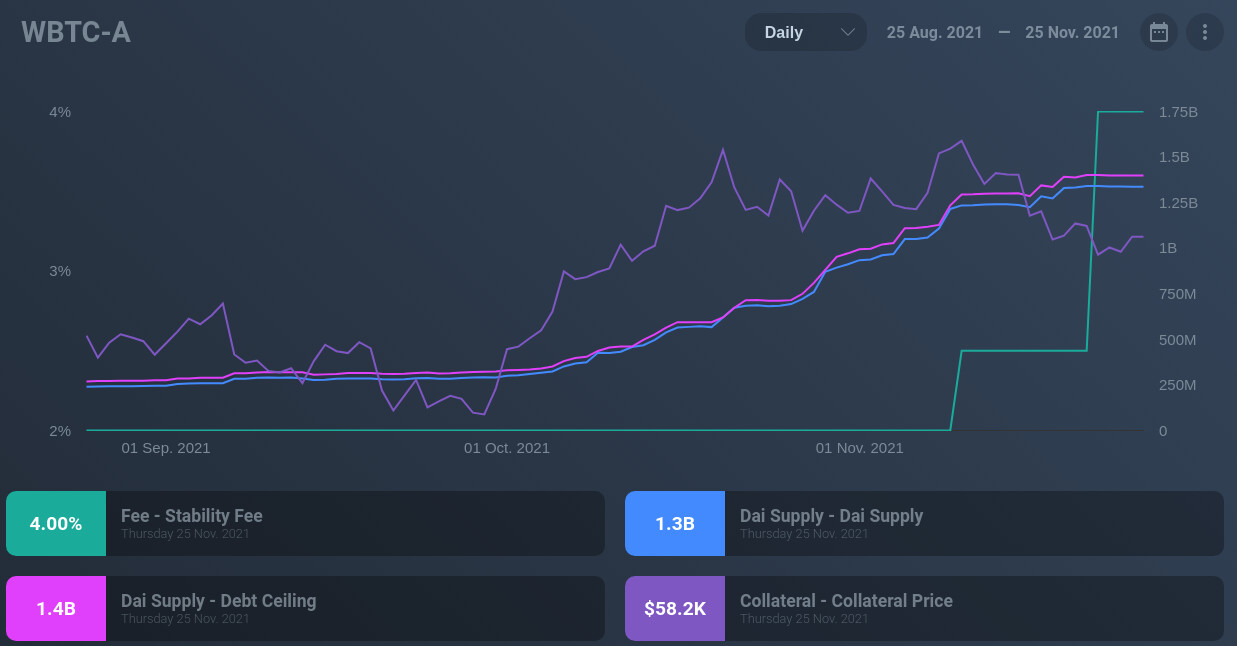 The DAI-minting from WBTC-A has slowed down in the last week, maybe also related to the Mid-month rates increase. The primary driver for the accelerated DAI-minting has been identified - Celsius - so we feel a lot more confident now with WBTC in general which is why we propose changing line and gap to allow more DAI from this vault type. 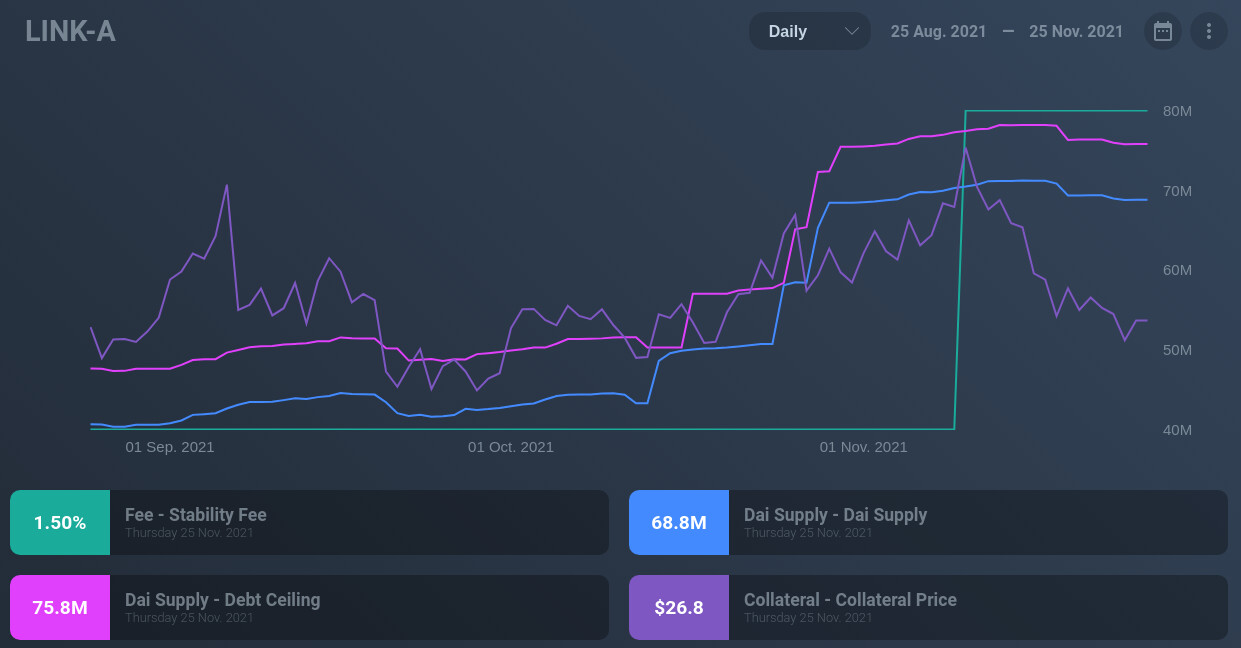 We have been keeping the rates for LINK-A artificially low to stimulate DAI-minting. Within the last 6 weeks ~25 MM new DAI have been minted so we think it is time to bring this to a level we have for other similar collateral types.

With the currently set Stability Fee MANA-A is not a profitable product. We propose to increase the Stability Fee with the target to breakeven with the oracle costs. If this product starts working again, we can decrease the fees again later - if it doesn’t the community should think about offboarding it like we already did with a couple of other collateral types. 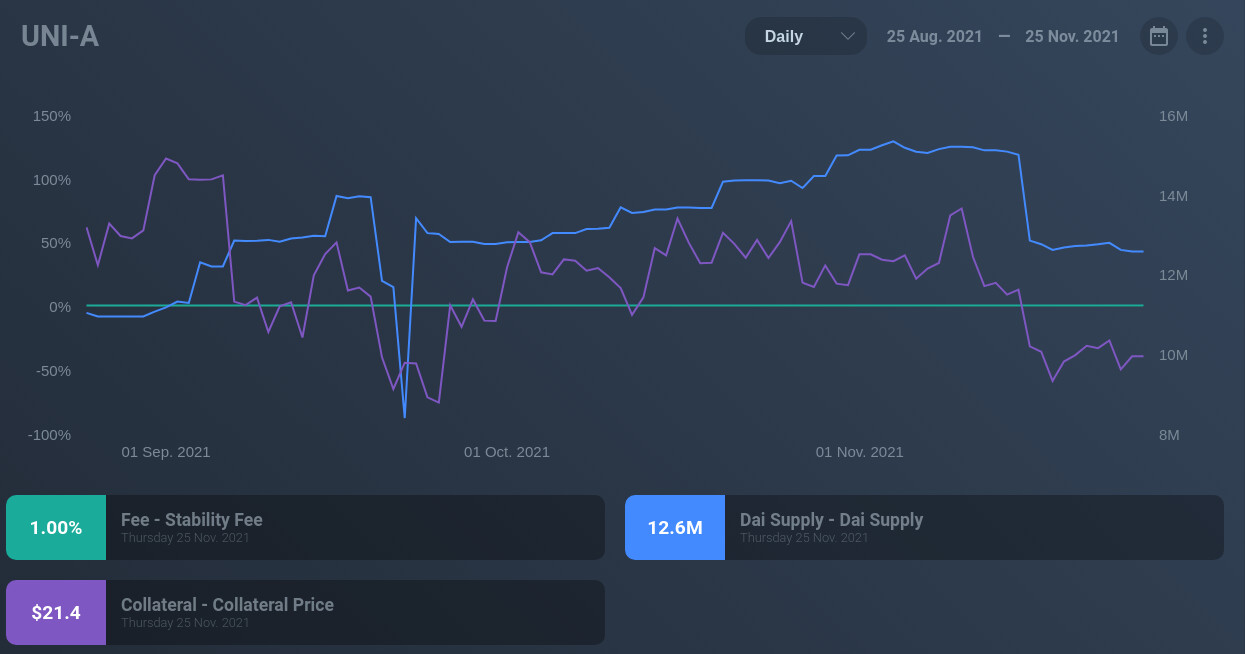 Similar situation as with MANA-A - the rates are artificially low but the intended effect of increased DAI minting is not happening. We applied a similar growth strategy here as we did with LINK-A, but in this case it did not work out. The proposed changes will barely cover the oracle costs.

The GUSD-PSM is going to launch soon. As a first step we propose to increase the Stability Fee slightly with the goal to increase motivation to unwind here and move over to PSM. 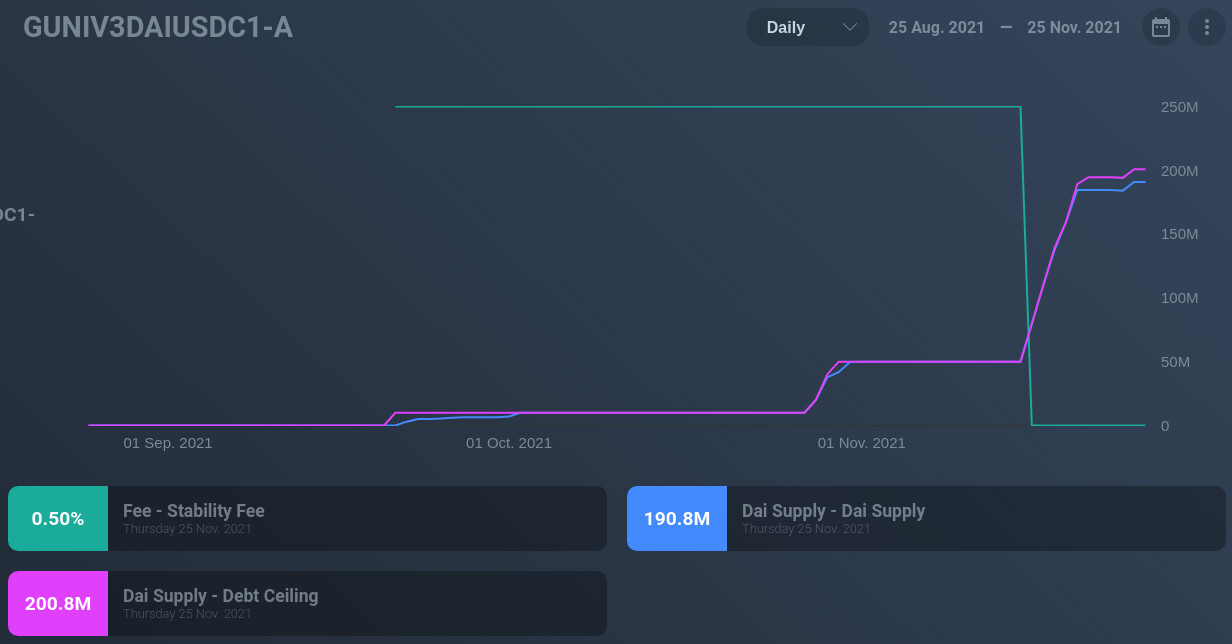 The APR on this pool has decreased significantly so the DAI-minting has slowed down a lot. This is related to the new 0.01% UniV3-pool which already has a much higher volume than the underlying 0.05% pool of this collateral. With the currently set Stability Fee it is not profitable to stay here, we propose to decrease the Stability Fee to reduce the loss for vault users.

Note that there is already a Signal Request in the forum for onboarding the corresponding Gelato-Token for the new pool.

The proposed changes will decrease our annualized income by ~0.75 MM - we still think this is a reasonable change as the alternative would be that the vaults will unwind.

We propose adjusting the Stability Fees to closer align with the rates we have for the underlying collateral types.

Hello @ultraschuppi, is there anything we can do to keep the MANA-A stability fee at 3%? Back then we spoke that there was a need of at least 10M DAI to be generated from MANA-A vaults to cover the oracle’s costs. Back then the vaults were at 100% utilization but the ceiling couldn’t be raised because there were concerns around the liquidity of MANA on-chain (it was around ~$3M). Since then the Decentraland Foundation has provided $10M in MANA/DAI liquidity, and also the token appreciated so now the liquidity has multiplied a bunch of times. The max debt ceiling has been raised to 10M DAI, and the temp debt ceiling is rising every few weeks and it gets quickly filled (we are at ATH currently). And the Decentraland Foundation is not even using the vaults yet to generate DAI using some of its treasury (they are in the process of setting up the multisigs and operation aspects but they will soon), so I’m confident we’ll reach the 10M target that we discussed a few months ago, and the DAI generated by the Foundation will be used to provide liquidity (so the debt ceiling could go higher?). I hope we can reach some middle ground, we’ve been committed to what we discussed a few months back on improving the liquidity of the token and the utilization of the vaults to make the product sustainable.