If so/ We should find a way to build awareness of that. it still looks like 13% Thats scares smaller traders. What are competitive rates at LR. I have not seen any disscusion on that topic.

And its not competitive at all. Unless we want a massive sell of mkr tokens as soon as this proposal gets throw

Welcome to the forum!

Actually we are not going to start to mint any new MMR just because of this proposal. We are still making money. The SB will take longer to fill (it is sitting at almost 50MM now, it needs to be empty before any new minting starts) and there will be fever burning - assuming we don’t immediately compensate the lost fees with more DAI minted.

I do understand the outcimes of that proposal and its short term goals. But LR in AAVE for ETH A is 5%. And LR in Comp for ETH A is 8%. I might be wrong. But they show these figures in the first way. Lets say ETH A SF 3,5% with LR 8%, and ETH C 1% with LR 5% might be a good alternative. Or is there any distribution channels conflicts that we should be aware of? (DefiSaver)

during last liquidation rounds. 90% of colateral were moved away. And sold elswere. I just suggest that it might be a good opportunity to keep clients at Maker if we make LR competitive.

I’m concerned we may be overshooting with rates in a market that’s not super elastic. I would understand if we were dropping rates this low due to competitive reasons but I don’t see that mentioned as a motivator in the OP. If USDC is blacklisted MKR is screwed even with these lower rates.

Our competition (primarily Aave and Compound) are offering very competitive borrow rates when accounting for the value of incentives. The chart below shows borrow rates from Compound over the past month: 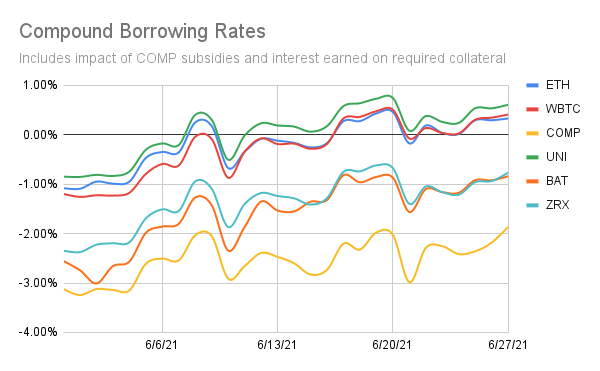 Rates have picked up a bit, but all assets are still at less than 1% in net borrowing costs.

Compound’s Treasury product is also planning to supply USDC to the protocol, which will cause further downward pressure on interest rates.

Why would we pay money to remove float that is free?

The assumption here is that MakerDAO holding USDC directly is risky, and we need to account for this when deciding how to balance our collateral portfolio. Let’s say we assume an annual expected loss / risk premium of 4% on USDC (from a combination of credit and regulatory risk); every DAI debt that transitions from USDC backing to an alternative collateral brings a marginal benefit to Maker’s collateral portfolio. This needs to be weighed against the collaterals replacing USDC, but the loss of revenue may be partly compensated by improved risk profile.

It also means that we require liquidations for profits, and the optics will be “Maker is a predatory lender” trying to entice a bunch of degen small traders to lever up and get rekt

The auction grinding paper offers a good explanation of why high liquidation penalties are necessary. I also think it makes sense that objectively riskier users (those allowing their position to be liquidated) should bear a higher portion of the costs for risk compensation.

@monet-supply Thank you for the detailed walkthrough

The Open Market Committee has identified the concerns of the community around tail-risk with USDC as being a material discussion point on the topic of the longevity of MakerDAO. As a result we have concluded that the optimal course of action is to increase DAI supply (from non-PSM ilks).

and then the nailer to one of the many reasons I will vote against this proposal.

Even though we deem it unlikely to move all USDC off the balance sheet immediately from these changes - we think that as long as it shortens the time span till we can onboard better collateral it is a net positive.

The OMC has identified moving the USDC off the books as a primary goal.

3B later and now this is a primary goal.

Is there any evidence this radical rate move will achieve this goal?

Also if you are just going to cut and paste the contents there is no reason to link to:

I was expecting to see some actual analysis in the ‘source’ reference above.

Example. USDC on the books now is 3B or 60% collateral backing to all DAI. Which means if the system was shutdown today everyone would get .6USDC for their 1 DAI.

First the market share of ALL the remaining ilks would have to increase by another 150% AND ALL that DAI would have to find a reason to buy USDC. With no real incentive for this to happen it never will.

Secondly what exactly is the evidence that making such a dramatic change to rates is going to even put a dent in this issue? I second the following opinion on this:

I’m concerned we may be overshooting with rates in a market that’s not super elastic. I would understand if we were dropping rates this low due to competitive reasons but I don’t see that mentioned as a motivator in the OP. If USDC is blacklisted MKR is screwed even with these lower rates.

Which is another reason to do this move in steps - to gather data. I stand against this proposal as it stands because of the sheer lack of critical analysis or data indicating Maker giving up on 1-2M DAI/month revenue is going to do anything to solve this problem. I’d rather put up a $1M bounty for solutions.

Now lets go to what I feel are the peripheral issues.

I have said this before and will say it again.

I will be voting NO on this proposal as it stands until some amount of evidence or analysis is put forward indicating this move will address the problem, and that a move of this size is required at this moment.

I am going to point out the reason why we are here is because so far there has been no movement on alternative PEG management mechanisms.

Or what I consider to be the Maker Trilemma.

Thank you for the response MakerMan,

Unfortunately there is no dataset of sufficient length which we can use to have a predictive model.

As a result we reason from first principles.

Also I feel it is very relevant to note that many of your criticisms address issues beyond the official scope (mandate) of the committee.

While it is unexpected that such SF decreases will make a big difference in the USDC, it is important to keep whatever we currently have as crypto loans. Some significant positions are barely or non-profitable for their holders (Maker loans for yield farming on Aave Compound).

It will go to 75% or even 85% usdc anyway. CDP Rank 100 (out of 5000) in ETH A - 250.000 Dai owed. DAI holder rank 1000 (out of 300.000) - 250.000 Dai. Its all about DAI demand for taking profits. Another demand comes from stories around UsdT balance sheet. But this proposal will hit the Mkr holders in a first way. Just as previous one. As long as market in the Bearish santiment it should stay on hold. Extensive research on the cdp vaults across competitive protocols should be done.

This not the way to move USDC off the books.

Please show, based on current usage and not expectations of gained market share, profit or loss if those rates are implemented. Apologies if I missed it somewhere.

If losing, then what additional market share/volume would need to be obtained to break even.

Even if no market share is gained, and accepting that it is difficult to prove a counterfactual, isn’t it reasonable to expect Maker to lose a substantial amount of leverage volume if its rates stay above those of other venues? As for profits, Maker is quite far from being safe enough to go for short term profit maximization.

Also, about the current creativity we’re seeing wrt moving USDC to entities with a legal footing: these new real-world expansions should be done gradually, preferably at a safe pace. So we should fire on all cylinders (G-UNI, Portfolio, rates changes, etc).

Even if no market share is gained, and accepting that it is difficult to prove a counterfactual, isn’t it reasonable to expect Maker to lose a substantial amount of leverage volume if its rates stay above those of other venues

What we need is a really comprehensive user survey. Remember that only about 20-30% of DAI are from sources other than the PSM and the top 5 (yes, just five!) vault owners.

Without further data, I would say that shows we are competing on grounds other than price.

It is interesting because if I follow your reasoning for the last 2 years, before the PSM, we were extremely lucky and the change in rate we used to apply every weeks to maintain the peg had actually no effect. It was just a coincidence.

if I follow your reasoning for the last 2 years, before the PSM, we were extremely lucky and the change in rate we used to apply every weeks to maintain the peg had actually no effect.

I wouldn’t say that the current situation is necessarily reflective of the past. Looking at active vs historical vaults shows that there clearly used to be a lot more small-holder vaults in the older ilks. Those users probably were more price sensitive. Big institutions care about price, but not only price. Being a reliable partner for them is probably just as important.

At the end of the day, though, we’re speculating. Because we have made little to no effort to actually understand who our vault users are and why they use us. We can point to Nexo all day long and call them on the phone, but for most vaults, we have not a lot of insight into who they are or what they’re doing with their DAI.

I’d feel less squeamish about drastic rate cuts if they were based on some data to let us understand the magnitude of demand at lower rates, and not just the direction. It all feels very… unscientific and like we’re engaging in some magical thinking if we think our most price-sensitive customers are necessarily going to be the ones who make up the shortfall in revenue.