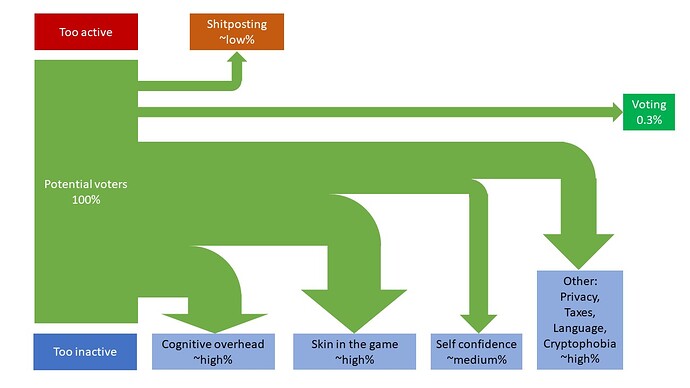 Maker governance participation has been somewhat lower than hoped for. Several community members have suggested proposals for incentiviezing MKR holders, but the below analysis suggests that non-participation in the MKR voting process is multifaceted and schemes based on direct or indirect crypto incentievization is unlikely to yield the hoped for results.

Cognitive overhead
Participation makes no sense unless the MKR holder understands what Maker is trying to accomplish. The cost of reading up on Maker is easily a week or two of sunk cost, measured in time. Needless to say not everyone can put in these kinds of hours for something that may or may not be of value further down the road. Ask yourself this - when did you last have a spare week or two at your disposal? Few people have the time for this, making cognitive overhead an important factor determining if holders will vote or not.

Skin in the game
Does the token owner have a sufficient share of MKR as compared to total holdings for participation to make sense?

Following Maker takes at least four hours per week if we count the governance meeting, the community meeting, chats, blogs and some time to think. If we assume that a full time crypto investor works 40 hours per week, so unless MKR makes up at least 10% of the holder’s total crypto, there is simply not enough hours to go around. And that is provided you work crypto full time, for crypto enthusiasts with a non-crypto day job MKR would have to make up an even higher portion of total holdings for participation to make sense.

For a whale or an investment bank owning scores of different tokens following all tokens closely is next to impossible.

Better off shitposting
Does the token owner have a sufficient share of MKR as compared to total MKR for participation to make sense?

If a crypto enthusiast only owns a small amount of MKR, but wants to wield influence, at some point opinionating on discussion platforms will be more efficient means of influencing outcomes compared to voting.
Assuming the MKR holder actually thinks he or she adds value, and assuming 10% annual growth of MKR value is the goal , we arrive at the following formula:

Solving the above equation, we arrive at a critical figure of 7.6MKR. Any lower than that and voting is logically replaced by social media activity. About 1600 MKR holders have accounts with balances in excess of 7.6MKR, with 14400 accounts being under the threshold. Again assuming roughly five accounts for each holder there are 2880 MKR holders that might as well shitpost instead of vote. The rationality of this is however entirely dependent on the internal belief that the influencer actually adds value through this activity. The actual volume of shitposting is, with some exceptions, actually rather low so it is assumed the vast majority of MKR holders are knowledgeable about their own limitations.

As a sidenote, as the value of MKR increases, the formula predicts that shitposting on social and later mainstream media will only increase as a way of exercising influence compared to participation in Maker governance.

Selfconfidence
Unless the MKR holder feels sufficiently confident that his or her involvement will add value to Maker, participation makes no sense. The holder did have confidence to get both into crypto and subsequently into MKR, but lost courage before deciding to participate in actual voting.

Other issues
Are there other issues irrespective of holdings preventing users from voting. Issues identified so far are lack of privacy, fear of discovery by tax authorities, fear of losing MKR through the voting contracts and fear of smart contracts in general (cryptophobia).

Language is likely also a factor. Maker as an organisation speaks English. Many people speak enough English to understand the basics, but not enough for following the talks or for governance participation to feel right.

Who is actually voting
Looking at the figures displayed on the Maker Governance Portal indicates that the bulk of proposals passes with about 50 votes. This represents about 10% of active MKR holders and about 0.3% of all accounts.

Conclusions
Based on the above any designer of voting incentives would be encouraged to think about what group of non-voting MKR holders they are trying to get to vote. Any design encouraging MKR holders that are also highly active social media users will likely just distribute MKR to holders in the ‘Shitposter’ category.

Education on the other hand should take into account the significant time it takes to get holders up to speed on the fundamentals of Maker. As there already are slide decks available and multiple Youtube clips on the basics of the system, new ideas will likely be needed.

Education, possibly combined with system streamlining, could also convince MKR holders that presently are somewhat overwhelmed by the pletora of choices and processes. The knowledge that only a small minority of voters are using their vote could also act as an incentive - at the moment each MKR used for voting is actually leveraged 330x!

System streamlining, or system simplification, could possibly also convince more token holders that they actually are valuable voices in the community.

Last but not least, dapp development and code reviews will alleviate some of the privacy concerns and possibly irrational fear of losing MKR through participation in the voting process.

All in all it will likely be a long and drawn out process to increase MKR holder governance participation.

Don’t think we should change the word shitposting for something else.

I have hard time reading this. Just an opinion like that

Thank you for bringing up this subject. I really think it is crucial to MakerDAO that governance participation increases. And I believe an additional financial incentive is need before more of the right people can justify spending their time on MakerDAO governance.

I agree. I think your “better of shitposting” threshold of 7.6MKR might be way too low judging from my own experience

Another issue imo is MKR price volatility. Hodling a volatile asset as MKR might be too painful for some people which might cause one to sell when the price is trending down and hence lose their incentive (at least for a period) to participate in governance. I don’t know if it is possible to create a mechanism that smooths price swings in either direction. But it seems like a less volatile MKR price would also be beneficial to governance participation.

Anyways would be cool to see the Ethereum foundation or Maker Foundation to fund someone to solve this problem for good. Seems like it would be beneficial to all DAO projects.