It’s no secret that the SES core unit has been working in parallel with the MKR compensation Working Group to document its own vision on what an MKR incentive plan could look like.

In preparation of tomorrow’s SES Budget MIP that we will propose, we want to present this alternative MKR compensation plan for the community to consider. The design decisions that we opted for are very different from the decisions that the Working Group has based their plan on. We hope that this will create a healthy debate that will benefit not just the core units that are directly involved, but the entire Maker ecosystem.

Since the full details of the plan comprise no less than 21 pages, we’re putting just the introduction and summary here, while everyone is invited to read the original document with all the details.

Note that while the model has a lot of detail, the parameters in the document aren’t necessarily final and we are still considering some changes.

For those that don’t like reading, we explained how this Program works on a video in one of the SES Weekly Updates. 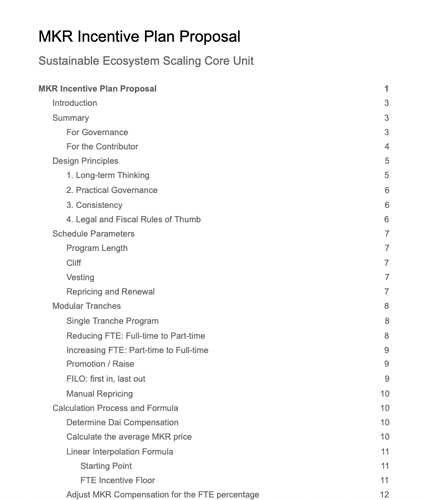 Maker today is uniquely positioned to take the next leap in crypto history by being the first DAO to start scaling up, ultimately to the size of a decentralized Google or Amazon; a vibrant ecosystem with dozens of teams developing the protocol in parallel and running decentralized financial services all over the world. To succeed, the one thing we need to do is keep attracting new top talent and retain it in the long run.

With the MKR Incentive model we propose, we want to attract the best talent in the industry and convince this talent to build a long-lasting career in the DAO. We want to retain their experience for years to come to keep growing the most substantial moat that Maker has: its human capital.

We provide a summary with the key points that characterize the proposed MKR Incentive Plan and set the stage for the more detailed explanation in the document. We encourage the reader to read at least the Design Principles section and understand the motivations that went into the design.
The plan has some abstracted metrics for governance to assess its cost quickly. For the contributor, a lot more detail is essential.

» Read all the details here

Whoa. This is a lot. I’ll say nice job without knowing the content just based on the amount of work that went into this. Guess I know what I’m doing tonight. Will consume and probably have questions.

This is truly great work Juan and @wouter — thank you—I even like the reference to the current woof-woof mania: “while everyone and their dog may be quitting their job to join crypto amid a bull market” haha!

I’m about half way done with reading this Terrific write up and I have 1 Question I want to ask before I forget. For tax purposes, entities will often hire a specialist to perform independent valuations to assist in determining the value of the compensated/awarded shares/restricted stock.

With that in mind, how should the CU employees assess the grant date for tax reporting purposes? Is this something where y’all will look to outsource to an auditing firm? Again—only halfway thru—not sure if you cover such.

With that in mind, how should the CU employees assess the grant date for tax reporting purposes?

Not the author, but given that this is direct compensation and not options, I suspect it should be reported as ordinary income based on the market price of MKR on the day of receipt. The budgetary assumptions of value by the grantor (MakerDAO) don’t impact the tax treatment of the grantee (employee/contractor) who accounts on a cash basis.

Or at least, that is my understanding if you are in a USA jurisdiction.

Thanks for the comment, @ElProgreso. Looking forward to seeing what you think once you are done.

While, the main objective of this Plan is not to be “tax efficient”, we tried to make it easier based on the comments we have received from different people (that seem to know more about taxes than ourselves).

Apparently, if there is some uncertainty that you will receive them (because you could quit or be fired before the cliff) you might be able to defer taxes until you actually do. (Not legal advice, please contact your friendly tax advisor).

That said, it will be up to the Core Unit and each individual Contributor to make sure that they are respecting the tax laws.

On another note, @layerzero will be working (through SES) on identifying legal risks and opportunities for the DAO and bootstrapping different models and solutions that might help.

I think it might be useful if you could link the video session (which I had the opportunity to attend) where you presented this framework. I think it was about 1 week ago?

It was very well done, but I can’t find the link on MakerDAO youtube channel.

could link the video session

Added in the original post. Thanks for the suggestion, dottore.

Is the idea to decide between this and MIP53 and only choose one? Or could we end up with 2 (very different) MKR compensation plans?

Would love for the brains behind each MKR Compensation Plan to join forces and put out a common compensation plan.

I’d like to be able to see both plans in this level of detail. It was very helpful to even include examples of how changes in MKR compensation would be handled for people who shift between part time and full time equivalents. I think it gives a lot of transparency to the process that will put people at ease.

That said, weren’t the working group’s recommendations aiming to be guidance for CUs? Whereas this plan is for one specific CU? They may not be completely comparable.

Is the idea to decide between this and MIP53 and only choose one? Or could we end up with 2 (very different) MKR compensation plans?

Hey, Jura. Welcome to the blog.

We’re hoping to start a fruitful discussion with this.

Very impressed with the level of detail here! I haven’t had a chance to read the whole thing yet but I have a few questions after skimming:

Thanks Juan for this very thorough well thought-out plan. I think this could very well be used as a benchmark for future DAOs on how they plan to incentivise their contributors.

I agree with you that the way the plan is structured has to be balanced and flexible enough so that it works towards growing and benefitting the protocol vs. the contributor(s) just maximising one’s compensation (regardless of how it would affect the protocol.)

Really appreciate the work behind this and will be keen to see how this gets implemented (if it gets voted through).

Thanks for reading through it, @seth.

No. The idea is that governance shouldn’t care about how the MKR is distributed within the team. Core Units can also choose to use different parameter settings to match the Core Unit’s culture or concerns in question. Strictly speaking, there are only two parameters that are relevant for governance:

This is enough to know how expensive the Core Unit is and to allocate the necessary MKR budget. While it may reflect well on the Core Unit to be more transparent than strictly disclosing only these metrics, it should not be necessary to disclose individual fees.

Another possibility is to disclose the detailed calculation only to the self-accountability auditor if your core unit is working with someone for that.

We don’t think there should be. The cliff is reinstated in cases when a Contributor decides to reprice and reset their Compensation (“quit-and-rejoin”), akin to a new joiner.

That said, it’s perfectly possible to consider tweaks like this for your own Core Unit. If you believe that it is fair and it will drive retention, you can try it. Please do share any ideas or tweaks you might have (we might want to steal them).

No, employees would not be excluded. We’re just assuming contractors by default. The plan has no mechanisms that would typically have social tax implications. And, of course, we give no guarantees: check with a specialist for your jurisdiction.

I’ve modified the gSheet that the SES team created to simulate MKR compensations:

You can calculate the total MKR disbursement for the Core Unit and simulate the compensation for individual team members based on salary level and FTE %.

Also, you can modify the MKR lock-in price by choosing the lock-in date and days in the period (e.g. 180 day). You can check the historical data in the “MKR Price” tab.

Note: It should be updating every day to retrieve the latest date, if it doesn’t happen please let me know in the forum or Rocket chat @tadeo.

Hey @tadeo ! Getting an error when I fork the Cookie Cutter doc, and I’m not sure the number displaying right now is accurate. Tried to do some googling to get the same info but am coming up dry.

EDIT: Thanks Tadeo for reminding me how to use a spreadsheet