There is currently a discussion going on in MIP35 that would see maker lend assets purchased via the PSM to compound in order to gain some interest.

I would posit that a better decision for maker to would be to try and get the USDC off of its books outright.

so the TLDR of everything below is: auction off USDC to buyback MKR instead

There are basically 3 motivations behind this in my mind:

However in order to be able to get the USDC that was purchased via the PSM off the books maker first needs to pay down it’s liabilities associated with the PSM. See this post explaining dai liabilities.

Luckily the protocol has a large store of equity that it can use in order to do this.

So what i would suggest, is that instead of storing ALL of this equity as DAI in the surplus buffer we can convert a portion of it into equity stored via USDC in the PSM.

So how do we do this? Well first we need to decide the rate at which we want to pay down the liabilities of the PSM. This could be implemented in a number of ways, but i would suggest that we pay it down like interest (maybe call the rate tint). That is, the PSM would have some annualized percentage rate associated with it and that rate would be “payed” to reduce the protocol’s DAI liabilities. As far as the technical implementation of how to pay i believe all that needs to be done is to increment the systems sin. This would mean that over time the system would accrue sin via the PSM and once that sin reached 50K dai it would be paid off via the system buffer just as it is today.

Over time this would mean that the protocol would gather equity in the PSM, so once you have 10,000 USDC worth of equity stored there you should be able to kick a flap auction the same as you do today with DAI only this time you’re auctioning off USDC instead.

The nice thing about this does not change the overall amount of MKR you’re buying back. This is because you don’t destroy any equity with this scheme you just change it’s storage medium. Downside is that it does have implications on how quickly you can store DAI in the stability buffer which is still important as DAI is the systems unit of account.

I wanted to throw this idea out there before MIP35 got too far along as a potential alternative, so this post is a bit rushed. That said, What do people think?

We can’t sell usdc to buy mkr as they are collateralised.

But a flipper for stable coin to allow liquidation would be a good thing.

BTW thanks for moving the debat somewhere else.

No i mean a flapper.

The proposed auction system above would do the same thing (i.e selling equity) only this time the equity in question is stored as USDC.

Also i see NO reason why this is true.

We can’t sell usdc to buy mkr as they are collateralised.

If you sell collateral to buy MKR, that doesn’t work.
You don’t have the counter part of the Dai.

The system will automatically or not trigger the flop.

If you sell collateral to buy MKR, that doesn’t work.
You don’t have the counter part of the Dai.

you’re not selling collateral in the traditional sense here.

You first have to write off amount you are selling as sin or otherwise the accounting doesn’t work, but once you have done that you have reduced the system’s overall dai liabilities. Your assets didn’t change in doing that and your liabilities went down. That is equity by definition.

But in that case in case of emergency shutdown. Some Dai owners won’t get they due.

But in that case in case of emergency shutdown. Some Dai owner won’t get they due.

this isn’t true either. by writing off as sin you are reducing your dai liabilities and thus the overral amount of dai there is.

Bc you wrote it off as sin the DAI in the surplus buffer never makes it to the market so there is no-one holding some lien on the asset in question and the protocol is then free to do whatever it wants with it.

I am not convinced that you can sell collateral to buy MKR.

that is bc traditionally collateral has been an encumbered asset.

Once you remove the liability from the equation the asset is no longer encumbered and you are free to do whatever you want to with it.

This is a pretty cool idea! One question though (and a potential follow up), What would happen to the MKR we buy? If we are holding it, doesn’t that introduce some extra risk during a market crash in that our balance sheets would be getting hit from both sides?

What would happen to the MKR we buy?

I didn’t cover that fair. Today when the protocol sells its equity to buy MKR it burns the MKR. I would presume the system described above would do the same.

If I’m understanding this proposal correctly, you’re just adding leverage to the system by selling collateral to purchase MKR? This results in “unbacked” Dai. The Dai that was generated in order to purchase the USDC is now backed by MKR which is extremely volatile.

I believe the idea is to slowly buy back the collateral using the income.

But there is another catch, the PSM needs the debt to reverse the position, during the buy to maintain the peg on the other direction.

If you buy the collateral how do you maintain the peg on the opposite direction.

Yeah Ill try and put together a diagram to demonstrate what’s going on here.

Ok here are some images to help visualize this.

So you have some assets you have some liabilities nbd. Some of the assets are loans some is the USDC stored in the PSM. Now lets say you’ve decided that you want to pay down the PSM liabilities at the a rate of 2% / year. That roughly works out to 1MM DAI that you would be taking from the protocols income to pay down the PSM liabilities. This is what I am suggesting you do by “writing off the psm’s dai liability as sin.”

After doing that your balance sheet looks a bit more like this:

Notice now that the PSM assets and liabilities are not balanced as they were before.

So really your balance sheet looks a little more like this after doing that.

And this 1MM in USDC equity is now what you can sell in a flap auction.

There is no leverage involved in doing this though. The protocol is using money it already has to pay down its liabilities.

Like @alexis says there are some catches with this though:

Ah got it. So to summarize: Instead of selling Dai from the surplus buffer to buy MKR, sell USDC from the PSM.

I think this is smart

I think there is some issues with your representations. First, the assets and liabilities(+equity) sides should be equals at all times.

The stability buffer is our equity and should be on the liabilities side. Now you are faced with the issue of which of your DAI box you decrease. There are not 2 pools of DAI but only one and they have 0 links to the asset side. 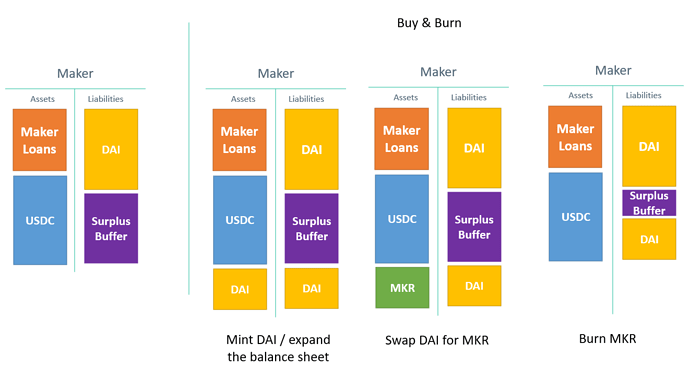 And what you suggest 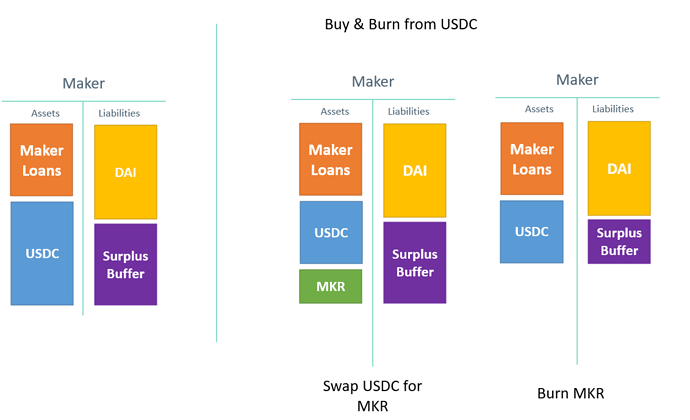 While different, they lead to the same outcome. The Buy&Burn with DAI increases the DAI supply (decreasing the surplus buffer while the balance sheet size remains the same). The Buy&Burn from USDC decreases the balance sheet size. But if the DAI demand stays constant (which we can assume), this will decrease the DAI price (supply vs demand). Therefore, this will be arbitraged using the PSM by providing DAI to get USDC. This will decrease our USDC assets and our DAI liabilities.

Both methods are doing more or less the same. With USDC it is more efficient, but with DAI we get the PSM fees and DAI is a bit de-peg until arbitrage.

Having USDC as reserve is not interesting for us as we have an indirect interest fees on Dai.

We can have some but Dai is a better option for multiple reasons.

Also why do you focus on PSM, there is plenty of abandoned usdc vault, aren’t they us now?
Also the PSM needs the USDC for the opposite peg which is actually probably a bigger problem as in the opposite side the only solution is to buy instead of selling.

The reality is that we can’t just buy all collaterals with the interest product. It doesn’t sum up.

Hmm maybe it’s possible to put USDC in PSM to gain rewards by lending out but that can be withdrawn if needed? So for simple example, let’s say there’s 50 million USDC and then 50% are put into protocol that generates 5% yield. After a year, it would be yield of 1.25 million USDC. And maybe the protocol can use this 1.25 million USDC “surplus” to buyback MKR and etc? Just thought