The Surplus Buffer is the instrument within the Maker-Protocol to reduce the amount of flaps (auctioning DAI when the Protocol runs profitable) and flops (auctioning MKR to compensate for bad debt or expenses). It also provides some kind of safety net on large market downturns to compensate for loss on the protocol to avoid minting DAI when the general sentiment on crypto is bad, the MKR price therefore low and the amount of MKR minted unreasonably high.

It is a parameter controlled by Maker Governance. Historically, we have always tried to keep the parameter to a certain percentage of DAI in circulation - usually between 1% and 2%. We did this in several executive votes (see corresponding Signal Requests here). 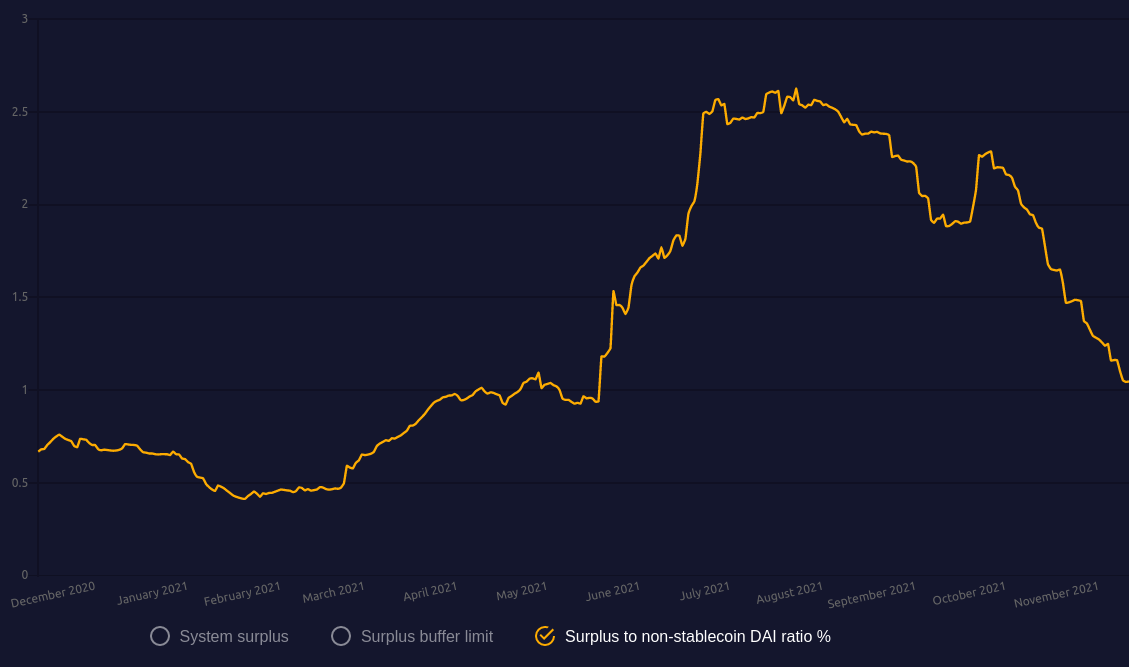 I want to propose that we introduce an Instant Access Module that would allow any user to adjust the Surplus Buffer based on parameters decided by Maker Governance. We already have a similar mechanism in place for adjusting the Debt Ceiling for vault-types.

I would like to kick off this pre-MIP discussions with the a proposal of dimensions that would need to be part of this new IAM and would be under control by Maker Governance:

For each of the vault-types ilk we set a desiredBufferPercentage which is the amount of Surplus Buffer we would like to have based on the DAI-supply generated by all vaults of this vault-type.

As many think the Surplus Buffer is far too low from a risk perspective but we don’t want to stop burning completely, we need a way to limit the growth of the Surplus Buffer. The easiest thing that comes into my mind is that we introduce a new parameter that sets the percentage of change possible related to the difference of the current and the target Surplus Buffer within a defined timeframe.

Example: Assuming we currently have a Surplus Buffer of 1 MM and the Target Surplus Buffer would be 2 MM and we have the growth rate set to “1% per week”. If the last increase happened exactly one week ago, calling the IAM would result in the Surplus Buffer to be set to 1,010,000 DAI.

Same mechanism as for the Growth Rate - but I guess we want to be able to set a different rate here.

Even if my idea is immature or super bad or very important parts are missing, I hope we get some discussion going on. At some point the discussion might result in a MIP. Happy to hear your opinions and even better ideas!

Thank you so much for putting this together Schuppi, long overdue

Can’t wait to see this implemented.

Awesome proposal! And especially that the target is based on a percentage of each vault type.

Hmmm maybe I got your intention wrong - but isn’t the growth rate doing something similar though on total and not on ilk level?

I think you would want a global ‘risk appetite’ multiplier as well, such that governance can modify everything proportionally.

Good idea, will add this to the post later.

I think any automatic system probably shouldn’t adjust the buffer downwards. I can see lots of cases where losing total DAI minted is a result of some major problem that might require us to keep the existing surplus and not automatically sell for MKR to burn. Feels like manual decreases might make more sense

The decrease rate can just be set to 0 at the beginning (and maybe stay there permanently), but maybe there is a case where it does make sense to have this used…

I suspect we should handle ‘growth rate’ by lerping the global multiplier parameter I mentioned up front. This would let us decide things in the form of ‘aim for surplus equalling 3% of risk-weighted assets by 2025, or somesuch.’ I think this would make things simpler.

We could add a lerp in front of it

An interesting discussion for sure. The decrease rate has some potentially interesting implications that it’s worth thinking about.

If there’s a market crash and we drain a portion of the stability buffer leading to a corresponding drop in the Target Surplus Buffer we would have an opportunity to possibly have Flaps at a lower MKR price as we refill the buffer. This could theoretically burn more MKR (for this to work the MKR price would need to follow ETH/WBTC in a market crash - which I suspect it largely would but you can never tell in crypto).

Obviously, a counter to this is that the worst time to decrease our buffer is after a market drop in case the market keeps dumping. Interesting to think about though.

Maybe we should keep a “war chest” of Dai funded from fees but separate from the Stability Buffer that could be used to Flap after an x% price drop in MKR to enjoy the best of both worlds.

Maybe we should keep a “war chest” of Dai funded from fees but separate from the Stability Buffer that could be used to Flap after an x% price drop in MKR to enjoy the best of both worlds.

Actually might be worth to add another parameter that reduces the target surplus buffer (0 in the beginning) to take account any future treasury we keep outside the system surplus?

Hmmm maybe I got your intention wrong - but isn’t the growth rate doing something similar though on total and not on ilk level?

Yes, I agree that it is similar as long as SF levels are not changed. If I understand it correctly(?), with your example of 2% desiredBufferPercentage and for instance an SF of 3% on that vault type the 1% per week growth would lead to ~35% of the SFs being used to fill the buffer (2%*1%*52/3%). If the SF was changed to 2% this would change to 52%. So maybe we then need to consider if the growth rate should be changed when SFs are changed?

Not quite sure I get the specifics. My interpretation:

The other value is that Maker would also now focus on the R% and its associated components which are provided by Risk. And the underlying Risk methodology to generate the weights. Then we would be arguing about how to measure and manage risk, which I view as a definite improvment…

Thanks for putting this together, a very important subject.

I would request @Risk-Core-Unit weigh in on metrics to determine - seems they are focused on CET1 Ratio (Equity / Risk Weighted Assets) but if leverage/liquidity ratios are relevant we should use a combination.

IMO, burning decision should be quite easy to determine, if risk metrics < defined risk IAM, funds flow to SB, otherwise burn. I think there should be hard minimum(s) on the risk metrics. For example, if CET1 Ratio is <2%, all funds flow to SB. If CET1 Ratio >3%, all excess funds are burned. When the ratio falls in the middle, the SB/burn ratio could adjust linearly until the min/max are hit. These values are purely for illustrative purposes.

Would also like to see how risk is calculating the recommended buffer/values so the community can understand the inputs and pros/cons. I’m not opposed to burning a small % of MKR whenever SB > 0 as well just so the burner is always on and there is no technical atrophy for flaps.

@williamr mentioned the below in the recent signal request thread which I wanted to provide visibility to given the relevancy in this discussion.

Both @Eumenes and @Aes raised important points. Only two additional ones:

There is absolutely no need to keep raising the surplus buffer continuously. Safety lies in the liquidation mechanism, not in building up buffers. You will never ever be able to buffer when Maker starts to take on huge piles of Treasury Notes and similar debt instruments as the amounts of DAI that can be printed will be enormous but the yield is very low. If you insist on a 2%-ish buffer you will only end up never burning.

It kind of sounds like you are arguing for infinite leverage?

Yes, I agree that it is similar as long as SF levels are not changed. If I understand it correctly(?), with your example of 2% desiredBufferPercentage and for instance an SF of 3% on that vault type the 1% per week growth would lead to ~35% of the SFs being used to fill the buffer (2%*1%*52/3%). If the SF was changed to 2% this would change to 52%. So maybe we then need to consider if the growth rate should be changed when SFs are changed?

sorry for the delay, had no time this week…

hm no - as long as the Surplus Buffer is not filled, we won’t have any burning. All income will just reside in the System Surplus. With higher SFs the incoming rate will just be higher (assuming same amount of DAI minted).

does that make sense?

The calculations should allow for embedding forward-looking (1yr) assessed provisions on each rwa asset due to estimated credit risk. The estimated provision $ should be provided by RWA CUs.

I feel this can be done by setting appropriate desiredBufferPercentage?

. But we need to start somewhere… We can start those calcs offchain until we’re comfortable enough for an onchain param.

does that capture your idea?

. But we need to start somewhere… We can start those calcs offchain until we’re comfortable enough for an onchain param.

yeah, maybe my approach of thinking how we can get this into solidity is too strict here. I want to draft something that we can code as a IAM - the parameters would be under governance controll and should be able to reflect those onchain calculation results.