There is so much stuff that still needs to be developed… Synthetic assets, rollup vaults etc. It would be madness to get distracted from the real battles ahead of us that we must win to survive, just because we suffer from not invented here syndrome regarding staking.

There are already multiple high quality staking assets out there and no reason to believe the amount of quality projects won’t grow further, and it is just obvious that tapping in to those in a secure and diversified manner is the way forward for maker to easily and decisively capitalize on staking and become the king of staked eth as collateral.

My sense from your posts is that engineering time would be better spent elsewhere. I’m sure if we went down the path of implementing our own staking service we could make it work and make it profitable but do we want to be in a highly competitive, tangential business or focus on our core goals and competencies and pursue higher ROI projects?

exactly this!
The idea is to give Vaults a kind Super Power with a Yield generating capability in ETH.

Wouldn’t we accomplish this with the stEth approach Kurt described?

Wouldn’t we accomplish this with the stEth approach Kurt described?

Not really, Maker being the interface of the staking service could grant vaults a direct interaction with the ethereum staking economy where we can control the policies and incentives of the yields for minting Dai in a single product. With StEth is all very fragmented because the owner of the interface is someone external to the protocol.

It would be madness to get distracted from the real battles ahead of us that we must win to survive,

Also is a way to take the lead in case other staking services think of minting stablecoins with this same model, something that sooner or later will happen, since these services will control the best Collateral available, Ethereum.

Regarding “distraction”, I don´t quite get this as an argument since we have the capital to deploy more engineering teams to design and implement this.

PS: Ok, we are late to the party 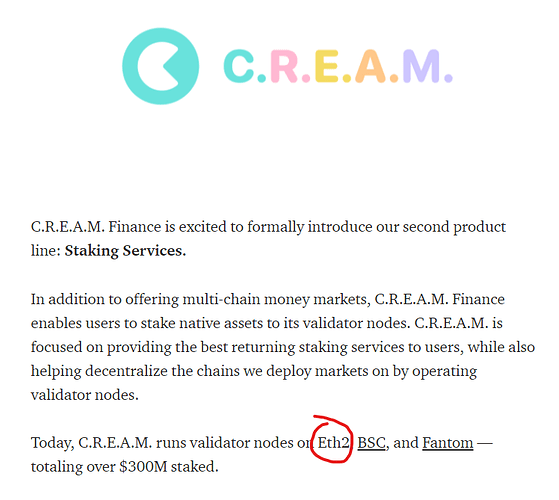 Have you considered wrapping an Aave short position into a something Dai can be issued against? Or perhaps instead having the vault contract directly manage its own Aave account that contains a short position?

I have not thought through this yet, I just know offering shorting would reduce system risk and increase customer base.

I don’t get this argument. The market has already provided liquid staking derivatives that will make very viable collateral. Everyone seems to agree that the top priority right now is DAI supply; well, I don’t think we’ll get significantly more supply by building our own staking service versus onboarding derivatives of the large, successful services that already exist.

But those are just speculations. Perhaps @Growth-Core-Unit could survey current or prospective users to get some data?

But those are just speculations. Perhaps @Growth-Core-Unit could survey current or prospective users to get some data?

( although is not an official survey

every single person that I asked their opinion about this

You didn’t ask me. I’m with Kurt. I don’t understand the point of integrating everything. I’d rather the staking be a separate thing.

I agree that it is about core competencies and risk adjusted returns. I think the reward is not worth the effort and risk in pursuing this venture when others have already paved the way. It would be a lot to ask when other ventures like eurDAI are more important.

I think that should be measured with tweezers, the purpose of MakerDAO is always to regulate DAI.

But working hand in hand with market makers and other protolos in the area would be great, as it is done with Hegic for example.

Step1: Stake your eth in a maker vault
Step2: Get a Dai loan that pay itself over time with the Eth yield
Step3: Live of off your Eth and Dai
Step4: Conquer the world.

@MarianoDP I think this is an amazing idea, happy to see the community enthusiasm.

This is almost identical to Alchemix.

yes, it is their motto, they get the return by reinvesting DAI , we can take it to the next level

Step2: Get a Dai loan that pay itself over time with the Eth yield

If this becomes a reality, I will be like this

We will be the first to use it haha, how great Mariano.

It might be worth noting that Coinbase has been offering ETH2 staking since April (which was our ATH for ETH locked). Binance does as well. Coinbase’s fee is 25%, Binance’s is 0%, and they both have stablecoins that they could in theory start lending against the locked ETH2.

In the very long term, what proportion of the total ETH supply do we estimate will end up being staked? Why would ETH holders not stake their ETH if there are frictionless ways to stake, earn rewards, and take out cheap loans to do whatever else they were going to do? (Note that Coinbase covers the cost of slashing, so there’s no risk to the user; probably why they have the higher 25% fee.)

Who will come to Maker to:

if they’re able to borrow USDC against a risk-free staked ETH2 deposit at Coinbase?

great point and very similar to what I said that Staking services can mint their own stablecoin too to provide those loans.

Layman’s opinion here. Eth staking is gonna absorb a huge amount of the eth on the market especially from people looking for safer plays. Integrating liquid staking tokens as collateral AND a maker controlled staking service seems necessary to be maximally competitive.