For Centrifuge RWA collateral type, the DROP token of a Tinlake pool, HT2DRP in this case, is managed by MIP22 and interfaced with Maker Protocol through MIP21 and the creation of a placeholder token, by the deployment spell, RWA004 in this case.

For this assessment, we will be focusing on the MIP21 token RWA004 (to be deployed) for Harbor Trade Credit Series 2 HT2DRP token, as well as the infrastructure for all centrifuge tokens.

The overall architecture is an integration between a Tinlake pool and Maker Protocol by using first MIP22 to manage the Tinlake DROP token (HT2DRP) then using MIP21 to handle a placeholder token (RWA004) and interact with Maker.

While MIP22/HT2DRP is discussed for the sake of comprehension, only the MIP21/RWA004 is considered for the scope of this assessment.

The implementation of MIP22 cand be find in the tinlake-maker-lib Github repo. The main contract is TinlakeManager.

The state diagram below shows the different stage of the smart contract and the transitions between them. It is important to note that there is no way to go back to an active state when a liquidation is started. 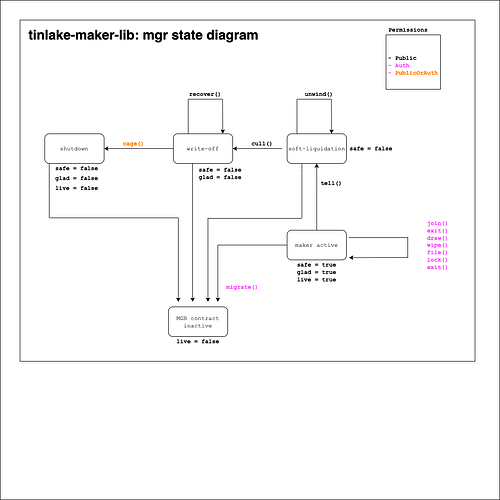 MIP22 operator is the MKR adapter on Tinlake called the clerk. It will use the mat defined in the ilk and matBuffer (clerk parameter) to check how much DROP tokens should be send to MIP22 in order to mint DAI.

MIP21 is the component that prevents the Tinlake pool from minting more than the Debt Ceiling (line) and provides the ability for Maker Governance to trigger a liquidation. MIP21 by itself does not ensure that enough collateral (in the form of HT2DRP) is present.

The core RWA architecture consists of the following contracts:

The RwaLiquidationOracle contract is shared across all MIP21 collateral types and consists of six state-changing functions (besides the usual DSS rely(address), deny(address)), all protected by the auth modifier and can only be called by governance:

There is one externally accessible view function: good(bytes32) that anyone can use to check the liquidation status of the position. This function does not change state.

This is not a typical Maker oracle. It will only report on the liquidation status of the RwaUrn, and can only be acted upon by governance. To state it plainly, this oracle is not vulnerable to flash loan attacks or any manipulation aside from a governance attack.

file can be called by governance to change the vow address (used in cull).

init is the initialization function. It takes 4 parameters:

bump can be called by governance to increase (not decrease which can be done only by cull) the estimated value of the collateral.

tell can be called by governance to start a soft-liquidation. line should be set to 0 Dai first. tell of MIP22 TinlakeManager should be called then (public function).

cure can be called by governance after a soft-liquidation has been triggered to stop it. It should not be used if tell of MIP22 TinlakeManager was already called.

cull can be called by governance to start an hard-liquidation/write-off. This will mark all the remaining debt of the vault as bad debt and impact the Surplus Buffer (vow). cull of MIP22 TinlakeManager should be called then (public function).

The RwaUrn is unique to each MIP21 collateral type. Aside from the core DSS wards, can, rely(address), deny(address), hope(address), and nope(address) functions, there are five functions:

The file function can only be called by governance (via the auth modifier).

The rest of the functions can only be called by those who have been given permission (hoped or noped) on the RwaUrn contract. And any Dai drawn by the RwaUrn can only be sent to the outputConduit address defined by governance when deploying the contract.

A standard implementation of the ERC20 token standard, with the balanceOf(address) of the deployer of the contract being set to 1 WAD at deployment. There is 18 decimals of precision.

There are three state changing functions, that are all available to the tokenholder, and are specific to the ERC20 token standard:

To reiterate how simple this ERC20 token is, please reference the Surya Description Report section below and compare it against other ERC20 token assessments.

A simple contract with one function: push() that can be called by anyone with a current MKR balance. This function holds transitory funds, that upon being called, are transferred to the to address set using the pick function by those who have been given permission (hoped or noped).

The MIP21 construction contains low technical risk and is bounded by the debt ceiling. The PE core unit has given a reasonably deep review to the manager contract that acts as the RwaConduit and resolved any issues there; however, only a surface review was given to the details of tinlake liquidations. This is where technical risk may exist. As of the time of this writing, this code has had a 120 people hour audit, and is currently undergoing more audits. Our team suggests a more conservative treatment of the debt ceiling to limit exposure to this unknown technical risk until more audits can be performed. This debt ceiling consideration should span across the aggregate of all collateral types using MIP22 until more audits are available.

The ERC20 functions of the RwaToken are implemented to industry standard, but do not mitigate the allowance race-condition or use a SafeMath library. This is of minor consequence, as actual usage of the approve(address,uint) function should be constrained. Future, more advanced implementations of RWA that will trade on markets should not use this implementation.

The core functions of the contracts are very limited in ability, and are restricted only to governance or the trusted addresses to lock, free, draw, or wipe Dai in the RwaUrn. Compared to a standard ERC20 token with administrative functions and multiple admin/controller addresses, this is a considerably lower risk contract.

The ERC20 token contract does not inherit other contracts.