dust is the minimum permitted debt for a vault. Users must borrow at least this amount to open a vault, and cannot repay their debt below this amount unless they pay off the entire remaining balance. Higher dust values make vaults less accessible for smaller users, but also protect Maker from risk of vaults being too small to liquidate profitably. You can learn more in the documentation here.

Gas prices have recently been elevated (between 100-200 gwei on average with some short term spikes). In these conditions, it is reasonable to expect gas could reach 1000 gwei or more during a sharp price crash. The price of ETH has also increased around 50% in the past 3 months, which impacts the relative cost of actions for a given vault size in DAI.

The NFT market has cooled, so there is somewhat less intra day variance in gas prices (which had previously been caused by NFT drops). Current network usage is being led by increasing defi yield farming activity, along with return of dog and meme token trading that drove gas prices for a period this spring.

Due to rising ETH price, our existing dust limits offer relatively less protection against losses from smaller sized vaults. In the past, Maker has adjusted dust limits with a target to be hedged against at least 1,000 gwei gas prices with a 15% intra hour price decline (or 25% decline for small cap collateral assets), as these conditions are likely to occur within a crypto market cycle.

It’s also worth noting that the effective cost of using a small value Maker vault has increased due to higher gas expenses and ETH price, so the total lost opportunity from the higher dust limits may not be so large. And the breakeven point where it makes sense for users to defend their vault versus suffering the liquidation penalty has also declined across vault types 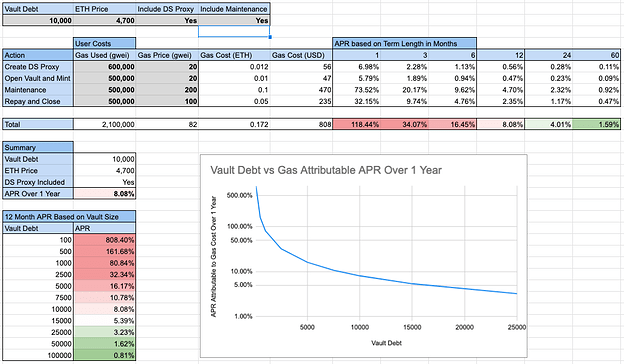 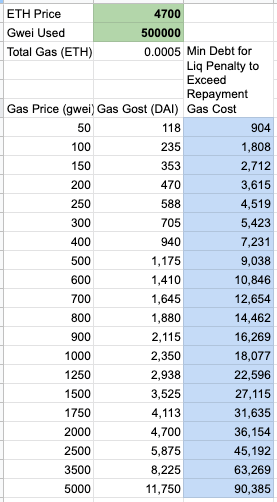 For ETH-A, our current dust limit of 10,000 offers protection with 15% intra hour drops and up to 700 gwei gas (versus around 1200 gwei gas at our last review). ETH-B’s 30,000 DAI dust limit protects against up to 900 gwei gas with the same 15% intra hour drop, while ETH-C’s 5,000 DAI dust hedges against up to roughly 700 gwei gas. Similar dynamics play out for our small cap collaterals, which have seen their margin of safety decline as well as ETH and gas prices have risen. 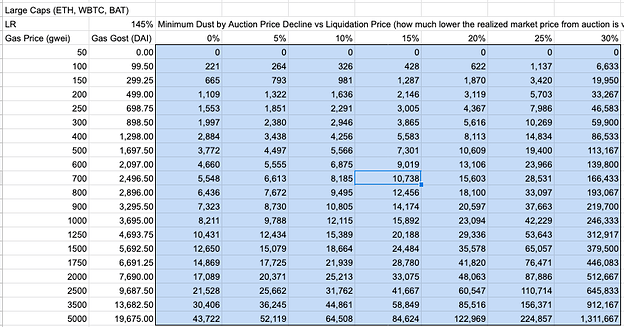 To return to the previous margin of safety, Maker would need to make the following changes to vault dust limits:

If the Maker community wants to keep a small size vault option, the ETH-C vault type could be maintained with the existing 5,000 DAI dust limit. This vault type has a higher collateral ratio, so Maker bears relatively lower risk of liquidation losses at a given vault size, and there is also lower ability to stage an auction grinding or dust attack

The figure below shows the rough number of vaults affected by the dust limit change for top collateral types (data as of 11 November 2021).

In the table, “active vaults” means currently open vaults that are above the preexisting dust limits, while “impacted vaults” are the subset of active vaults that would be below the newly proposed dust limits. Overall, we see slightly more than 10% of our active user base would be affected by these changes, but there is significant variance depending on vault type. The volume of debt impacted is significantly lower (as a few large borrowing positions skew the average), consistently well below 1% of total debt.

When vaults are below the required dust limit, automation services like DefiSaver that protect vaults from liquidation may not work properly. Reviewing the existing positions for the above vault types, we see in most cases there is at least a 30% buffer before any vault would be below the minimum collateral ratio. So users should be able to adjust their positions and automation mechanisms without immediate risk of liquidation.

Any ETH-A vault users would be able to migrate to ETH-C vault type if they wish to make partial repayments or collateral withdrawals; among the 243 impacted ETH-A users the median collateralization level is over 450% with minimum of at least 200%, so these users would already be above ETH-C’s required 170% collateralization ratio.

Impact on the 71 existing ETH-C users with below 7,500 DAI borrowed could be mitigated by waiving the dust limit increase for this vault type, keeping the existing 5,000 DAI threshold. This would subsidize some of the excess liquidation risk from small vault users to help maintain accessibility.

Do you support increasing the dust parameter for all vault types excluding ETH-B and ETH-C from 10,000 to 15,000 DAI?

Do you support increasing the dust parameter for the ETH-C vault type from 5,000 to 7,500 DAI?

This poll will close on Thursday, November 25. If a majority of forum voters support changing dust limits, this will more forward to on chain polling the following week.

Seems like this poll is a waste of governance bandwidth. Can’t we have a MIP with an agreed upon formula and just update semi-automatically?

The last time we had a signal request to adjust dust limits was in May, so while this does add to governance workload I don’t think the burden is very high right now. But definitely still worthwhile to make the assessments/recommendations more systematic! I’ll try to sketch out a framework below and think about next steps to make it a formal procedure within the MIPs framework.

The gas price and drawdown buffer values are somewhat more subjective; here we’re deciding how much of a margin of safety we’d like to have for market crashes. Generally I have used ~15% drawdown buffer for large cap assets and 20-25% buffer for small caps - this takes account of any price falls below a vault’s liquidation price during the 1 hour OSM delay, plus slippage from selling collateral and liquidator profit margin. For gas price, I think we should account for the greater of 1,000 gwei gas or 5x trailing average gas prices over the past month, as gas spikes are likely during liquidation events. Both of these values are open to debate and optimization based on the community’s risk tolerance.

This is pretty much all we need to implement a rules based dust management system. Whenever the formula’s suggested dust limit is some margin away from the current dust limit value (eg 5,000 DAI), a parameter change could be automatically queued as a governance poll without requiring a signal request or forum voting.

One aspect that I think should be added to the discussion is that there is a narrative going around that “Maker is only for rich people”. These changes feeds into such a narrative even though I generally think they are warranted.

Having high dust limits across the board does make it harder for smaller holders to take part in the Maker community. I think it is therefore prudent to try to maintain a lower dust limit for ETH-C Vaults. Even 5.000 DAI can be a substantial investment for a smaller holder or someone coming into crypto for the first time, but 7.500 pushes that bar even more outside of reach of smaller investors. This also has a knock on effect that people entering the scene later has less possibility to grow their investments potentially putting them behind and unable to gain entry before the dust limit is raised once again. I fear it will negatively impact our growth if we exclude too much of the investor population.

On the opposite side of this argument is the ETH-B Vaults which are clearly meant for investors with an appetite for risk. These should also be prepared to put up the collateral and values necessary to ensure that the protocol does not run at a loss in the event of liquidation.

I dislike such workarounds. Smaller users are priced out from Ethereum L1 in any case (high fees). It’s got nothing to do with Maker.

The narrative is actually: “Ethereum is only for rich people”.

At 5000 DAI it doesn´t make sense anyhow to open a vault due to the high gas costs related to the operation. It´s more of a PR issue than leaving more people out, if you quantify the costs of operating with ethereum few if not none would open a vault with 5k in this current gas cost enviroment.

I understand the view, it´s unpretty but true, however it´s an ethereum issue for being in L1 and within that complexity we must ensure that the system works as intended protecting everyone involved, the system will not work as intended if keepers don´t bid for the collateral and they will not if the operation is not worth it.

At 5000 DAI it doesn´t make sense anyhow to open a vault due to the high gas costs related to the operation. It´s more of a PR issue than leaving more people out, if you quantify the costs of operating with ethereum few if not none would open a vault with 5k in this current gas cost enviroment.

This is a very valid point in general. However if you’re opening the vault for leverage those 5k would need an increase in value that is not unreasonable to take a bet on given the volatility in crypto.

Regardless I think it makes sense to leave the dust limit at 5k to at least try to paint a prettier picture. As long as keeping these vaults at 5k dust limit doesn’t cause undue risk (which the proposal seems to suggest it does not), I think there is an argument to be made for keeping it at 5k.

If you look at the data the increase in dust limit would affect the largest portion of vaults of all the ETH vaults (14%), so this isn’t just a matter of attracting new vault holders, but also a question of leaving room for some we already have.

Thank you to everyone that participated in this Signal Request.

The following polls had a positive outcome exceeding 50% of votes cast so will proceed on-chain next week:

The following poll did not have a positive outcome exceeding 50% of votes cast so will not proceed to an on-chain vote: