For moving ahead with future changes on the parameters for the D3M I would like to ask the community on behalf of the MOMC for some guidance.

Polls are related to two D3M governance parameters, bar as the Target Borrow Rate and line as the Debt Ceiling of D3M. First, see how the bar parameter affects D3M behaviour:

Importantly, the other crucial limiting factor is the line parameter. Namely if line is too low, the target borrow rate on the way down won’t necessarily be reached. It is safe to say that the line parameter is our last line of defense in terms of risk, while the bar parameter plays an important role when determining how competitive Aave rates should be compared to Maker.

Few words on competition. As seen below, the current DAI borrow rate at Aave is 3.9%. But when including Aave liquidity mining rewards on both ETH deposited (2x because of 200% average CR) and DAI borrowing, the real net cost when borrowing DAI from ETH at Aave is only 2.34% at the time of writing. 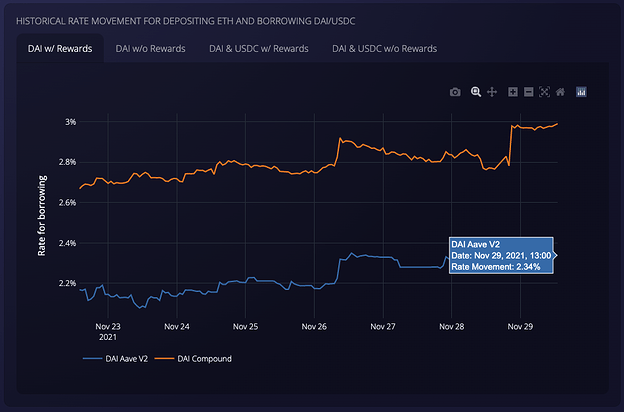 This means Aave is already more competitive for borrowers even at the current 2.5% ETH-A SF. There are other competitive factors to consider though:

All these competitive factors need to be weighted against each other to decide on the proper bar parameter. Also note that Maker alone won’t be able to control rates completely because its effect is limited by the Debt Ceiling value, which is a function of other risks that we’ll address later.

The poll therefore asks the community to decide on the spread between borrowing DAI at Aave (incl. Aave rewards) and ETH-A rate. The spread can be negative and amounts to about 0.35% in favour of Aave (assumed 2.75% ETH-A SF poll wins). To make calculation easier, if the target borrow rate is 3.9%, the Aave rewards amount to about 1.5% so the net cost at Aave is only about 2.4%.

As said, any negative spreads won’t be necessarily realized unless D3M DC is sufficiently large. And any positive spreads also won’t be realized in the current environment, since rates at Aave are already more competitive than ETH-A even without D3M right now.

The last poll asks the community for D3M Debt Ceiling defined as line. @Risk-Core-Unit already recommended that D3M exposure shouldn’t be more than 10-20% of current supplied DAI on Aave v2 market because of the liquidity risks faced (in equilibrium and because of the rate curve market utilization is usually around 80% at Aave). This means the D3M DC could reach between 200m and 400m. But, the trick is to know what the actual DAI supply at Aave is right now as the numbers are skewed due to recursive stablecoin liquidity mining.

We have made a dashboard that tracks “real DAI supply & borrow” at Aave, including credit risk for borrowed DAI. Importantly, borrowed DAI is mostly collateralized by DAI - a technique that optimizes liquidity mining yield. This means that the true organic borrow (i.e. risky debt) is much smaller than what numbers show - 354m DAI instead of 1.7bn. Same also holds for DAI supplied, since most of it is just reborrowed DAI - the real supply is only 837m DAI instead of 2.17bn.

This means that our D3M DC recommendation as 10-20% of current DAI supplied gives us a proposed range of 85m to 170m (because real DAI supply is only 837m).

Last few words about credit risks: Graph below is also important as it shows how organic borrowed DAI is collateralized. It mostly consists of WETH and WBTC as collateral, but there also is a smaller share of MKR. This shows the current credit risks of the DAI market is low - it is collateralized mostly by healthy and liquid assets with a healthy C-factor. 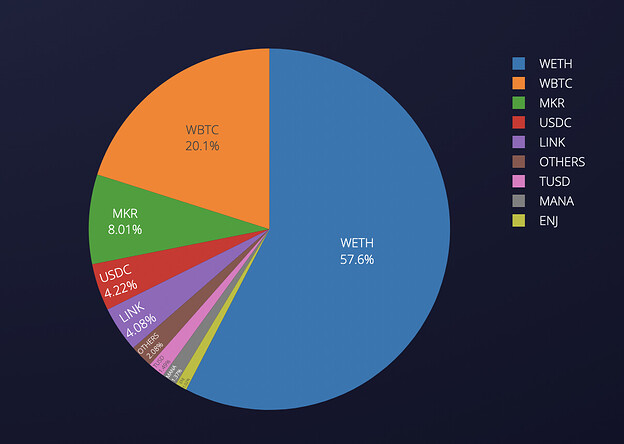 Other risk factors to be mentioned as many times until now:

Poll 2: What should be the D3M Debt Ceiling:

The last two parameters are DC-IAM related, which are gap and ttl currently set at 25m and 12h. We will adjust those proportionally based on the winning DC figure.

This Signal ends on December 9th and the winning votes will be included in an on-chain poll in the week of 13th of December.

I believe it is absolutely vital that we guarantee, with no possibility of slipping up due to some edge case, that the Maker ETH-A vault is always cheaper than Aave.

The fact that we are currently more expensive than aave is like an open wound for our long term business and growth in my opinion, and it should be unacceptable.

Only acceptable answers are 4.75% an 5.25% borrow rates, as these are the only options where Maker is ensuring it’s own competitiveness - and don’t forget that Aave also has a significantly better terms for LTV, so it is not even clear that Maker is obviously superior even with these options.

As for debt ceiling I believe it should be set very high, and voted for all the highest options myself. But pls lets not use the D3M to suicide our own core business, thx.

Thanks a lot @primoz!

Could it be happening that a lot of the recursive DAI farming on Aave stops as soon as we push the effective borrow rate (and with that the supply rate) low enough and by that the need for us to supply (unreasonably) huge amount of DAI through D3M is not so high anymore?

I would like to see the spread between us and aave as small as possible.

Could it be happening that a lot of the recursive DAI farming on Aave stops as soon as we push the effective borrow rate (and with that the supply rate) low enough and by that the need for us to supply (unreasonably) huge amount of DAI through D3M is not so high anymore?

I think it is more likely stablecoin recursive farming stops when their liquidity mining get significantly reduced or dropped at some point. Aave already reduced their rewards by 30% recently and DAI suppliers get 33% of the market reward instead of 50% before. I also think the plan is to adjust rewards down every 3 months.

If stablecoin recursive farming goes away, the market utilization will increase and so will rates, because these users are still net DAI suppliers right now. This is beneficial for competitive risks and higher bar while earning nice yield. But the liquidity risks becomes larger as D3M would own very large share of the pool.

Aave doesn’t have a concept of debt ceiling implemented meaning any bad collateral can potentially rug D3M. This is expected to change in Aave v3.

Well, that’s the thing right–AAVE Risk parameters are currently spread out across just about every L1 that you can’t think of–shouldn’t we wait for v3 to go above 200M of real DAI supply? Also, any thoughts on the implications (if any) of having an implied bar at 4.25% or higher when AAVE launches its institutional DeFi platform Aave Arc?

Thanks for the detailed Signal Request, Primoz.

From a GovAlpha perspective, in keeping with this post, I just wanted to layout the position for moving to on-chain polls.

For the 1st Poll: What should be the spread between Aave DAI net borrow cost (incl. rewards) and ETH-A (assuming currently winning polled 2.75% SF)?

If none of the options receives more than 50% of the non-abstain votes - they will not progress to an on-chain vote, and the status quo position will be to keep the current bar of 3.9%.

If more than one option receives more than 50% of the non-abstain votes, they will be offered on-chain using Instant-runoff voting.

For the 2nd Poll: What should be the D3M Debt Ceiling?

If none of the options receives more than 50% of the non-abstain votes - they will not progress to an on-chain vote, and the status quo position will be to keep D3M Debt Ceiling at its current value, which is 100 million DAI.

If more than one option receives more than 50% of the non-abstain votes, they will be offered on-chain using Instant-runoff voting.

In the event of an on-chain poll, the “No” option will be the current Debt Ceiling of 100 million DAI.

Please bear the above in mind when submitting your votes and remember that you can vote for more than one option in these polls.

On a positive note in light of the recent hike in dust limit on our vaults, I think the D3M provides a nice alternative path to put DAI from Maker into circulation for those who can’t meet the current dust limits. So there is a chance we’re providing DAI which would otherwise would be out of reach to certain segments of users. As a consequence I don’t think all growth from the D3M is taken out of growth from Maker vaults.

I totally agree we should aim for providing the cheapest source for DAI especially on ETH-collateral. With ETH-C we are clearly there already, ETH-A is probably on the edge right now.

However, with the high gas-costs to open and maintain a vault at Maker and related to that the high dust limits we have in place, we are not in a good position to provide DAI to the average Jane&Joe anyway. There is a disturbing analysis over here that reinforce this observation.

From my PoV the most important topic should be to make DAI the best stablecoin available, we need to aim for increasing our footprint. If we can’t deliver on that by providing DAI from vaults, we should try to satisfy the needs by secondary protocols (here: AAVE). Trying to provide a stable and low borrow rate for consumers on AAVE is a nice instrument we now have.

Big whales don’t have this option, as we are the only one who can actually mint DAI.

This is why I voted for a negative spread (-1.0% + -0.5%) and the highest DC available in this poll (290 MM to 210 MM). I am fine with flooding the DAI supply at Aave directly from the protocol through D3M (of course with the addition of trusting the observations by @Risk-Core-Unit )

I don’t think it is a bad decision to allow for secondary markets to provide a lot of DAI through D3M - a low variable rate is good for increasing the DAI footprint. And we do make some profit with this as well. But we for sure should try to keep DAI-from-vaults as high as possible as well.

This signal will be advancing to the onchain polling stage on Monday. I had some concerns about the level of participation, but the high level of abstain votes (which as a reminder should mean "I am comfortable with any option listed) implies it might be good to get some clarity from the MKR Voters. There are no planned executives until January, so there should be plenty of time for Parameter groups like the MOMC to respond to market shifts during the break, should they occur.

As for the polling stage itself, the best option seems to be to split this up into two separate polls.

Binary Vote on changing the spread between Aave Net Borrower Cost and ETH-A SF to -0.5%

Since this poll is asking for guidance for the MOMC, it will not have an executive expectation attached to the Outcomes. Instead it will help the MOMC know how the community and MKR voters fell about the D3M parameters, so they can issue effective guidance in the future and explain why their recommendations deviate from community sentiment (if/when they do).

The on-chain votes for this Signal Request have now concluded, the winning options were as follows:

The MOMC will consider these results when making parameter suggestions in future. Thanks to everyone who participated in this discussion.