I don’t think that this is a safe assumption. With multiple AMM’s there are now legions of arbitrage bots working non-stop to smooth out price discrepancies between Uniswap, Sushi, 1inch, Balancer, Curve, and everyone else. Each new AMM increases network traffic by an exponential, rather than linear factor. High fees and high demand are the new paradigm for Ethereum, and increasing the block size only provides a short-term subsidy for traders until we’re back at the prices we’re at now. The market is telling us that it’s willing to pay these prices for transactions, and increasing the throughput will only increase the number of transactions on-chain until we’re back to our current rate.

This is not my assumption, more an extrapolation based on data. After 30 min of full blocks, the BASE_FEE grows exponentially to help smooth demand, at a certain point the arbitrage bots will find their profits eaten away and wait for the BASE_FEE to drop.

I pulled a chart and a quote from last summer’s Deribit writeup by Hasu and Georgios.

State of extended congestion: It should be now clear that EIP-1559 allows for larger blocks for a short period of time, but not a longer period. After only 30 min of burst demand, the BASEFEE for a simple 21000 gas transaction will have surpassed $1000 (assuming initial BASEFEE = 1 Gwei).

The only way for BASEFEE to return to more “normal” levels is for blocks below 10m to be mined. 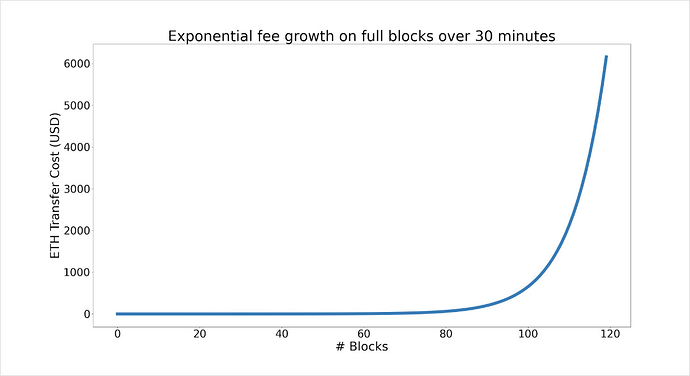 Won’t that cause a lot of griefing of oracles? I could see another Black Thursday type event if it’s a lot easier to pump gas fees up. If we see another major market downturn, oracles will be frozen because gas fees will be insanely expensive as arbitrageurs and users run to DEXs/lending platforms to unwind positions. High gas fees won’t stop people from panicking and stop transacting to lower fees, it’ll cause even more panic no?

Whatever the fees are (minting + average gas costs), the mining process is a commodity. It means the largest miners (buying power) with the lowest energy costs increase capacity until it’s no longer profitable for them

After 30 min of full blocks, the BASE_FEE grows exponentially to help smooth demand

This is new to me. Happy to see and learn this. Do you have the equation? thx

Not sure PoS will change much.

The issue / challenge is how many people have 32ETH. No question that today it can be run from home… I hope it stays that way for the long-haul to avoid centralization. In my eyes, concentration of staking will only occur when there are so many shards that the local box just cannot keep up with the storage (and possibly networking) requirements. Today, I have the beaconchain (mainnet) running just fine a Raspberry Pi (and NUC). PoS most certainly fights against centralization (unless stakers decide to “just use” AWS).

I would encourage everyone to run a validator. Ignore the economics for a moment, participation in the network help advance decentralization.

you may be misunderstanding. it’s not “easier to pump gas fees up” to get to an exponential rise of the BASE_FEE, there would also be paying users that have burnt ETH to get there.

Meaning, there are real costs associated with manipulating the BASE_FEE, such that it would be prohibitively expensive to do so.

The situation would be no different than in previous times of ETH volatility and spiking gas prices.

I’m not worried about miners pumping up gas fees, I’m just concerned about the increased possibility of extreme network congestion during panicky times.

EDIT: just learned I’m capped at 3 replies per topic because I’m new here. If you have more questions for me, please hop in the #1559 discord and I can answer them there

Thank you! I wish this concise response was circulating in twitter!

EDIT: just learned I’m capped at 3 replies per topic because I’m new here. If you have more questions for me, please hop in the #1559 discord and I can answer them there

Fixed. Stay as long as you want

Regarding the effects of mining concentration from PoW - it’s not entirely clear what is optimal. Having too much centralization is definitely very bad, but there are also diminishing returns on decentralization.

Ideally, we’d also like participants that have a lot invested in the system, such as their career and multi-million dollar facilities. These two properties exist virtually, by design, in most DPoS systems, as well. An acceptably decentralized number of validators is targeted, and validators wishing to compete (along with their delegators) must put money on the line to prove their commitment.

I’m still not entirely convinced PoS will be able to compete with PoW from strictly a security perspective. There are many edge cases to consider, and compromise is usually permanent, barring a coordinated manual intervention fork.

That said, security should only exist to serve a goal. And what is the goal of Ethereum?
I do not see it as the ultimate store of value, nor do I think it can compete for such a goal. Such a goal implies being conservative, simple, and highly secure. Ethereum is adaptive, fast moving, even experimental at times. It strives to unlock functionality, and ether is the use-token that is meant to be used for interaction.

Because of this nature, I think it’s best left slightly inflationary, despite that I’d personally profit otherwise. Inflationary money is typically spent more easily, and that environment attracts more applications.

I do think the adaptive block sizes in EIP-1559, and PoS/sharding from Eth2, are all great fits for the protocol, though. And @brianmcmichael makes an excellent point that MakerDAO would probably prefer deflationary collateral. So perhaps it’s worth accepting regardless.

Does anyone understand why the controversial burning clause was included in EIP-1559, rather than as a separate proposal? Functionally it seems a fixed fee with dynamic blocks should be entirely possible without the burning.

Yes, it enshrines ETH as an unavoidable token in the network. If the base fee wasn’t burnt (status quo) then miners could collude with people submitting transactions to get those transactions mined for 0 ETH and some other token exchanged via back channels. I have read that this has already happened on-chain, but I don’t have an example to point at.

Bumping this thread to hopefully get a few more people to weigh in. Thanks everyone for the discussion, I’ve enjoyed the questions.

Poll is now closed, it appears that the community is strongly in favour of EIP1559. There are a couple of suspiciously new accounts, but nothing that would change the outcome.

As detailed in the OP, I will also put this on-chain on Monday 1st March. That on-chain poll will conclude on Thursday 4th March.

Thanks to all who voted.

This is weird logic. If the cost of transactions increase then, eventually, demand will decrease. I don’t see how EIP 1559 affects transaction costs. Transactions costs are purely a function of demand for transactions.

Moving low value traffic to level-2 is the way to reduce level-1 congestion.

We don’t really know what will happen to demand, as our users are not the only ones using the network. I agree that higher costs will likely reduce demand, but let me elaborate on the real point I wanted to make about our users.

I will also point out that, we do not currently have an L2 strategy that is beyond the idea phase. Perhaps a more deflationary ETH that leads to higher transaction costs will make L2 our number one priority, but I believe deflationary ETH will hurt us before it helps us.

Looks like EIP-1559 has been accepted for the London fork scheduled for this summer.