I vote for the onchain poll. There is no urgency considering noone uses TUSD (no offense).

USDC contract can change tomorrow without any warning. TUSD is working with us and gives us the time to review before putting in prod. What is better?

On the other side, no one has checked what they (USDC, TUSD, PAX, …) do with the USD they have as collateral. Or their financial stability (that’s probably a plus for USDC tho).

Let’s not focus to much on the known risks when there are bigger unknown risks.

It also just seems like a really bad idea to even set the ceiling to 10M on a contract that has only been live for 48 hours.

One thing to note, the smart contract team reviewed the upcoming TUSD implementation 2 weeks ago.

@LongForWisdom and others- we’ve aimed to give you (and other integrators) as much time as possible to review the new contract and approve it before performing the upgrade. We didn’t know this emergency vote was coming, and so we planned on several weeks between delivering the code to you for review and actually doing the upgrade.

Things don’t always go as planned and we’re ready to roll with the punches! Given the situation, I think the best thing for us to do is upgrade as quickly as possible, which would be later today. This is not at all rushing code into production- this code has already passed an external audit as well as been reviewed by both the Maker and AAVE teams.

For next time, we’ll figure out how to make the process smoother.

USDC contract can change tomorrow without any warning. TUSD is working with us and gives us the time to review before putting in prod. What is better?

We never added such an implementation check for USDC, as we had not thought of it yet. Furthermore, we were unable to add the check for PAXUSD as that variable was private scoped. While I support the implementation check, I wouldn’t be surprised if the TUSD team, who have been extremely accommodating to our requests, start to feel as though they are being arbitrarily and unfairly treated.

We’ve (fairly) gotten a lot of shit for a serious mistake that we made: one time recently when we upgraded TUSD without telling integrators such as Maker. We messed up and are 100% responsible. It was unintentional and I hope our behavior since then has made it clear how we intend on operating going forward.

But I think it is worth noting that the transparency of our product, from our 24/7 real-time attestations to how our smart contracts are written, is part of what makes mistakes of this kind so glaring. As an example, I just went ahead and took screenshots of the stablecoins that have been discussed in this thread: 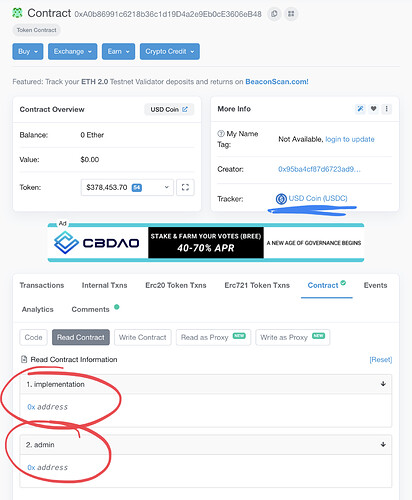 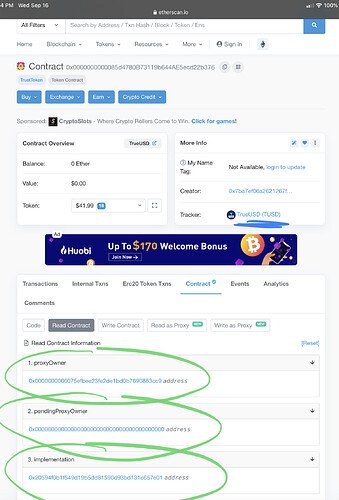 No this is not just one example, it goes all the way up and down the stack. You can click on the ProxyOwner and you’ll see it’s just as transparent. It is in turn owned by a Gnosis Multisig. If one of our banking partners were to make a $1 mistake you might see the real-time attestation dashboard in a “ripcord pulled” state (yes this happens sometimes, and yes it’s embarrassing, but that’s how transparency works).

We’re now working on putting the collateralization information from that dashboard on chain with Chainlink oracles. Once that’s ready, protocols such as maker can choose to have tripwires not just on implementation upgrades or ownership changes but actual collateralization thresholds. Yes this in some sense disadvantages us compared with other stablecoins where you just can’t tripwire on this stuff, but once again, that’s how transparency works.

No we don’t have the brand or capital of a big exchange like USDC does, but I think we’ve built a damn good product that gives every other stablecoin a run for its money.

Conclusion: I am voting in favor of a 50M DAI DC. There’s a lot our projects can do together and it’s time we get started.

we’ve aimed to give you (and other integrators) as much time as possible to review the new contract and approve it before performing the upgrade.

Yep, this is very much appreciated.

Things don’t always go as planned and we’re ready to roll with the punches! Given the situation, I think the best thing for us to do is upgrade as quickly as possible, which would be later today.

I’m aware that we’ve been asking you to jump through hoops a bit. Just want to say that personally I’m really grateful that you’ve kept the lines of communication open so effectively and taken feedback on board. I’m a huge fan of the level of transparency you’ve provided.

There’s a lot our projects can do together and it’s time we get started.

Would still rather we started with 10M and increased it over the next few weeks though.

@LongForWisdom very gracious of you. If that’s how you feel then I’m changing my vote to 10M. Rome wasn’t built in a day, and we don’t get anywhere by asking for something you’re uncomfortable with.

I hope you’ll be open to another vote when we hit the 10M cap, which may be quite soon

Given the situation, I think the best thing for us to do is upgrade as quickly as possible, which would be later today.

The TUSD upgrade is now complete.

As always, this new implementation has been audited by an external auditor as well as reviewed by the Maker and AAVE teams.

Agreed. Also personally I only assumed the contracts had been audited when I voted for 50M. But let’s move forward, start with 10M and go on from there.

Given the poll outcome, the call and input from the risk and smart contract teams, in the end we decided to go with 50M Debt ceiling for TUSD for today’s executive.

@LongForWisdom Oh thanks for closing the polls. Totally forgot that I needed to close it and didn’t set an alarm to wake up for it.

Daistats.com is already showing 25mm DAI borrowed against TUSD, which is 3.2% of all outstanding DAI. This is in ~48 hours of the vote being executed. I’d say this has been a success so far?

Thanks for pointing it out. I am a bit surprised but still it’s only 3%. I doubt that the percentage will grow. With or without TUSD, we are at +1% above the peg.

It’s interesting, but I’m not exactly sure if onboarding the other currency tokens should be a priority.

Other exchange currencies are completely different. Liquidation would need to be turned on, and you’d need higher liquidation ratios.

We just need to focus on USD stablecoins for now. Increase debt ceilings as needed. And work on onboarding more collateral at a quicker pace.

Exactly the opposite. Other fiat currencies should be a priority (I suggest adding all major ones at the same time) - they will attract new users while adding more USDC and new collateral will buy competition another 6 months to polish their stablecoin products while DAI is struggling to fix the peg.

We would need to turn on liquidations, so maybe we need liquidations v2.0 first, but having uncorrelated stablecoins would be very helpful, and give reasons to hold stablecoins besides pure arbitrage.

We’re planning on requesting a vote later this week proposing (a) a higher debt ceiling (b) approving a new implementation for the adapter (small code change, under audit right now).

Given the poll outcome, the call and input from the risk and smart contract teams, in the end we decided to go with 50M Debt ceiling for TUSD for today’s executive.

The Executive passed, and the following changes to the TUSD-A risk parameters modifications were put into effect.

This has been a great for enforcing the $1.01 cap on DAI and also diversifying MakerDAOs stablecoin exposure.

There is now a proposal to raise the TUSD DC to 135mm which we think makes sense. Linking here.

Hey all, Unutilized debt ceiling on stablecoins currently amounts to 90m (100m including USDT). DAI price seems to be more or less fixed around $1.01, but we shouldn’t underestimate new DAI demand from upcoming farms in the next few weeks. We learnt the lesson with SAFE when more than 170m DAI was drained out of liquidity venues in only a few days. We would also want to have an additional stablecoin debt ceiling buffer always ready that provides liquidity in an event of unwinding ETH and WBTC v…