[Signal Request] Should We Introduce a Performance Modifier to the Delegate Compensation Trial?

The GovAlpha Core Unit would like to propose a change to the Delegate Compensation Trial that is currently taking place.

We are proposing to introduce a Performance Modifier which will result in a reduced amount of compensation at lower levels of metrics with the following changes:

This is demonstrated in the below graph: 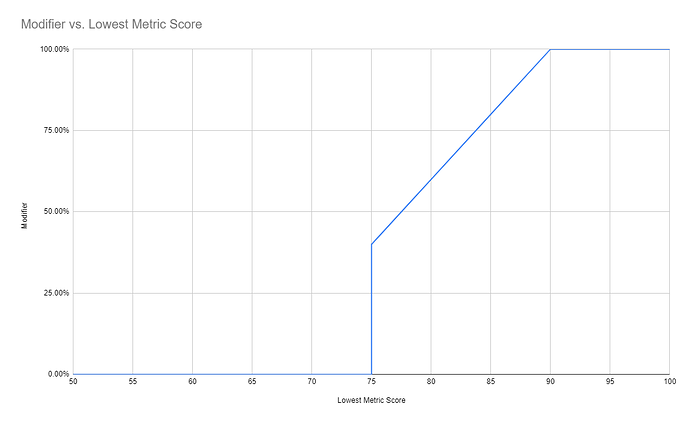 To demonstrate the effects of this new Performance Modifier, we have included the following example. These numbers are not based on the performance of any Recognised Delegate but are purely illustrative:

We believe that this Performance Modifier increases the fairness of compensation for Recognised Delegates while still encouraging them to have metrics as high as possible. The above example shows the importance of higher metric scores by awarding Delegate C more compensation than Delegate B despite having 4000 fewer MKR delegated.

Should We Introduce a Performance Modifier to the Delegate Compensation Trial?

This poll will close on Friday, December 10 at 20:30 UTC+0. If a majority of forum voters support this change, this will move forward to on-chain polling the following week.

I also think this is a sensible way to go. The danger is that delegates dropping below 90% can fall into a negative feedback loop where it is not worth their time / gas to vote and communicate, because their stats are low enough to be hard to recover from.

Delegates can be especially prone to this early on, as we’ve seen with a couple of the delegates. It’s easier to make mistakes when you’re new, and we don’t want delegates to accidently miss a few votes, then miss out on compensation for potentially multiple months.

The proposed scale mitigates this issue by more gradually applying the penalty as metrics decrease.

It also makes involuntary absence easier to deal with and recover from. And frankly it also allows delegates to take a week off and not worry about being too harshly penalized.

The flip side of this is that it makes the compensation calculation slightly more complicated by adding an additional term. Given that we can automate calculation and share links to the google sheet calculating compensation (including comments to explain each stage of the calculation) this feels like a worthwhile trade-off right now, especially when we’re in an ‘attract delegates’ phase.

A positive outcome for this Signal Request does not necessarily result in an update being applied to MIP61 but only impacts the ongoing Delegate Compensation Trial. We hope that the author of the Signal Request will recognise the view of Maker Governance and include these changes in the MIP should this Signal Request be successful.

Theoretically, you can submit a comment when you vote and then we could organise that by vote in a UI somewhere, but then that introduces extra complexity for the delegates

but then that introduces extra complexity for the delegates

How so? If the justification forum post is no longer required then the delegates are still only reporting their justification once.

Are communication and voting metrics an “all-time” score or are they reset regularly e.g. every month? If it is the latter, then I don’t think delegates fall into negative feedback loops or have initial mistakes during setup affect them in the long-term.

My view on this is that I think it is quite reasonable to expect delegates to vote and communicate at a high rate like 90%. Given that the compensation increases steeply from 75% to 90%, the financial incentive to be above 90% is very similar in both the current system and the proposed system.

While it might make sense for the trial period, I doubt this change will affect delegate behavior much.

Are communication and voting metrics an “all-time” score or are they reset regularly e.g. every month?

They are all-time and not reset. A month doesn’t give a reasonable period for MKR holders to get a good picture of how much a delegate will participation.

We could theoretically reset them annually, or over a different longer period, but I think this makes the most sense for now.

We could theoretically reset them annually, or over a different longer period, but I think this makes the most sense for now.

Oh! I had assumed you were doing a three or six month moving average or similar. Using an all-time average could lead to bad outcomes if a delegate performs well for a year and then underperforms. It would take a long time for the stats to reflect recent performance.

Using an all-time average could lead to bad outcomes if a delegate performs well for a year and then underperforms. It would take a long time for the stats to reflect recent performance.

Yes true, but if they drop off the face of the earth without giving us a heads up, we’ll probably just delist them as recognized delegates and stop paying them.

If they just get a bit spotty, you’re right, it could be bad. Maybe something like min(all-time, quarterly) or something makes sense in the long run. Or just a moving average as you suggested.

+1 to a moving average that’s on a reasonable time frame. Whatever is easiest on gov-alpha has my vote though.

This signal closes tomorrow and ideally we would see a bit more participation. If you haven’t submitted your opinion, please consider doing so.

Whilst still getting my sea legs, I’m strongly in favor of a scheme that shares compensation with part-time delegates or those who reach a reasonably high bar of participation with added incentives to exceed the minimum expectations. Directionally this proposal looks like a good adjustment to the status quo.

@GFXlabs and @MakerMan, I don’t want to derail your delegate platform threads but I just wanted to point out that there is no change to compensation for delegates whose metrics are between 90 and 100%, as a result of this SR.

I don’t want you to think you will be adversely effected by voting for this modifier. The only effect of this SR is allowing delegates with metrics between 75 and 90% a reduced rate of compensation.

As per the text of the poll:

when the lowest scoring metric is 90% or greater, compensation will be 100% of the eligible amount.

The on-chain vote can be seen here.

Thank you to everyone who participated in this Signal Request.