In this distribution, SourceCred funding has officially transitioned to the new tithing model. Previously, SourceCred (the project), was receiving a 5,000 DAI/month dev grant from the Foundation for support and new feature development. With the sunsetting of this program in March as part of the DAO’s decentralization, the GovAlpha Core Unit (CU) has taken over paying for SourceCred. As part of this transition, SourceCred proposed (and GovAlpha agreed to) switching from the flat 5,000 DAI/month amount to SourceCred’s preferred tithing model (used by SoureCred’s other partner communities), whereby SourceCred receives 5% of the total Cred generated while the tithe is active.

In addition, I (@s_ben) will be paid 2,000 DAI/month to continue providing priority support for Maker’s instance, as well as opting myself into payouts, as is standard practice in SourceCred’s other partner communities. At current distribution levels (~20k DAI/mo), this means Maker will be paying roughly ~2,500 DAI less per month than under the previous arrangement. If distribution were doubled, as proposed in a recent informal poll (worth a read!), from 20k to ~40k DAI/month, SourceCred’s tithe would equal ~2k DAI/mo, and total costs would likely be around 4.5-5k DAI/mo. We believe this aligns incentives well, as increased payouts increases the risk of gaming and other support costs. However, this is open to renegotiation as we forge into new territory. On a personal note, I requested to be opted into payouts so I would be incentivized to contribute here more. I’d like to post more on issues related to SourceCred, as well as decentralized governance, etc., and opting in alleviates the opportunity costs.

Cred scores and payouts may see volatility in the coming weeks and months as we tweak the algorithm and payout parameters. We still have a lot of work to do before the system is optimized enough to “ossify”, producing predictable payouts. Hint: it may be changing soon;)

This week $5,000 worth of DAI was distributed to 91 contributors. Navigate to the DAI Accounts tab of the Maker instance to see your current DAI balance and total DAI earned.

Below is a chart showing total Cred created (a proxy for work). After ranging in the ~3,500 Cred/week range for the last couple months, it appears the uptrend has continued 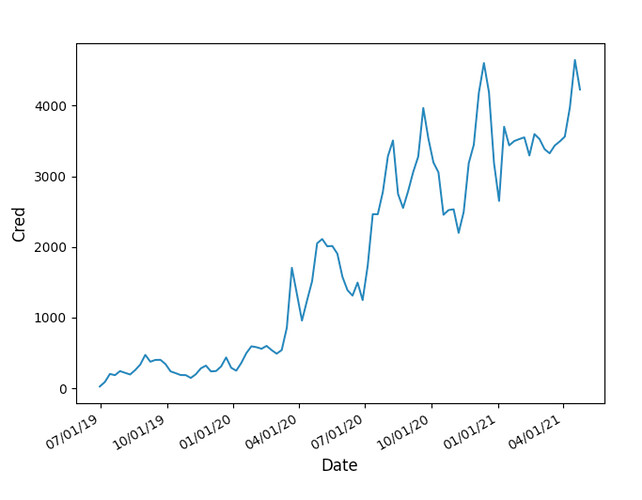 Just confirming that the announcements above are correct and expected on our side.

We’ve added @s_ben to the distribution at his request because we feel that he’s correct that it better aligns incentives, he’s also expressed an interest in getting more involved in Maker outside of SourceCred which this would reward more directly.

The tithe model is SourceCred’s preferred operating model for monetization and sustainability. 5% at this stage feels like a reasonable cost to Maker for helping to support the ongoing development of the SourceCred algorithm, which continues to benefit us.

Great to hear. Hope SourceCred continues to iterate a better product for the benefit of everyone.

Can I ask if these decisions were made on an on-chain poll? I agree with the decision itself but wasn’t sure what process was followed to permit GovAlpha to approve this.

Can I ask if these decisions were made on an on-chain poll?

I agree with the decision itself but wasn’t sure what process was followed to permit GovAlpha to approve this.

Mostly just that SourceCred is something that myself and a few others have been administering for some time. Currently SourceCred is being paid out of the GovAlpha budget because everything is still more or less manually operated. While we do intend to run any major changes in direction by the community in the form of polls, I don’t believe these changes really warrant that.

The described changes in payment structure equate to more or less what we were paying SourceCred + Seth previously, it’s more that we’ve just transitioned it away from the Foundation and into GovAlpha. The tithe does represent a small decrease in total distribution though, so we may consider increasing the total output some in the future.

The end goal with Sourcecred is to get it setup such that governance can vote on certain parameters directly (amount of funding, tithe %, potentially instance parameters and that these are enforced on-chain) at that point any change would require the usual governance processes.

In the meantime though, it’s dependent on the GovAlpha budget which means that by default we’re managing it. If Governance want to take a greater role in managing SourceCred, that’s very doable. If not, GovAlpha is happy to manage such that it doesn’t draw focus away from more important stuff like core unit budgets, collateral onboarding and general Maker-related things.

do you have any forumula of how the credit obtained is calculated and based on what parameters?

It can get a bit complicated, but can be understood at a higher level of abstraction. Here are a few entrances to the rabbit hole