This week $5,000 worth of DAI was distributed to 103 contributors. Navigate to the DAI Accounts tab of the Maker instance to see your current DAI balance and total DAI earned.

Below is a chart showing total Cred created (a proxy for work). 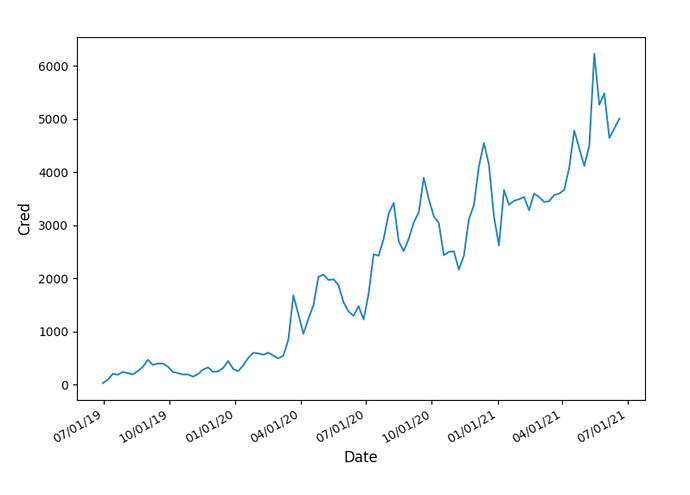 I see that the amount of Cred is roughly 5k… same as the Dai.
(We could put a cap higher up in case that the Cred skyrockets (for any reason) so that Governance is sure that this is not a loose end.

Reason for: the Dai given away would not be a zero-sum game (more people in the pool decrease your gains), and will be related to the actual week-to-week participation.

Reasons against: if our Community (forum participation) grows a lot, the Cred will as well, and this might be a higher than expected expense. (I don’t think this is a problem, seeing the value and the cost).

I didn’t know that cred had a value, so currently a Cred is above DAI?

And in response I think that everything for the benefit of the community and its development will always be seen by good eyes by me, as long as it does not affect the protocol in a negative way of course.

How do I link my metamask so I can collect?

If you are actively collaborating in the community you are usually contacted to be part of it, if not you must fill out a form and you will be contacted, note that the wallet you put there will be the one you use as I understand for posterity.

I will add that contacting people and encouraging them to opt in is relatively new. Most people have opted in of their own accord, and all are welcome.

I didn’t know that cred had a value, so currently a Cred is above DAI?

Nope. Right now everyone generates Cred, and then 5k Dai (

) is distributed based on a percentage (

So if we were to double our user base (ceteris paribus), you would get half the Dai if your activity was the same.

This means that, based on the current incentives model, you should not invite people to join and contribute (since that would be reducing your portion of the total pie). (Most people would argue that most people don’t do this for the Dai that is received, so this is not a problem).

My proposal is to give away cake based on absolute terms. 1 Cred = 1 Dai, since it seems that we’re at parity and people are OK with it. Happy to change that value as well (now or in the future).

My proposal is to give away cake based on absolute terms. 1 Cred = 1 Dai, since it seems that we’re at parity and people are OK with it. Happy to change that value as well (now or in the future).

I like that this is the way it is, that it remains at parity.

Very good that understanding, I agree that parity should be based on creed. I support this motion hehe. It is true that if you think about it carefully the current system is somewhat unequal in both directions.

Lol, a good governance facilitator knows how to minimize friction

Reason for: the Dai given away would not be a zero-sum game (more people in the pool decrease your gains), and will be related to the actual week-to-week participation.

As for precedent in other communities, I’m not aware of a 1 Cred = 1 token peg in the wild (doesn’t mean it don’t exist). Though the communities I’m thinking about also pay out floating price tokens, not stablecoins… They typically distribute fixed amounts, but adjust periodically, as Maker is doing.

Another lever we have available is the ‘cred budgets’ feature. It allows you to specify how much Cred is generated in a given week. That could be used to create a ceiling. If Cred goes beyond the limit, likes still count, but dilute the DAI/Cred rate overall.

Additionally, I’ve been working with GovAlpha on a feature that should allow us to more specifically target Cred flows, which would increase my personal comfort level with recommending increased payouts generally. 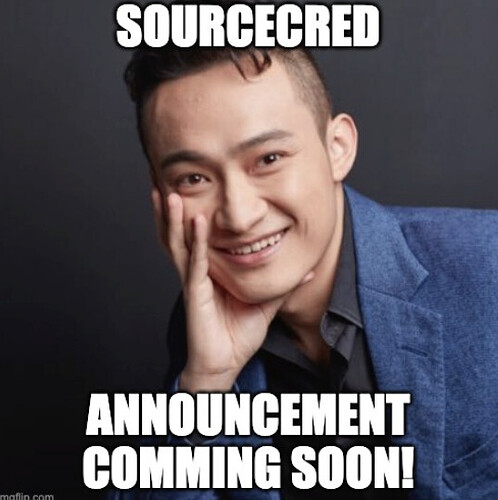 If with all that info you still feel strongly about a 1-to-1 peg juanuan, I’m happy to pursue this thread further.

Also, for the community at large, Is anyone feeling a zero-sum dynamic that is inhibiting them from inviting people, liking, or other behavior?

Is anyone feeling a zero-sum dynamic

Not me. I still think everyone should join and the DAI is just the cherry on top of the Maker cake.

You’re probably right. I didn’t have a strong opinion about this.

The other advantage of not equalizing them is that people that come to the forum exclusively to farm Cred should be disincentivized to do so after the pool has grown (provided that we don’t increase the Grain).

On another note, is there some “total Cred” stat somewhere? Ideally with a decay for old users.

Thanks for your work, @s_ben

As for “total Cred”, the Cred explorer shows a contributor’s lifetime Cred score and their percentage of the total Cred. But it seems you’re looking for Cred over time, with the ability to weight total Cred by time. We can see this indirectly already in the payout formula. Currently, 75% of DAI is distributed based on the "Recent’ policy, which weights contributions using an exponential decay, as illustrated below. Maker is currently using a decay rate of 0.4. 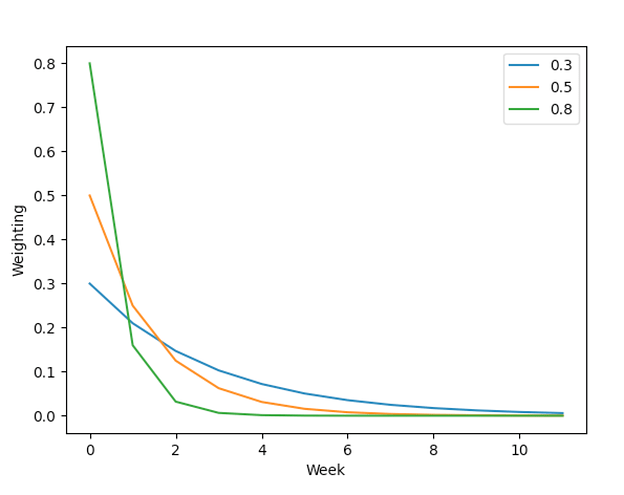 If you want to do your own analysis though, here’s a csv with raw week-by-week Cred data. This should allow you to apply your own decay functions if you like. Note: this is data from a test instance that uses a newer version of SourceCred than Maker has in prod, but the scores should be roughly the same as the live data.

The UI for the new version (comming soon) also shows Cred rankings by this week, last week, this month, and all time, which may be helpful. Here’s a hosted test instance that has those views.