This week $5,000 worth of DAI was distributed to 113 contributors. Navigate to the DAI Accounts tab of the Maker instance to see your current DAI balance and total DAI earned.

Below is a chart showing total Cred created (a proxy for work). 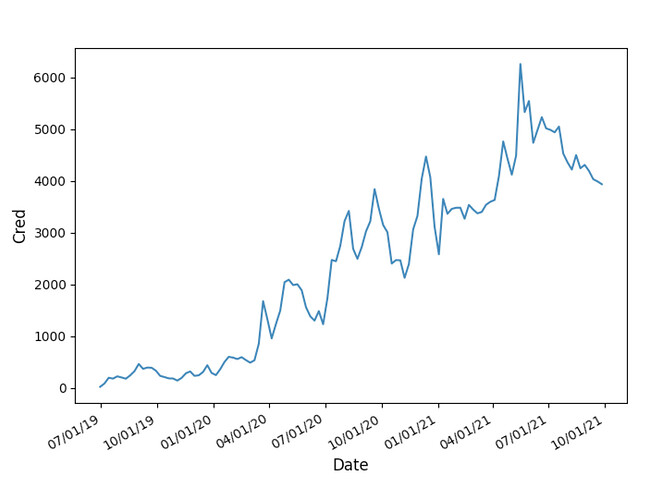 Below are the top 10 posts created in the last two weeks, ranked by Cred generated.

Below are the top 10 contributors last two weeks, ranked by Cred generated.

Hey man, have you consider integrating streaming payment services like Superfluid, or others alike? Easier said then done–but a similar tool would be cool, IMO.

I think these type of tool can attract users – nothing like watching a Yield Farm stream numbers into your wallet. There’s something about watching those numbers as they go up

I would love the idea, thinking about it a lot you keep track of where or which person you give so many DAI per cred (there is such a thing but it’s not pretty to look at), it would be a more tradable way to handle this kind of public data and could improve the existing transparency.

Streaming payouts would be so cool

Saw a proposal in 1Hive to do something similar. They stream payouts, as well as a vested token that’s locked up, presumably re-using the code and infra from Honeyswap and their farms that support time locks.

I would love to do something like this, but yeah, potentially a lot of work, and between Maker and SourceCred I’m really slammed these days, so hesitant to commit. But would def support if there’s community interest and help.

P.S. shoutout to Sablier, the original money streaming protocol, which got its start from a Maker dev grant.

Visualizing data in this way would definitely be interesting. I will be updating Maker’s SourceCred instance to the latest version in the next few days, and then this observable notebook can be used to trace Cred flows by person.

Excellent Seth I would love to see it, I’m curious and well sure it will be fantastic, when you make the announcement notify me

Visualizing data in this way would definitely be interesting. I will be updating Maker’s SourceCred instance to the latest version in the next few days, and then this observable notebook can be used to trace Cred flows by person.

Having that live data would be phenomenal, you can measure in my opinion what is interesting to the community in the Maker forum.